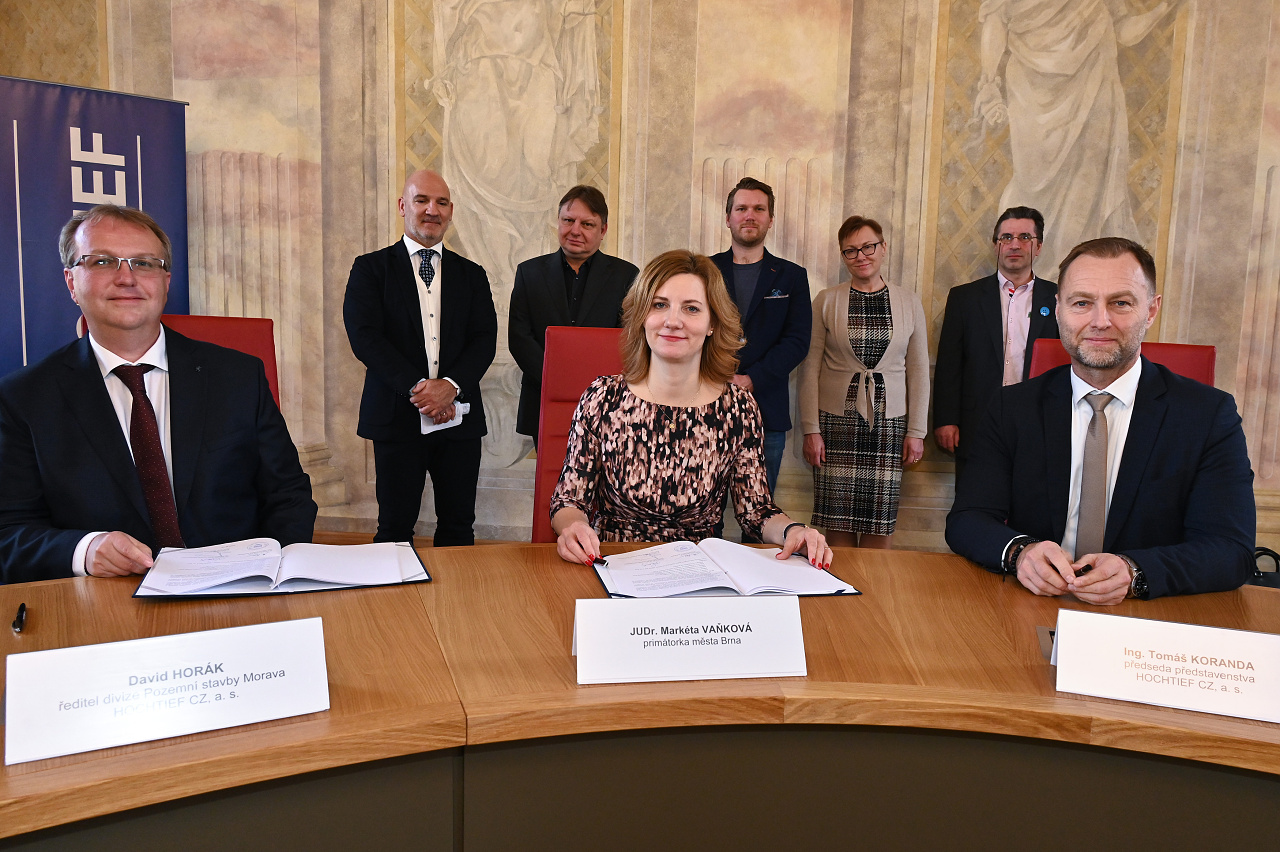 The Mayor of Brno, Markétra Vaňková, at the signing of the contract with representatives of the Hochtief company. Photo credit: M. Schmerková.

Brno, Jan 18 (BD) – On 20 February 2019, plans were approved to build a multifunctional hall at the Brno exhibition centre, and it received planning permission and a building permit on 19 June 2021. On Monday, the City of Brno signed a contract with Hochtief CZ, which will be the construction contractor for the project.

The hall will be composed of six above-ground floors and two under-ground, with a built up area of 16,698 m2 and enclosed space of 475,000 m3. It will have a capacity of 13,300 seats and 1,300 parking spaces. The layout was designed by A PLUS and Arch. Design. The parking lots, roads and engineering networks are to be built in parallel with the hall itself. The City of Brno awarded the contract along with the municipal companies Brněnské komunikace, Arena Brno, and Teplárny Brno.

The construction would be financed mainly by Arena Brno (which is owned 100% by the city) and a further CZK 2 billion loan from the city of Brno, with more funding to be provided by the South Moravian Region and the National Sports Agency.

The construction of the hall has not yet started, as negotiations for the conditions of the external credit financing and the partial layouts of interior design are still ongoing. “Construction of a multifunctional arena also calls for additional investments as this will lead to the recultivation of a large area near the centre, and therefore to the massive development of this part of the city,” explained Brno city councillor for transport Petr Kratochvíl, who is also chairman of the board of Arena Brno.

The procurement procedure was approved by Brno city council in December 2021; four entities submitted their offers within the deadline. The evaluation process ended at the beginning of October 2022, and Hochtief CZ was finally selected, with a project cost of over CZK 4 billion.

The contract was signed on Monday by the Mayor of Brno and representatives of the contractor. “We want to build a multifunctional trans-regional campus that offers the best conditions for organising cultural, sporting, trade fair and congress events at international level,” said Mayor Markéta Vaňková. “If Brno is to be a modern and attractive city, we must be able to take advantage of the opportunity that we have come this far and that the building is very well prepared. I understand today’s ceremonial signing as a declaration of our interest in continuing the project.”