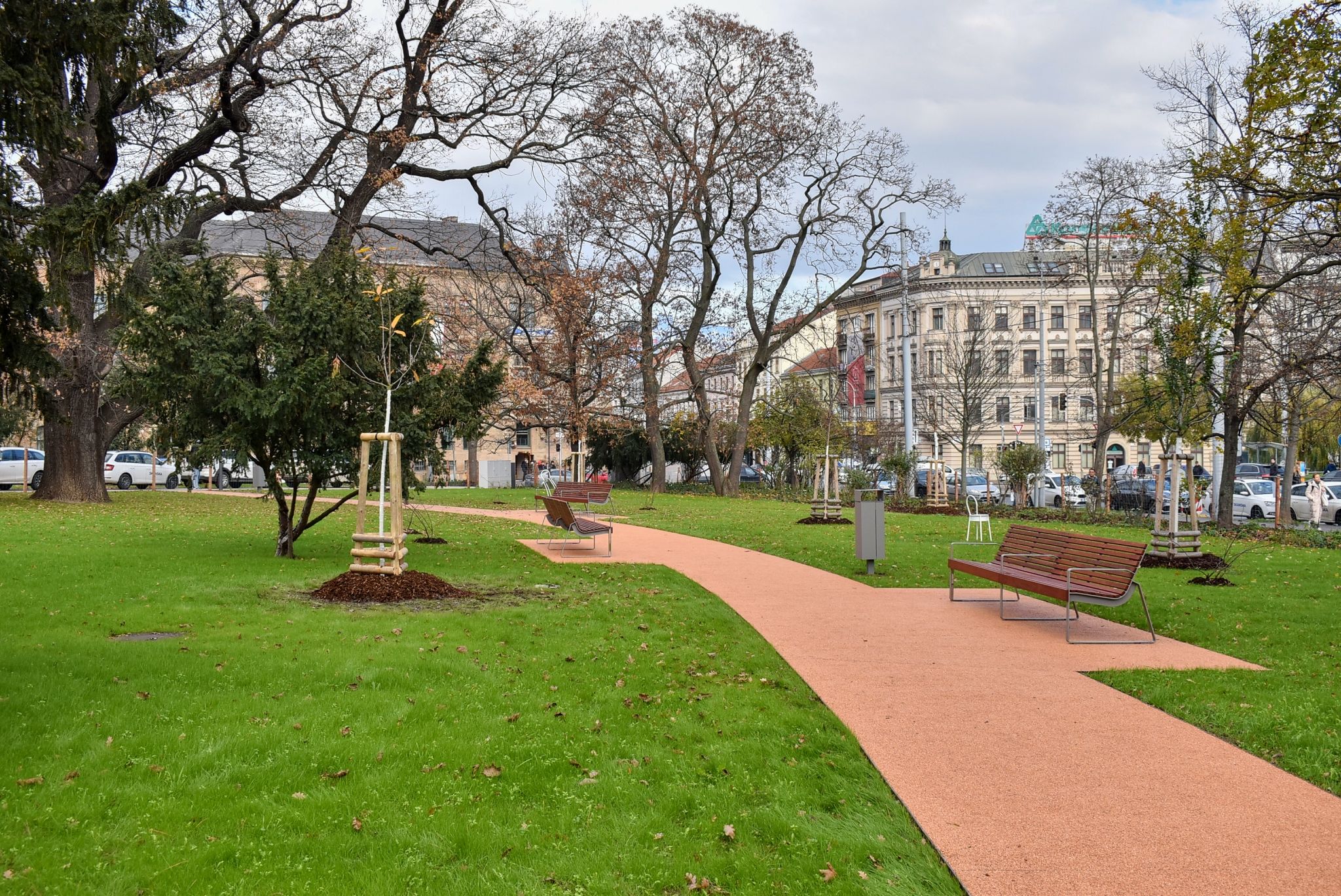 The total investment in the park amounts to CZK 132.5 million. Photo credit: Brno-střed.

Brno, Nov 22 (BD) – After eight months of reconstruction work, the park on Moravské náměstí opened to the public again on Monday, 21 November.

The original concrete fountain, asphalt paths, and lawns have been completely replaced by a new layout conceived by Consequence forma architects, who won an open architectural competition for the redesign of the park. The central part consists of a variable water feature, which can become a water surface, fog jets, or classic fountains, and can also be used for theatre or music performances.

“After almost 50 years, the park in Moravské náměstí has been given a new look that is unique not only in its architectural design, but also in the use of new blue-green infrastructure technologies such as regularly watered flower beds, improving the root systems of existing trees, or the use of rainwater,” said the Mayor of Brno-střed, Vojtěch Mencl (ODS). Another new feature of the park is a café with public toilets, which is still under construction and will be in operation at the beginning of next year.

The often-used pedestrian route between Joštová and Lidická has been preserved and paved, and a new circular walkway has been created inside the park, especially for parents with children and prams. The park now also includes dozens of playground elements for children and a sandpit. Richard Loskot, the designer, created a total of 26 play elements based on the chair and table pattern.

To allow the perennial beds and lawns to take hold properly, protective temporary fences have been placed in the park. Park visitors are asked to respect these temporary restrictions and not enter the freshly planted areas. The fences will protect the plant beds until approximately the end of May, when they will be replaced with low, permanent walls.

“A large number of original trees have been preserved, and their root systems were sensitively treated before the work began so that they would survive the demanding reconstruction around them,” said Brno Mayor Markéta Vaňková (ODS). “In addition, 77 new trees have now been planted in the park, including maples, oaks, sycamores, and dogwoods; 68 shrubs; and 36,000 perennial seedlings. And that’s not all – in spring, the park will be enlivened by daffodils, tulips, and lilies, of which 67,000 have been planted. This park of citywide importance really deserved an extensive reconstruction, and the city’s investment of CZK 95.5 million was obviously well used here.”

The total investment in the park amounts to CZK 132.5 million. The City of Brno contributed CZK 95.5 million, and the Brno-střed district CZK 37 million. In addition, the city district covered the costs of the project documentation and the treatment of the root systems of the trees before the reconstruction began. Preparatory and project work cost approximately CZK 10 million in total.

According to František Chlup, Area manager for Skanksa, the construction contractor, the work was carried out with environmental concerns in mind, using only a minimal amount of natural aggregates, and instead using mainly recycled material from the square itself and other buildings.