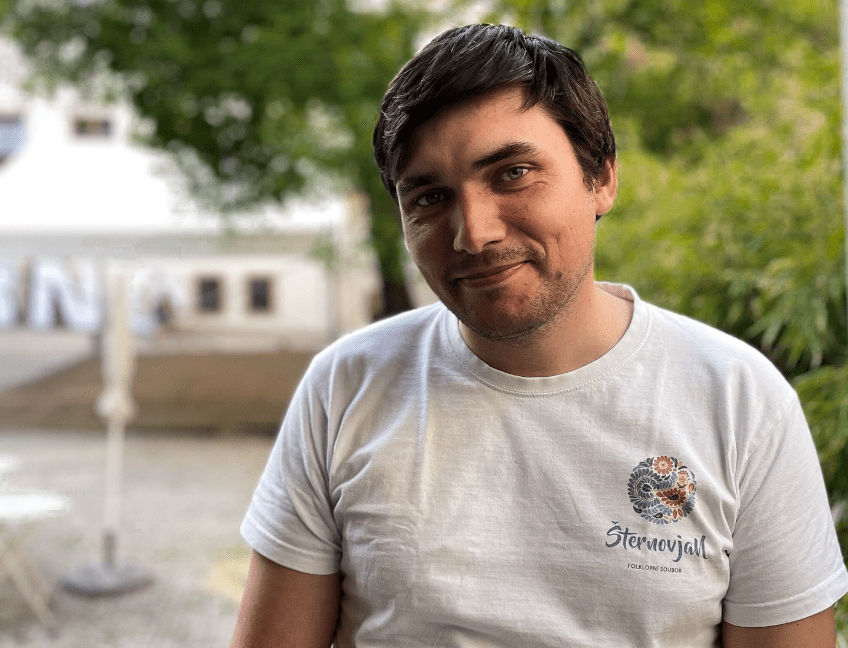 Last week, Brno Daily reported on the folklore association Brnensko Tanci A Zpiva, which fights to restore, maintain and develop the cultural and spiritual traditions of the ethnographic region of Brno. We spoke to Jan Blazek, a member of this association, who has dedicated his professional and personal life to the promotion of Czech culture. Through his story, Jan Blazek explains his vision of Czech cultural identity and the passion that drives him to protect it. Photo credit: Lou Kaemo / Brno Daily

On a hot June day, Jan Blazek arrived at our meeting point. Over a fresh juice, in the charming courtyard of the old town hall where the association organises many of its events, Jan tells us about his experience of associative and cultural life.

Can you introduce yourself and your work?

My name is Jan Blažek. I come from a small village west of Brno. I studied for six semesters a combined doctoral degree in Ethnology at Masaryk University. In my bachelor’s thesis, I evaluated almost every document about folk pipers from the Brno region. In my master’s thesis, I gathered and analysed documents about the tradition of little queens in the Brno region, and the early days of their existence as part of the folklore movement.

I have been employed at the National Institute of Folk Culture since 2017. I participated in the project Folk Songs and Dances of Czech Lands – the Digital System for Accessibility and Rescue. I work in research and development. I am responsible for the list of Intangible Elements of Traditional Folk Culture of the Czech Republic, and the Czech elements on the Representative List of Intangible Cultural Heritage of Humanity.

I have to deal with nine elements registered in the list: Carnivals, Falconry, Hunting, Puppetry, Running for Barchan, Bagpipes, Willing Theatre, and Brewing Coopers Technology, as well as the agenda associated with the 2003 Convention for the safeguarding of Intangible Cultural Heritage. At present, I focus on annual customs in the territory where I have been living since I was a child, that is, the wider surroundings of Brno.

My position is not strict. It doesn’t have any name. I am trying to do anything I am able to do. Let’s say that I help with the organisation of the parade and the event we had on 1 June for instance, for Pentecost. I also help with workshops and seminars we have in spring and autumn in Brno-Lisen. And I am trying to help with things like calendars, because we have photographers here during the event and they take photos of the groups who are on the podium. So, after or before they dance and sing the photographer takes photos and we use them for the calendar for next year. These are the three main purposes of the association.

Are there any specific dances or songs from Brno?

Not specific, if we were to talk about annual customs which are every year. There are many celebrations connected with Christianity, with Easter, with Christmas. But of course, there are others less known or less spread around the world and those are, I would say, Pentecost for instance. Some say that it is connected to Pagan origin, not to Christianity. One of these customs during Pentecost is the Ride of Kings. Young men or boys wear their traditional costumes, ride horses and go to the houses in the village, where they collect rewards like money or food. It is a very old custom. You can see in this picture a man in white, we call him the King. He was elected, because he was the youngest or in another village he was the most skilled in riding horses. It is interesting because it was not only in Moravia but across central Europe in general. They had their King and also their Queen. Nowadays it is quite forgotten, but in the past he was the King for the whole year.

This is one of the quite unforgotten customs. There are also carnivals, and a three-day procession before Ash Wednesday. This is from eastern Bohemia, and of course there are regions where it is different. These customs are the most popular in the Czech Republic.

Is dancing and singing a family thing for you?

I sing and dance too, that’s right. But I would say half and half. My parents are from the same village. They have always danced there. My grandmother made her own folk costumes. This is not only around Brno but in most villages or places in the Czech Republic. People stopped wearing them and there was a time when they were just given to museums or sold. My grandma’s costume wasn’t from that area. It was inspired by other traditions than just the local tradition. People made their costumes when it was permitted during communism when Christianity was not accepted by the government. It wasn’t as easy as now, but my parents also borrowed some boys’ costumes for us for some events.

It also helped that we lived for 15 years in southern Moravia. It was a really important period of my life because I was asked whether I wanted to go with my parents to some traditional events where we had to wear costumes. It was only from Friday to Sunday and I said ok. For the first week I had this feeling that it was not for me! Because it was something new and I saw that many others had been doing it for years. I felt like I was not skilled in every dance and song. But it took me half a year until I wanted more and more. And now, here I am after 12 years, organising folklore events, and it is above all my work.

Would you say that traditions are now more for tourists, or do they still matter for people as cultural identity?

It is complicated to say. It depends on each person and the purpose behind their work. There are of course many people who know that it is good for business and thanks to tourism they can earn more money. But I would say that state institutions or volunteers are promoting the culture to maintain what the previous generations did. Those I think are doing it just for the legacy, not to let it die you know. People are different, so it really depends on them.

Do you participate in international cultural meetings with other countries?

Maybe I could say yes, because I have a colleague interested in folklore movements around the world and folklore groups. She organises two-year courses where people can learn how to lead a group of people, an association. And also she is interested in foreign festivals and other folklore groups from abroad and from the Czech Republic. As far as I am concerned, I am more interested in contributing to cultural heritage. I meet people from abroad working on ethnology and anthropology, but it is not like I meet the leaders of folklore associations from other countries. But I went a few times to Slovakia, Bosnia and Herzegovina, or England for folklore events. Of course I am interested in foreign culture and sometimes I have the opportunity to speak with people and exchange stories about that. Unfortunately, it is not as often as I would like.

Is Czech culture well promoted by the Government of the Czech Republic?

Tomorrow, I have to go to the Ministry of Culture! Now when I am working for culture, I know what’s behind it. I see that there is money. People are trying to help to promote folklore traditions, but of course it is different if it is your work or your hobby. If it is your work for 8 hours a day, it means that you have things you must do, goals you must achieve, which is not the case when it is in your free time.

I think that it is also about how people working to promote culture are able to ask for money from the European Union, from the South Moravian region, from the city… They are able to get some funding because a lot of people give their own money to culture and those are the best ones. This is something which is not common with this modern world.

What message do you want to send to our readers?

I would only say that there are many folk customs or regions that are hidden from the public, customs and regions that are not so well-known. However, the local communities are proud of it and motivated to bring it to their children and grandchildren. It is very interesting and I am still surprised by many things. There are traditions or customs which are on the Internet every day, in the media so people know about it. And Czech people participate in these in high numbers, but there are some others which are not known by the public and not written about anywhere. I think that, as an ethnologist, I would monitor this and try to help those who have questions the best I can. For instance, how to get this book, how to find this material, this photo… I am trying to do my best but I assume that it’s difficult.