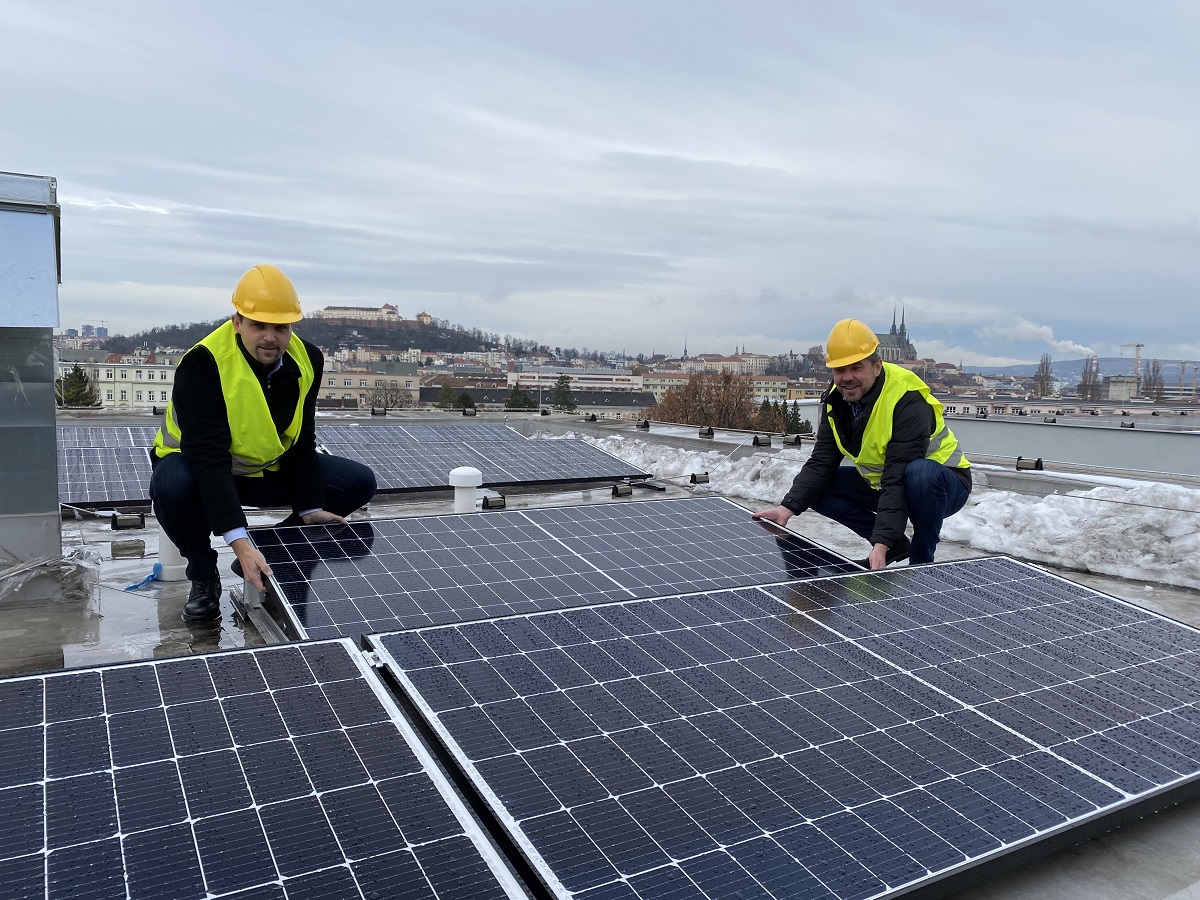 SAKO Brno has installed the first 88 solar panels on the roofs of the residential complexes at Vojtova 7 and Vojtova 9, with the nursing home at Horova 77 following soon. Over the next five years, the city intends to install solar panels on 500 roofs in this way, with a total capacity of 40 MWp, the second highest of any solar power plant in the country. Credit: Sako.

Brno, Dec 3 (BD) – Through Brno’s solar power plant scheme, the City promises an annual electricity production of around 43 GWh, which would mean annual emissions savings of at least 36,000 tons of CO2.

“Following the recent conclusion of the memorandum on the use of hydrogen in the City of Brno, this is another important step towards a commitment to reduce CO2 emissions by at least 40% by 2030,” said Petr Hladík (KDU-CSL), First Deputy Mayor of Brno. “The initial project of the Brno photovoltaic power plant will be completed by SAKO Brno by the end of the year. Each of the roofs of the pilot project at Vojtova 7 and 9 will be able to generate electricity, which will be used to supply the common consumption of buildings, such as lighting of common areas, air conditioning or the operation of elevators. Immediately afterwards, panels will be installed on the roof of the nursing home at Horova 77. Over the next year, we will install a further total capacity of 4 MWp.”

“The first installations will be primarily intended for on-site consumption,” said Filip Leder, Chairman of the Board of SAKO Brno, which is in charge of the municipal photovoltaic power plant project. “In the next stage, we will want to make full use of the maximum roof area. We want to use the surpluses generated in our system, store them in battery storages, or accumulate energy in hot water or hydrogen and delay its consumption for a later period. That is why we are eagerly awaiting the acceleration of the legislative process that will make the rules for community energy more transparent.”

The municipal solar power plant project will be one of the main tools for reducing CO2 emissions in the city of Brno. Further development of community photovoltaics will help make more rational use of natural resources, diversify the energy mix, stabilize the distribution system and reduce its load.

“So far, we have contacted 18 of the 29 city districts of Brno, with whom we are looking for suitable locations. Out of 230 roofs assessed, we now have 65 shortlisted for implementation in 2022. These include homes for the elderly on Vychodilová and Věstonicka, and the roofs of Sirotkova, Merhautova and J. Babáka primary schools,” said Leder. He added that there are now 25 kindergartens, 20 primary schools and 5 office buildings in view. The Brno plan is specific in that it plans to connect production on many buildings. Overall, it will be the second largest solar power plant in the country in terms of planned output.

https://brnodaily.com/2021/12/03/brno/brnos-solar-green-roofs-project-sees-first-installations/https://brnodaily.com/wp-content/uploads/2021/12/P.-Hladik-a-F.-Leder-instaluji-jeden-z-prvnich-panelu-1024x768.jpeghttps://brnodaily.com/wp-content/uploads/2021/12/P.-Hladik-a-F.-Leder-instaluji-jeden-z-prvnich-panelu-150x113.jpeg2021-12-03T09:11:49+01:00Juris DukaBrnoNewsBrno,NewsSAKO Brno has installed the first 88 solar panels on the roofs of the residential complexes at Vojtova 7 and Vojtova 9, with the nursing home at Horova 77 following soon. Over the next five years, the city intends to install solar panels on 500 roofs in this way,...Juris DukaJuris Dukadukajuris@gmail.comAuthorBrno Daily

« We Are The Night, Part III: Arleta
Time Out Magazine Rates Brno As Second Best City To Visit In Europe »