Transport on Veveří and Benešova Restricted; Bohunická Construction Is Complete 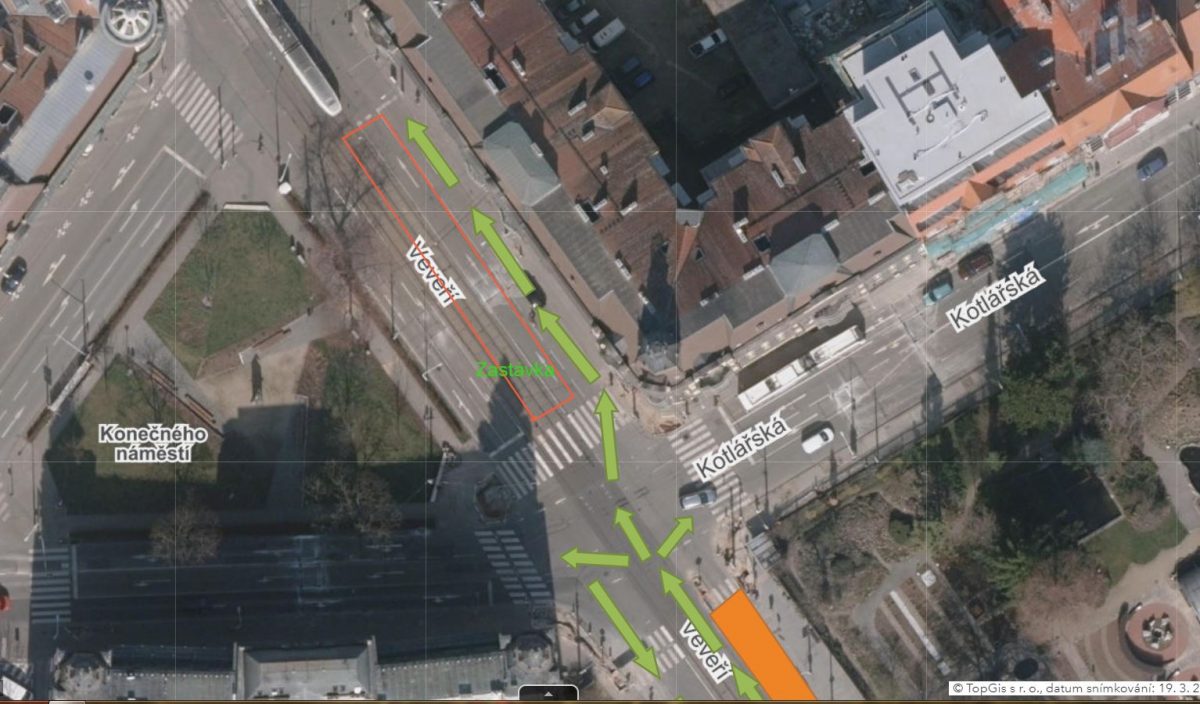 Transport restrictions will apply on Veveří until December 18th and on Benešova from November 21st-22nd. Meanwhile, Bohunická has reopened after extensive works. After more than a year of reconstruction work on the water supply and sewerage system, cars can now pass freely and public transport has resumed. Image: Map of the situation behind the intersection Veveří x Kotlářská x Konečné náměstí. Credit: Kopemezabrno.cz (“We Dig For Brno”).

Brno, Nov 20 (BD) – Traffic in Brno will be affected by construction work around the city. Since yesterday, restrictions on traffic have been applied on Veveří due to modifications to Konečného náměstí tram stop. Benešova will be part-closed in the Novobranská–Divadelní section this weekend due to repairs to the tram line. In other construction news, as of Wednesday, car traffic can again pass through Bohunická, as the reconstruction of the sewerage and water supply is now complete.

Restrictions on Veveří to last until December 18th

Konečného náměstí tram stop is being extended and made wheelchair accessible in both directions, in preparation for the rerouting of tram 1 along Veveří when it is closed. Work began at the stop yesterday and will continue until December 10th.

At first, work is being carried out on the tram island in the direction towards Bystrc. The normal car traffic lane is closed, and traffic will flow through the tram tracks instead. Trams will use another temporary stop on the other side of the main junction.

Between December 11th and 18th, work will continue on the tram island in the direction of the centre, and cars will again be diverted to pass via the tram tracks. Additionally, two-way traffic will run on Jiráskova, though it will not be possible to exit onto Veveří at the crossroads on Konečného náměstí.

Transportation by tram will continue, with temporary stops.

Restrictions on Benešova from November 21st to 22nd

Public transport passengers and drivers should anticipate restrictions on Benešova this weekend as repair works on the tram line and replacement of switches will narrow the road. Stopping will not be allowed in the vicinity of the repairs.

Trams will be affected by the works. No trams will use this street between 8am and 8:45pm on Saturday and 8am and 5pm on Sunday. Trams lines 1, 2, 4 and 9 will be diverted during these times.

Tram 1 in the section Hlavní nádraží – Moravské náměstí will be diverted in both directions via náměstí Svobody.

Tram 2 will be divided into two sections, from Stará osada to Malinovského náměstí and from Hlavní nádraží to Modřice.

Tram 4 in the section Malinovského náměstí – Česká will be diverted in both directions along Rooseveltova.

Tram 9 in the section Moravské náměstí – Hlavní nádraží will be diverted via náměstí Svobody.

Bus 67 will run between Hlavní nádraží and Malinovského náměstí as normal.

Since reconstruction work began on Bohunická last September, workers have rebuilt 709 metres of the sewerage system, which was originally installed in 1934. A length of 677 metres of the water supply, in operation since 1928, was also reconstructed. During the reconstruction process, public lighting cables were replaced, along with nine lamp posts. The work carried out by Brno Waterworks and Sewerage was coordinated with repairs to the gas network. All road and sidewalk surfaces will soon be restored to allow car traffic and public transport to resume.

https://brnodaily.com/2020/11/20/brno/transport-on-veveri-and-benesova-restricted-bohunicka-construction-is-complete/https://brnodaily.com/wp-content/uploads/2020/11/Konecneho-namesti-credit-we-dig-for-brno-1024x601.jpghttps://brnodaily.com/wp-content/uploads/2020/11/Konecneho-namesti-credit-we-dig-for-brno-150x88.jpg2020-11-20T15:31:33+01:00Kim BingelBrnoNewsBrno,Construction,Traffic,TransportTransport restrictions will apply on Veveří until December 18th and on Benešova from November 21st-22nd. Meanwhile, Bohunická has reopened after extensive works. After more than a year of reconstruction work on the water supply and sewerage system, cars can now pass freely and public transport has resumed. Image: Map of...Kim BingelKim Bingelkjbingel@gmail.comAuthorSouth African in Brno. Independent international traveller. Enjoys nature and a sustainable lifestyle.Brno Daily

South African in Brno. Independent international traveller. Enjoys nature and a sustainable lifestyle.
View all posts by Kim Bingel →
« State Of Emergency Extended to December 12th
Brno from B to Ž: A Tough-Love Guide to the City’s 48 Neighborhoods, Part 5 – Černá Pole »