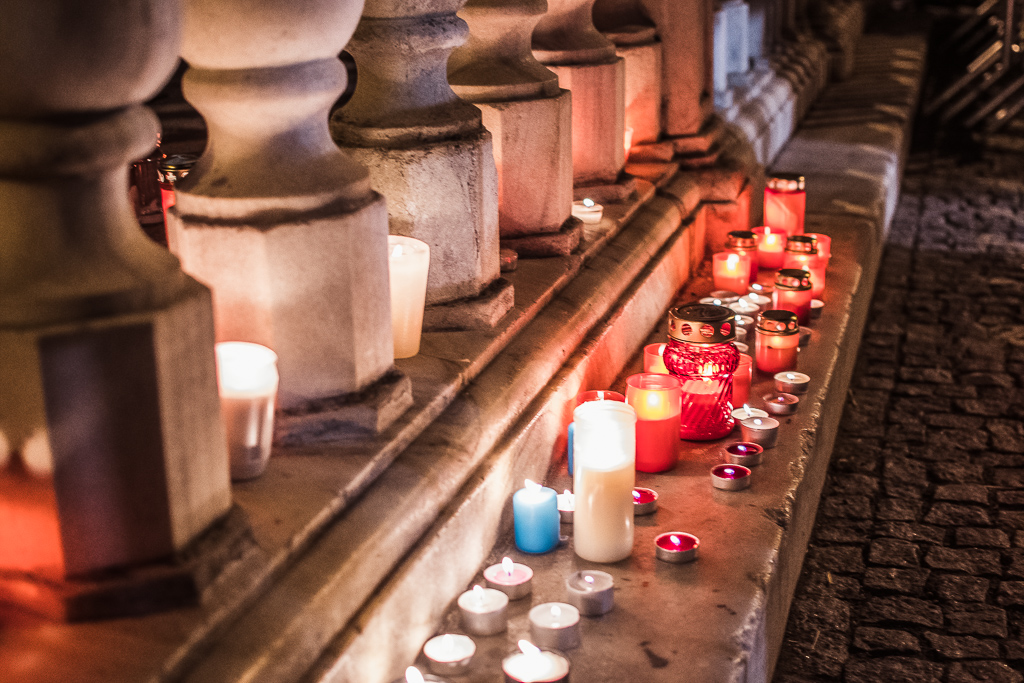 Masaryk University has organized events to mark two anniversaries on November 17th. A morning program will commemorate executions and arrests by the Nazis during World War II, and an online program in the afternoon will remember the events of the 1989 revolution. Candles will light up windows in memory of the events of November 17th in 1939 and 1989. Photo: Náměstí Svobody. Credit: Casadei Graphics.

Brno, Nov 16 (BD) – On Tuesday, November 17th, the National Day of the Czech Republic, Masaryk University (MU) will host two commemorative events, in accordance with the current anti-epidemic measures. The morning program will pay tribute to victims of the Nazi occupation in 1939, and the afternoon will be dedicated to the memory of the 1989 revolution. Candles will be lit in windows in the early evening.

An act of reverence will be held in the morning on the site of the dormitories on Kounicova where prisoners were executed by the Nazis during the occupation of Brno in the Second World War. An online program will be held in the afternoon to remember the events of the Velvet Revolution.

The morning commemoration service will be attended by academic staff, who will lay a wreath at the memorial in respect to the victims. A bouquet will also be placed at the Monument of the Three Resistances on Rooseveltova.

At 3pm on Tuesday, Vice-Rector Jiri Hanus and historian Jiri Suk, a leading expert in recent Czech and Czechoslovak history, will hold a discussion entitled “The Velvet Revolution and the Power of the Powerless’’, on the topic of Vaclav Havel and the 1989 revolution.

The film ‘‘Brno November’’ is part of the accompanying program and will be broadcast on CT2 at 2:25pm. The film presents a fresh and authentic view of the events of the revolution, combined with official news, street polls and contemporary reports.

The traditional lantern procession has been replaced this year with a call for the symbolic lighting of lanterns in the windows of homes. MU rector Martin Bares will deliver a video greeting.

The Rector’s Office of Masaryk University, along with other significant buildings in Brno, will be illuminated with the colours of the Czech tricolor on November 17th at 5:11pm as part of the celebrations.

https://brnodaily.com/2020/11/16/events-in-brno/masaryk-university-to-hold-two-commemorative-events-on-november-17th/https://brnodaily.com/wp-content/uploads/2019/02/Namesti-Svobody-Brno-November-17-2018-8-1024x683.jpghttps://brnodaily.com/wp-content/uploads/2019/02/Namesti-Svobody-Brno-November-17-2018-8-150x100.jpg2020-11-16T11:45:06+01:00Kim BingelBrnoEvents in BrnoBrno,History,News,RevolutionMasaryk University has organized events to mark two anniversaries on November 17th. A morning program will commemorate executions and arrests by the Nazis during World War II, and an online program in the afternoon will remember the events of the 1989 revolution. Candles will light up windows in memory...Kim BingelKim Bingelkjbingel@gmail.comAuthorSouth African in Brno. Independent international traveller. Enjoys nature and a sustainable lifestyle.Brno Daily