Mendlovo Namesti To Undergo Cosmetic Makeover, But Much-Needed Redesign of Public Transport Hub Will Be Postponed 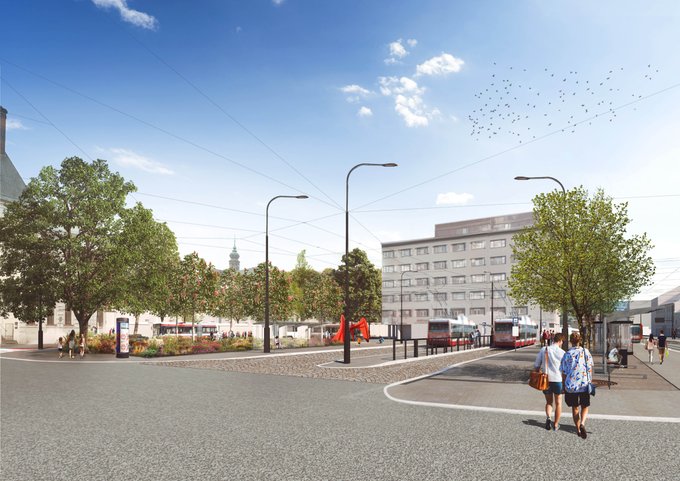 After years of discussion, the City of Brno is due to progress with the first phase of regeneration work on Mendlovo namesti, to coincide with other essential maintenance work. However, the decision to focus on cosmetic changes and postpone more fundamental (and expensive) changes to the square’s layout has sparked criticism from those who want to see the square’s traffic problems resolved. Title visualization: MMB.

Brno, May 16 (BD) – Plans for a complete redesign of Brno’s Mendlovo namesti have been under discussion for years, and a public architectural competition was held in 2018 to choose a main design for the new-look square, including a complete reorganisation of the traffic system. However, the total cost of the work would run into billions of crowns, so the City of Brno has proposed a first phase of improvement to begin in April 2021, coinciding with the replacement of steam pipelines in the area with hot water pipes, carried out by Teplarny Brno.

A greener and more pleasant Mendlák

At an estimated cost of CZK 40 million, the first phase plans involve a range of changes to improve the user experience of the square. According to David Zajíček, head of the public spaces department at the Brno City Architect’s Office, “The main idea is to divide the space in Mendlovo namesti into smaller, more attractive, better-arranged sections. We will achieve this mainly by planting new trees and perennial flower beds, expanding areas for pedestrians and market stalls, removing barriers, reducing the number of traction masts and replacing street furniture.” He added that the plan will use trees to divide the tram stops, roads, and trolleybus terminal.

According to Filip Chvátal (KDU-CSL), eight trees will provide shade for passengers waiting for Tram #1 on its way out of the centre, and nine more for passengers going the other way into the city. There will be many more trees and other plants located in the tram loop, and perennial flower beds in several locations around the square. The work should be completed by July 20th, 2020, the 200th anniversary of Gregor Mendel’s birth, which will be commemorated with a new statue of Brno’s famous pioneering geneticist.

What about the transport?

The first phase plans do not involve any changes to the existing traffic layout of the square or the public transport system, according to Hana Tomaštíková, a spokeswoman for the Brno Transport Company (DPMB): “These are minor modifications that should not have a significant impact on the organization of transport on Mendlovo namesti.”

This has caused consternation from those who argue that the square’s chaotic transport situation is in fact its biggest issue and should be prioritised in any work done, which was the purpose of the architectural contest. Opposition came not only from the ANO group on the City Assembly, but also from the Brno-střed district. “It’s a waste of money. We, as the city district, do not agree with it,” said Petr Bořecký (ANO), representative for planning and development of the Brno-střed city district, speaking at Tuesday’s City Council meeting. “The real problem with the square is the chaotic traffic, and these plans do nothing about that, nor water and sewage networks, which are also in a state of disrepair. Why not make changes by 2022 on the basis of the winning competition entry?”

However, according to Chvátal, this work would involve a complete reconstruction of the intersection of Václavská and Křížova, at huge cost and with major disruption: “It would be an investment in the order of billions due to necessary repairs to the sewer system and water supply. It will not be affected during the current modifications.” At Tuesday’s meeting, defenders of the plan argued that the square’s shabby appearance called for immediate action, with Deputy Mayor Petr Hladík (KDU-CSL) describing it as “the second biggest disgrace in Brno, after the main railway station.”

This point was echoed in public comments by Brno Mayor Marketa Vankova: “Before the complete reconstruction takes place, we want to get the most out of the current situation and create a more pleasant area for thousands of people who pass through here every day.”

Although the plans passed a vote at the meeting on Tuesday, Hladík promised that the City Council would consult with the city district and the competition winners about the planned works.

https://brnodaily.com/2020/05/16/brno/mendlovo-namesti-to-undergo-cosmetic-makeover-but-much-needed-redesign-of-public-transport-hub-will-be-postponed/https://brnodaily.com/wp-content/uploads/2020/05/mendlovo-namesti.jpghttps://brnodaily.com/wp-content/uploads/2020/05/mendlovo-namesti-150x106.jpg2020-05-22T08:49:19+02:00Jack StephensBrnoNewsArchitecture,Brno,News,Politics,Urban PlansAfter years of discussion, the City of Brno is due to progress with the first phase of regeneration work on Mendlovo namesti, to coincide with other essential maintenance work. However, the decision to focus on cosmetic changes and postpone more fundamental (and expensive) changes to the square’s layout has...Jack Stephens jack.stephens50@gmail.comAuthorA writer and English teacher originally from London who has lived in Brno since 2011, interested in politics, low culture, and all things strange and/or Czech.Brno Daily

A writer and English teacher originally from London who has lived in Brno since 2011, interested in politics, low culture, and all things strange and/or Czech.
View all posts by Jack Stephens →
« Events For Up to 300 People To Be Allowed From May 25th, But Pubs Must Close at 11pm
Br(u)no: The Great Awakening »