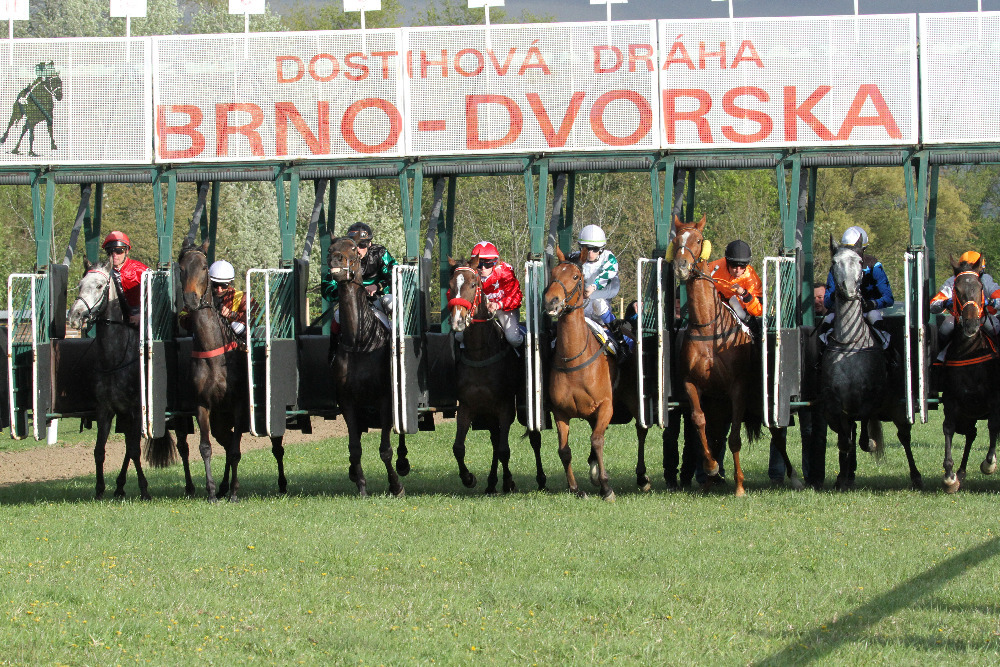 The final race day of the year at Brno-Dvorska is this Saturday. The first of eight races is at 2 p.m. There is plenty of parking or take Bus 48 to the Vlčková stop. Adult admission is 100 Kč and kids are 30 Kč. Photo credit: Brno-Dvorska.

KP Brno pulled away from hosts Loko Trutnov last Sunday to win their opening game in the Renomia ŽBL and, on Monday, the team announced that they have added another player: Dutch representative Chatilla van Grinsven.

Tonight, KP Brno plays at Sokol Nilfisk H. Králové in a rematch of the 2018-19 third- and fourth-place series, which Hradec Králové won.

van Grinsven is a 28-year-old, 191-cm post player. She comes, most recently, from Universitario Ferrol in the Spanish League, where she averaged of 8.2 rebounds and 11.6 points per game.

She has a lot of international experience, having played in the highest leagues in Turkey, Italy and France. With Bourges in 2014, she played in the Final Four of the Euroleague (where she faced off against USK Praha). She is a member of the Dutch National team.

van Grisven is expected to make her KP Brno debut in the team’s first home game this Saturday against Slavia. The games starts at 3:30 p.m.

Žabiny Brno, who finished second last season, started this season with games against last year’s third-place team and the defending champion. It did not go well.

In the first game of the season, on Saturday, they lost to Sokol Nilfisk Hradec Králové, 69-75. On Tuesday, they fell to league powerhouse ZVVZ USK Praha on Tuesday, 70-85.

The team will continue its homestand when it hosts three games in the EWBL: on Friday they play Nika Syktyvkar at 6 p.m.; on Saturday they play Dynamo Moskva at 5 p.m.; and on Sunday they play Piešťanské Čajky at 2 p.m.

Basket Brno will begin its Kooperativa NBL season this Saturday when it hosts Sluneta Ústí nad Labem at 7 p.m.

In a ho-hum game that had trouble generating excitement last Saturday, two of the FC Zbrojovka players came through with goals so that the home team could beat FC Hradec Králové, 2-1.

In the 35th minute, Ondřej Vaněk finished off a nice pass from Lukáš Magera to put the home team on the board. After the visitors converted a penalty shot, Vaněk found Michal Šmíd with a corner kick in the 88th minute.

Vaněk and Šmíd both were playing in only their third game with Zbrojovka.

The victory moved Zbrojovka (4-4-2, 16 points) into sixth place in the Fortunta:Narodni Liga standings. Hradec Králové (5-3-2, 18) is two ticks up in fourth place.

Zbrojovka travels to MFK Chrudim for a 10:15 a.m. game on Saturday.

There is only one home game scheduled for October: Varnsdorf on Friday, Oct. 18, at 7 p.m.

SK Líšeň went to league-leader FK Pardubice and got shut out, 2-0, last Saturday. The second goal, however, was put on the board in the 90th minute, after Líšeň had played for almost 30 minutes down a many because of a red card.

FC Zbrojovka had an early lead and tied the game in the middle of the second half, but first-league Jablonec scored late to win on its own field, 3-2, on Tuesday and eliminate Zbrojovka in the third round of the MOL Cup.

In Moravia, also on Tuesday, Líšeň was eliminated in its third-round MOL Cup match at SK Sigma Olomouc, another first-league club. The final score was 4-2.

Lokomotiva In Sixth, Last-Place Liberec Next

Lokomotiva Brno-Horní Heršpice went to Prague to face undefeated SK Slavia Praha last Saturday and lost, 7-0. It was the team’s fourth loss in a row after opening the season in the top women’s league with two victories.

The good news is that Lokomotiva is, for now, done with playing against the top teams, having also lost at home last week, 0-5, against second-place AC Sparta Praha.

The next opponent is last-place FC Slovan Liberec; the game is in Horní Heršpice on Oct. 12 at 11 a.m.

HC Kometa was outshot 43-26 in its game at HC Energie Karlovy Vary on Tuesday night, but they were still able to score four goals in the third period and earn three points in the standings with a 3-4 victory.

It was the third victory in a row for the Brno hockey team.

Kometa is now sixth in the standings with 12 points. Four teams have 13 points (Třinec, Mladá Boleslav, Olomouc and Vítkovice). Liberec leads the league with 16 points.

Kometa will be on the road at Mountfield HK on Friday. They return to DRFG Arena on Sunday to host PSG Berani Zlín, which has yet to score any points in the standings through six games, at 5 p.m.

The Brno Cricket Club was 6-3 in 10 matches (one was abandoned) and finished third in the Czech Cricket Union – CMKS Pro40 Division 1.

https://brnodaily.com/2019/10/02/sport/brno-sports-weekly-report-kp-brno-wins-opener-adds-dutch-representative/https://brnodaily.com/wp-content/uploads/2019/10/BrnoDvorsk021019.jpghttps://brnodaily.com/wp-content/uploads/2019/10/BrnoDvorsk021019-150x100.jpg2019-10-02T09:35:55+02:00Bruno ZalubilSportBasketball,Brno,Czech Republic,Kometa,News,SportThe final race day of the year at Brno-Dvorska is this Saturday. The first of eight races is at 2 p.m. There is plenty of parking or take Bus 48 to the Vlčková stop. Adult admission is 100 Kč and kids are 30 Kč. Photo credit: Brno-Dvorska. Brno,...Bruno ZalubilBruno Zalubilbzalubil@hotmail.comAuthorA connoisseur of the unpredictable and unscripted drama of sports.Brno Daily

A connoisseur of the unpredictable and unscripted drama of sports.
View all posts by Bruno Zalubil →
« New Working Group To Promote International Study in Brno
Karel Gott, the Most Popular Czech Singer, Dies at the Age of 80 »