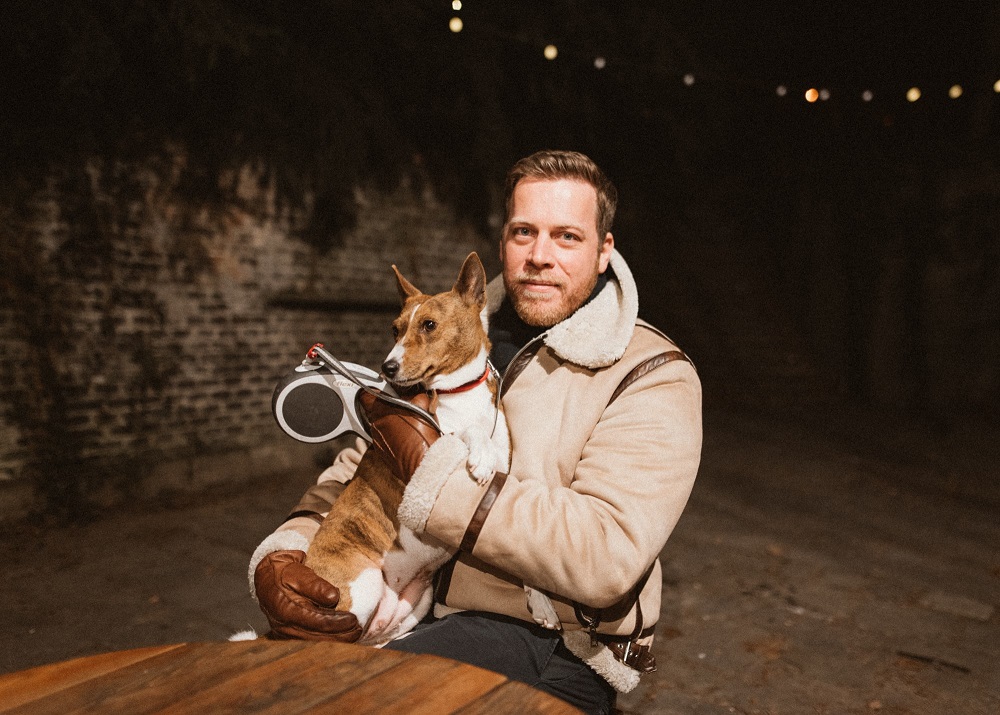 On Sunday 24 February, BEST Divadlo’s new show “Wenceslas Square” opened at Kabinet Muz. We sat down for a coffee with the lead actor from the show, Nicolas Damoiseau, to find out more about the show and what audiences can expect…Photo credit: Dina Khusainova ph.

BD: So Nicolas, could you tell us something about yourself, where you’re from, how long you’ve been in Brno?

ND: Yeah sure, I’m from France, from Troyes, which is a city in the Champagne region. It’s a small city, about the size of Olomouc. I grew up there until I was 18, and then I moved to Paris, and stayed there for 15 years. And now I’m 36. I arrived in Brno three years ago, and it has been great for me, it’s a city I really enjoy living in, and I could see myself here in the future for the long-term. Three years is already quite a long time but I certainly don’t see myself leaving in the near future.

BD: And what about your acting background?

ND: This is my second play that I will do. We have the premiere on Sunday. I also play in a French-speaking group, here in Brno. It’s with people who are not French but speak French. And it’s very interesting because it’s a really hilarious comedy that we play, a TV show adaptation, and it’s really brilliant. In that group it’s more like there are ten of us on stage and each of us has a small part. Here it will be the first time that I perform in English, and the first time that I’m playing in a lead role. So I am very excited about it.

BD: Ok, moving on to the play itself, what can audiences expect when they come to see Wenceslas Square?

ND: I would say it’s quite… It’s a comedy, but it’s a comedy about a serious matter, about the Prague Spring, about how theatre really flourished during the Prague Spring, and how the Russians censored it and the occupation just killed all this creativity and replaced it with fear, and censorship. So it is a comedy and we have quite funny actors but it’s on a topic which is quite heavy and which will hopefully speak to the local audience as well as the because it’s a story that we all know, the story of the Czech Republic. It’s no secret.

BD: It’s interesting that someone can make a comedy out of this material…

ND: Yeah, I think American playwrights have quite a skill for making funny things about dramatic events. It’s one of those things that happened long ago enough that we can laugh about it. But it’s not a parody, it’s really about what happened, and about the misadventure of someone who came here for the first time when it was glorious. And he comes back five years later thinking it will be the same. And he’s very sad to discover that all the creativity, everything that made Czech theatre so beautiful, has kind of disappeared.

BD: Why did you choose this play specifically?

ND: We actually have a system in BEST Divadlo, where we do public readings. What happens is that the actors come and read the script with the book in hand, and try to act as much as they can but while reading the script, in front of an audience. And after the show, we ask the audience what they thought about it, and if they liked it we try to make it into a play. That’s what happened with Wenceslas Square. There was a public reading I think last summer, and people loved it, so we decided to make it into a play, and we put it on the program for this season. That’s how we choose our plays, we just read things to people and whatever they like, we make it into a play.

BD: That sounds like a good way of gauging public opinion?

ND: Exactly! There are so many plays to choose from. BEST Divadlo is mostly for American plays, and the theatre culture in America is so rich that I think it’s a great idea to engage the public and to try to make an almost democratic choice of shows.

BD: Without spoilers, what would you say are the main themes and ideas within the play? What’s the message?

ND: Without spoiling, I would say that the message is very historical. It’s about two perceptions about how things can be diluted in time, about the comparison between what was, and what is.

ND: So the role is Vince, he’s an American professor. He’s the guy who wrote the book about Czech theatre, and comes back five years later to write a final chapter, a little update on what happened during these five years. So he’s coming with this idea that it will be just like it was, like “I enjoyed it so much last time, it’s gonna be ok.” We have all been in this situation, where we’ve been somewhere, and a few years later we come back and it’s not the same. Here it’s a bit more of an extreme situation, but I think we’ve all had this feeling. And he’s someone who is very American, he talks a lot, he talks very loud, he’s very extrovert, he has this kind of charming craziness in him, so it’s something that I really enjoyed playing. He’s a very creative and very expressive person, which is not specifically my type… so it’s always nice to play someone that you are not, I prefer it.

BD: Could you tell us a bit more about the concept of BEST Divadlo?

ND: BEST Divadlo was formed to present to the Czech Republic plays about American culture, and British and Canadian culture, so we choose plays from these English-speaking countries, and we try to present them to the audience. So it was started by Gene [Terruso], who is an American guy, a very professional actor who has been in movies, on Broadway, who has a real background in theatre. He came here and discovered that there was no English-speaking theatre back then.

“Now we can see Czech plays with English subtitles, which is great, but American plays are something that does not exist in the Czech Republic, at least not in Brno, so that is our mission and we are trying to expand our activities as much as we can.”

Now there are two, but back then it did not exist. So the mission is really to try to present something that didn’t exist before. Now we can see Czech plays with English subtitles, which is great, but American plays are something that does not exist in the Czech Republic, at least not in Brno, so that is our mission and we are trying to expand our activities as much as we can. I mentioned the public readings, and we are also starting to do workshops, as soon as next weekend, with professional actors who will try to teach anyone who is some tips about acting. We also have an idea for big screenings of American plays with panel discussions . And we actually have an anniversary event coming up next when there will be three plays in three days, “Walk in the Woods”, “Love Letters”, and “Wenceslas Square”. The first two are plays that we did last year, and there will be a workshop, there will be a public reading, and there will even be a party, all in the same weekend, so it’s actually a very grand event that we are very excited about.

BD: Do you sense that there’s a growing market for English-language theatre in Brno?

ND: I do feel like there is. To be honest, it was one of my disappointments when I arrived in Brno. I actually tried to find some English theatre, to see and to act in it, and I couldn’t. Three years ago it was almost not there, so I was a bit disappointed. And that’s when I discovered BEST Divadlo, that I got back into this. So Brno is becoming more and more international, we all see it, everywhere, every week, people in restaurants and bartenders and everyone speaks much more English than before. Even for me I can see a difference since three years ago. And we actually contacted a lot of companies, such as IBM, Redhat, Lufthansa, companies who have foreigners as employees, and they are very excited about that. We offered them some kind of discount in exchange for internal marketing, and they’re all very receptive and very interested, so that really pushed us forward.

BD: So you got sponsorship from them?

ND: Well not sponsorship exactly… they don’t give us money but they do advertise us. We do have sponsorship from the mayor’s office, which gave us a grant to help us get started in this mission to offer something that didn’t exist before.

BD: Talking about the theatre scene in Brno, is there anything that you think is still missing?

ND: I do not speak Czech, at least not well enough to go to see a play. So I will not at all presume to talk about the Czech scene. I’ve been to a play with English subtitles, which is really a great new thing. But honestly I’m not the best person to talk about the Czech scene. I can see that it’s very vibrant, with so many theatres, and I can see that there are so many plays, even video screenings. Just yesterday there was a video screening of King Lear in Scala. It’s really something that I can see is very alive and full of diversity, so I would say that Czech theatre is quite amazing, at least in its variety.

You can find out more about BEST Divadlo’s anniversary party on the Facebook page for the event.

Brno Daily is a proud media partner of BEST Divadlo.

Facebook Comments
https://brnodaily.com/2019/02/26/culture/interview-nicolas-damoiseau-of-best-divadlo-talks-to-brno-daily-about-their-latest-show/https://brnodaily.com/wp-content/uploads/2019/02/nicolas-damoiseau-1.jpghttps://brnodaily.com/wp-content/uploads/2019/02/nicolas-damoiseau-1-150x107.jpg2019-02-26T11:51:01+01:00Jack StephensArt & CultureBrno,Culture,Czech Republic,English-friendly,Expats Czechia,TheatreOn Sunday 24 February, BEST Divadlo's new show “Wenceslas Square” opened at Kabinet Muz. We sat down for a coffee with the lead actor from the show, Nicolas Damoiseau, to find out more about the show and what audiences can expect...Photo credit: Dina Khusainova ph. BD: So Nicolas, could you...Jack Stephens jack.stephens50@gmail.comAuthorA writer and English teacher originally from London who has lived in Brno since 2011, interested in politics, low culture, and all things strange and/or Czech.Brno Daily

A writer and English teacher originally from London who has lived in Brno since 2011, interested in politics, low culture, and all things strange and/or Czech.
View all posts by Jack Stephens →
« Last Chance to Skate Under Jošt
Brno’s Public Transport to Celebrate its 150th Anniversary with Numerous Events in 2019 »