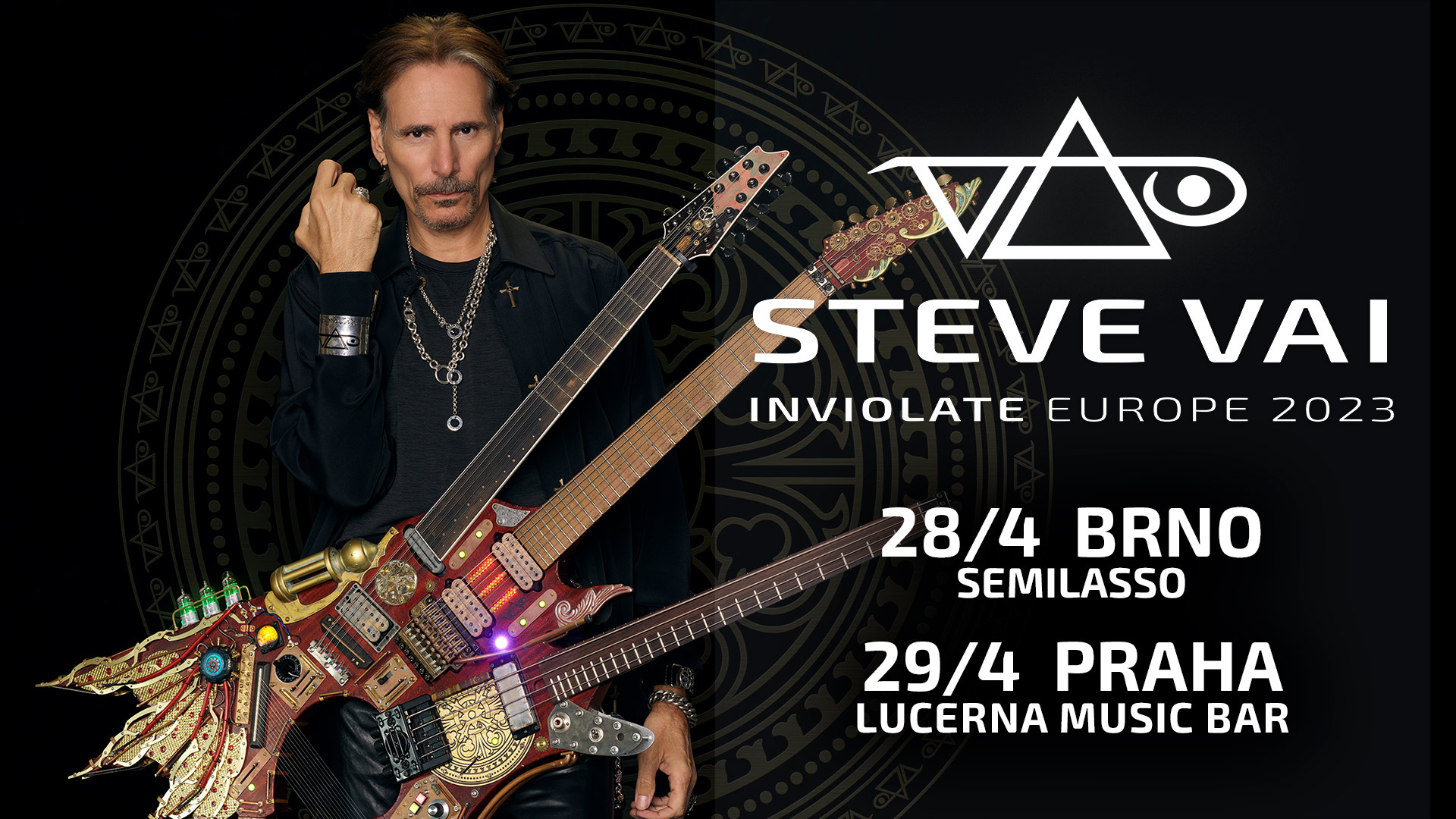 The renowned guitarist will perform in Brno and Prague, on 28 April and 29 April, respectively. Photo credit: echopromot.

Brno, Jan 23 (BD) – Steve Vai has announced his return to Europe, where he will play shows from March to May. The European leg of the Inviolate World Tour will begin on 24 March in Lisbon, Portugal, and will take him through Spain, Italy, Germany, Hungary, Croatia, Slovakia, Serbia, Bulgaria, Turkey, Greece, Romania, the Czech Republic, Poland, Latvia, and Estonia, finishing in Helsinki, Finland, on 7 May.

The tour will stop in Brno’s Semilasso on 28 April, and make its next stop at Lucerna Music Bar in Prague on 29 April. Tickets are CZK 1,290, and are on sale now from Ticketmaster and ticketportal.

“Our previous North American tour in the autumn was excellent,” said Vai. “I’m excited to finally bring Hydra to Europe, because I couldn’t make it on the last EU tour. The response to Inviolate has been overwhelmingly positive, which has shown in the press, attendance, and audience energy, so we’re really looking forward to this EU tour.”

Last year, Steve Vai released a new studio album, “Inviolate”. He staged a successful tour of North America and Europe in support of the release. This year, the guitarist, composer, and lyricist plan to visit most of the continents around the world as part of his Inviolate World Tour.

This month, on 27 January, Vai and his friend John “Gash” Sombrotto will release the album they’ve kept in the archives for more than three decades. “Vai / Gash was written and recorded sort of in a stream of consciousness in 1991 over maybe two weeks in response to my desire to have a certain kind of music to listen to while I was riding around with friends on my Harley-Davidson motorcycle,” said Vai. “One of those friends was John “Gash” Sombrotto, who is a strong vocalist on this record. He’s reminiscent of a certain type of rock music that I enjoyed as a teenager in the ’70s. These records were sitting on the shelf for over 30 years, and they’re only coming out now, in 2023.” So far, three songs have been released: ‘She Saved My Life Tonight’, “In The Wind” and “Busted”.

Steve Vai is a virtuoso guitarist, composer, and producer who is considered by many to be one of the best guitarists of all time. In over 40 years in the business, Vai has sold over 15 million records, won three Grammy Awards, and recorded with musical legends such as Frank Zappa, David Lee Roth, Whitesnake, and many more. Vai has also toured extensively and recorded live projects with G3 (collaborating with various concert lineups including Joe Satriani, Eric Johnson, Yngwie Malmsteen, and Steve Lukather) and Generation Axe, a supergroup that Vai formed with Zakk Wylde, Yngwie Malmsteen, Nuno Bettencourt, and Tosin Abasi. Vai is the author of “Videology: Essential Music Theory for Guitarists”, his first book on music theory, which has helped both beginners and experienced guitarists. He is currently touring North America in support of his latest studio album, Inviolate.

https://brnodaily.com/2023/01/23/events-in-brno/steve-vais-inviolate-tour-comes-to-brnos-semilasso-in-late-april/https://brnodaily.com/wp-content/uploads/2023/01/Steve_Vai_1920x1080-1024x576.jpghttps://brnodaily.com/wp-content/uploads/2023/01/Steve_Vai_1920x1080-150x84.jpg2023-01-23T16:31:40+01:00Bing NiArt & CultureEvents in BrnoBrno,concerts and performances,Culture,Czech Republic,Events in BrnoThe renowned guitarist will perform in Brno and Prague, on 28 April and 29 April, respectively. Photo credit: echopromot. Brno, Jan 23 (BD) - Steve Vai has announced his return to Europe, where he will play shows from March to May. The European leg of the Inviolate World Tour will...Bing NiBing Nibingni1992@gmail.comAuthorPh.D student in Communication Studies, a hopeless cinephile and frontier culture fanatic and fussy music appreciator.Brno Daily