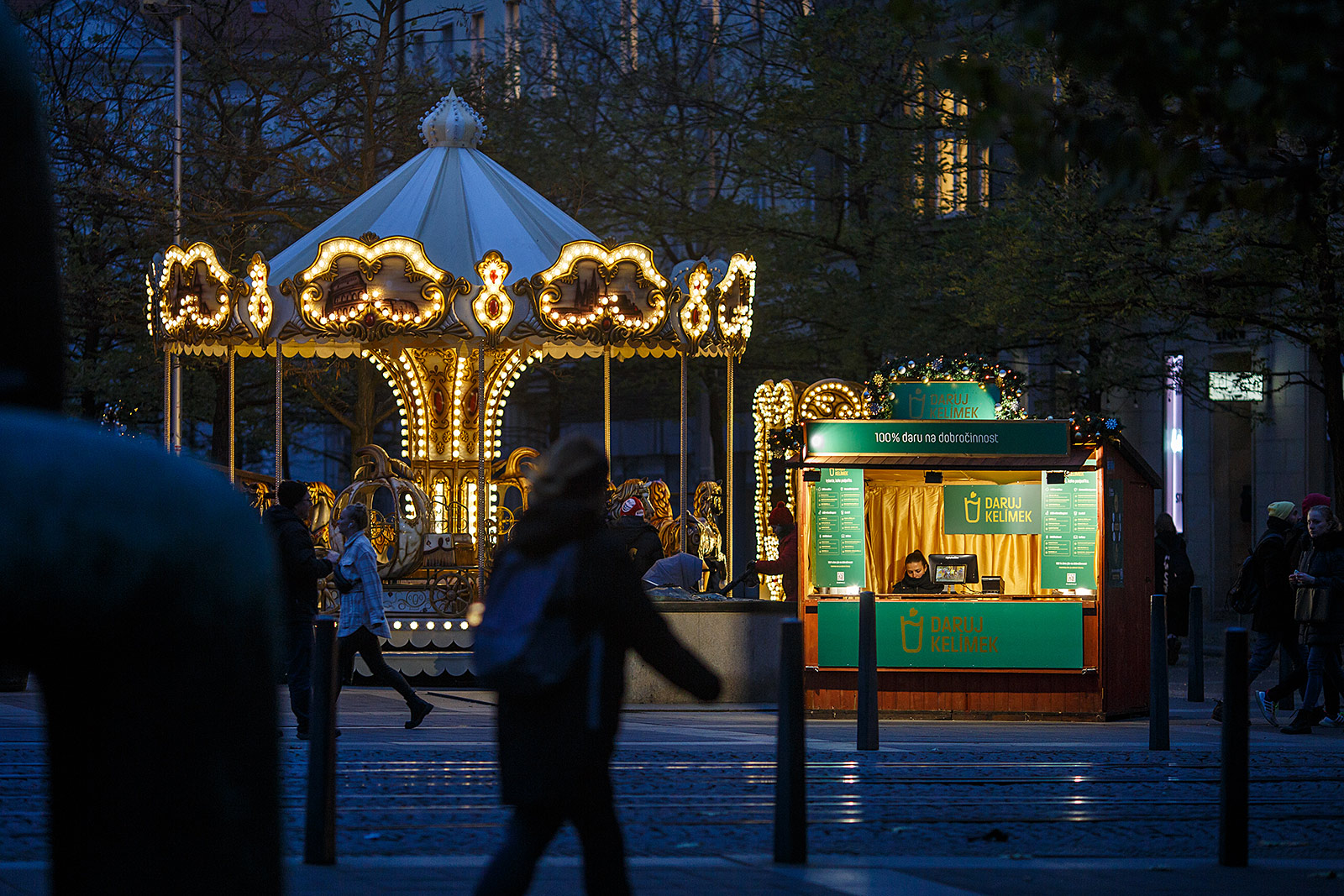 Brno, Jan 9 (BD) – This year, in the first year of the charity project Daruj Kelímek (Donate a Cup), Brno residents and visitors showed that their hearts are open, donating almost CZK 3 million in total to 18 non-profit organisations. Symbolic cheques with the collected amounts were received by all representatives of the participating organisations on 6 January at 1pm at Moravské náměstí, by the statue of Jošt. In addition to donating cups, donations could also be made to a transparent account.

The Daruj Kelímek association was founded by three traditional Christmas market drink sellers Ondřej Šibřina, Adam Vodička and Ondřej Reich. The city district of Brno-střed and TIC BRNO also participated in the implementation. The aim of the organisers was to provide visitors to the Brno Advent Markets with a space for donating and helping charitable organisations.

The project works on the very simple principle of a system of returnable cups. People could decide whether to return the cup after finishing the drink and take back the deposit of 50 crowns or donate it to one of 18 selected charities. “We are thrilled with the results of the collection. I would really like the cup donation to become a new Brno tradition. Just under CZK 3 million in the first year is a fantastic result, and I believe it has a great chance of becoming a tradition,” said Ondřej Šibřina on behalf of the creators.

Stands where people could donate cups were available from 25 November at Zelny Trh, namesti Svobody, and Moravské náměstí. The Municipal District of Brno-střed provided legal support in the preparation of the project, secured the stalls and their operation. “It seems that we have managed to find a way for even people who don’t normally donate to donate. I consider the fact that a large part of the public got acquainted with the activities of 18 charitable organisations to be an equally important benefit of the event. I believed that people had their hearts in the right place, and this was confirmed.”

“It is also worth mentioning the contribution to the transparent account from the pupils from the primary school in Pohořelice; it is very nice that children are also led to help their neighbours,” said Petr Štika, the secretary of the Brno-Central district, who was evaluating the project on the city’s behalf.

Almost 70 volunteers and temporary workers, who worked more than 1400 hours, were involved in the daily operation of the three cup collection stands. In total, more than 57,000 cups were collected, and the total amount collected, including contributions to the transparent account, reached CZK 2,856,750. The most generous day of the advent market was Saturday 17 December, when visitors donated 190,300 crowns via cups.

The organisers and partners hope to make this unique charity project another tradition and an essential part of Brno Christmas. They are also hoping to become an inspiration for others. “Brno was the first city in our country to introduce a returnable packaging system at Christmas markets. The Donate a Cup project is a very meaningful extension of this, and I am glad that we are part of it. Charity and helping the needy are part of Brno Christmas, which is a popular and massively attended event, and can thus help in a really significant way,” said Jana Janulíková, Director of TIC BRNO.

The project worked thanks to good cooperation and the mutual bonding of people who enjoy giving joy at Christmas. “We would like to thank the partners involved, without whom the whole event could not have run smoothly. Whether it was the management of the Brno-střed municipal district, which took care of operational matters, TIC BRNO, which helped with marketing, the supplier of the NICKNACK returnable system, the PROMOPLANET agency, the supplier of the Dotykačka POS system or the authorised Ford CARent dealer,” added Vodička, on behalf of the Daruj Kelímek association.

100% of the money raised will be distributed to charitable organisations. How much was raised for each charity, and a link to the transparent bank account of Daruj Kelímek can be found at darujkelimek.cz.