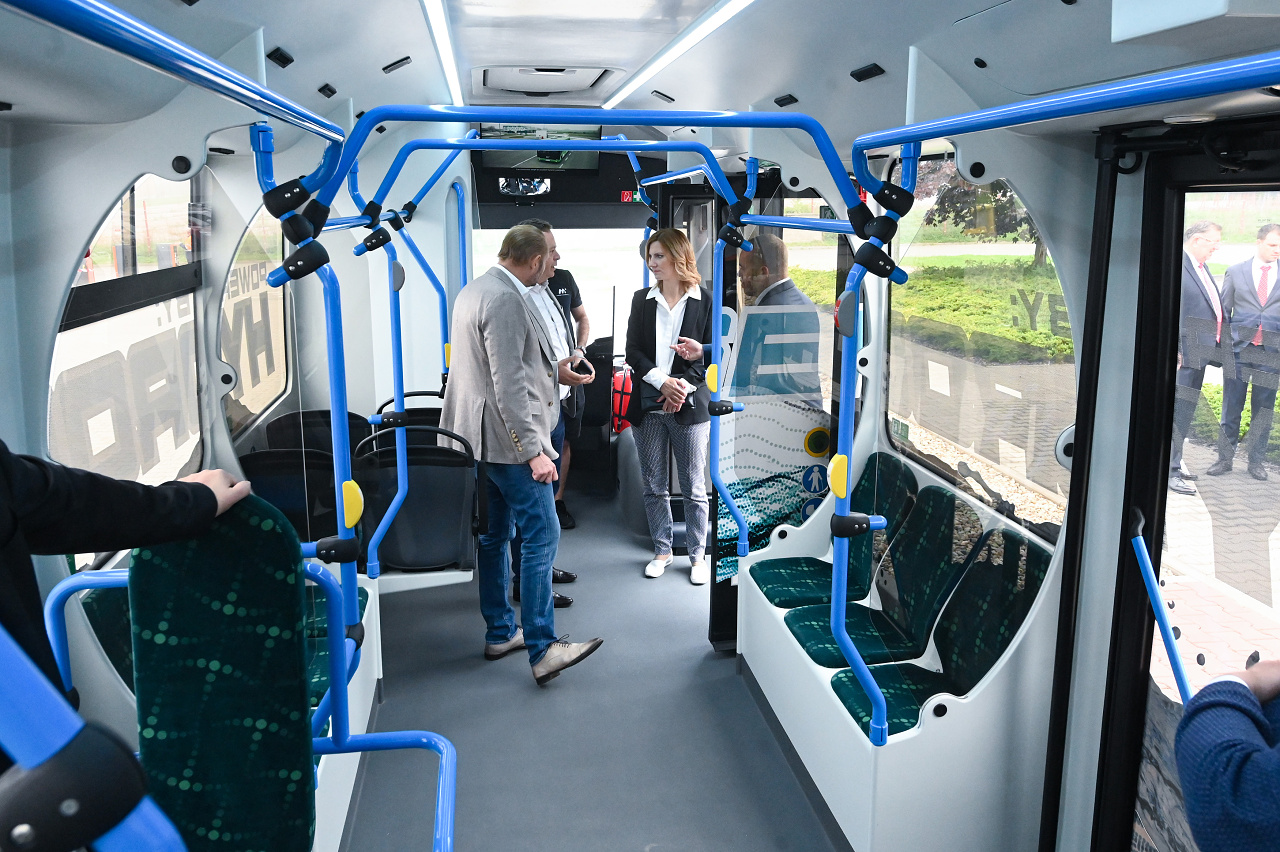 Representatives from Zetor met with the mayor to show her the vehicles. Photo Credit: Marie Schmerková / MMB.

Brno, 11 Sept. (BD) – Hydrogen buses could significantly reduce the burden of emissions, especially in the urban environment, and the City of Brno is considering them. On Friday, a prototype hydrogen bus was presented to the mayor of Brno, Markéta Vaňková by representatives of Mobility & Innovation Production, s. r. o., in cooperation with Zetor Tractors, a. s., during her visit to the transport company.

“Ensuring clean air for our residents is one of my top priorities,” said Vaňková. “By joining the Covenant of Mayors, we have committed to reducing CO2 emissions by at least 40 per cent in the city by 2030. This requires the public and private sectors to work together on a number of measures and innovations. One of the ways to reduce the burden is emission-free public transport.”

The city and its companies have been working intensively on the use of hydrogen since last year. Currently, a feasibility study for the location of an electrolyser to produce hydrogen fuel is being carried out as part of Teplárny Brno’s operations in Maloměřice and Občany. In the future, the plant will produce hydrogen by electrolysis from water using green energy from a recently constructed photovoltaic power plant.

“A filling station for public transport buses should be built in the power station or in its immediate vicinity, bringing emissions to completely zero,” said Vaňková. “The energy for the batteries is provided by a hydrogen cell, so no lengthy recharging is required, but the hydrogen tank fills in just a few minutes. The preparation and subsequent implementation of the project should begin this year, and the first tangible results could be visible as early as next year.”

Interest in such cooperation projects continues to grow. Last year, the Brno Transport Company (DPMB) announced that it was ready to begin trials of hydrogen-powered buses, which are expected to have a longer range than battery-powered vehicles, on its routes.

“Next year, we are preparing the creation of a hydrogen cluster, which will provide a long-term platform for solving issues related to the entire hydrogen process chain, from the production itself, to storage, distribution, filling, and up to the specific use by the end customer in the transport or energy sector. This cooperation is gaining importance at a time when we are trying to ensure maximum energy security and self-sufficiency for Brno,” added Vaňková.

Until now, there are relatively few suppliers of hydrogen-powered buses on the market. “The new production, in which Zetor Tractors could also participate in the future, would therefore expand the supply and availability of such vehicles on the market. I must not overlook the fact that this could create new jobs in Brno. The condition is, of course, that Zetor succeeds in the tender for cooperation with the producer company,” said the mayor.

Examples of the specific products available in the field of hydrogen transport can be seen at the Future Mobility exhibition from 20 to 22 September 2022 at the Brno Exhibition Centre. The event focuses on presenting innovations for the mobility of the future, as well as providing a platform for the exchange of information, knowledge, experience and training. The aim is to create the conditions for a more rapid implementation of modern technologies in transport. Both signatories of the memorandum and the City of Brno will be actively involved.

https://brnodaily.com/2022/09/11/brno/brnos-zetor-tractors-presents-prototype-of-hydrogen-powered-bus/https://brnodaily.com/wp-content/uploads/2022/09/major-bus-jydrogen-credit-Marie-Schmerkova-mmb-1024x682.jpghttps://brnodaily.com/wp-content/uploads/2022/09/major-bus-jydrogen-credit-Marie-Schmerkova-mmb-150x100.jpg2022-09-11T09:58:01+02:00Ilaria BriziBrnoNewsBrno,DPMB,Sustainability,Transport,ZetorRepresentatives from Zetor met with the mayor to show her the vehicles. Photo Credit: Marie Schmerková / MMB. Brno, 11 Sept. (BD) - Hydrogen buses could significantly reduce the burden of emissions, especially in the urban environment, and the City of Brno is considering them. On Friday, a prototype hydrogen...Ilaria Brizi ilabrizi12@gmail.comAuthorItalian girl with a master’s degree in marketing and advertising. I love travelling, reading, writing, listening to music, but most of all I love having breakfast. Against cheese on tuna pasta.Brno Daily

Italian girl with a master’s degree in marketing and advertising. I love travelling, reading, writing, listening to music, but most of all I love having breakfast. Against cheese on tuna pasta.
View all posts by Ilaria Brizi →
« October’s Mental Health Day will Offer A Variety of Activities Focused on Public Mental Health
Brno Firefighters Win National Traffic Accident Rescue Championship »