Nearly 40,000 People Cross The Centre Of Brno Every Day 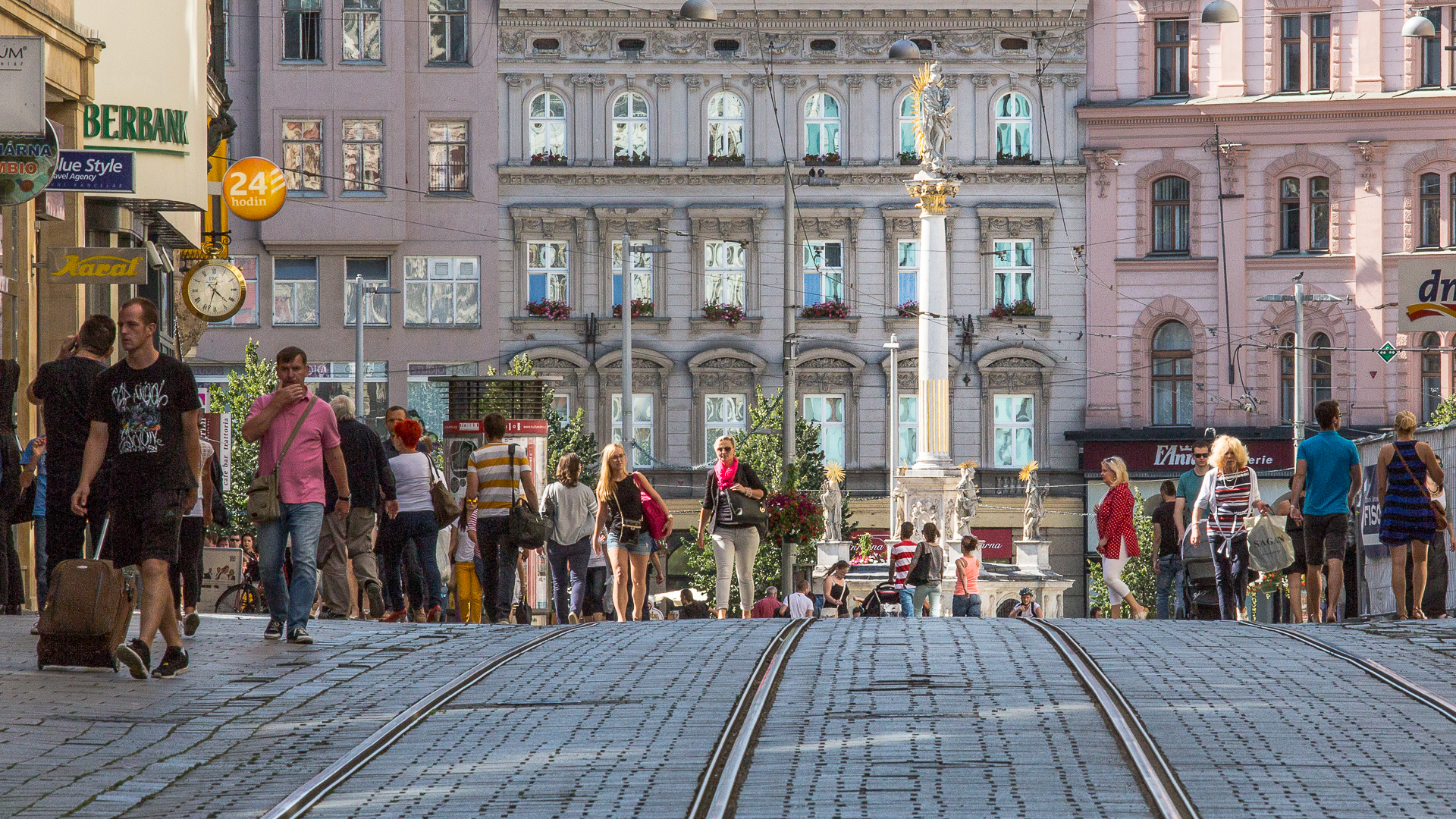 A motion sensor has been recording pedestrian movement in the city centre for the past year. Photo Credit: MMB

Brno, Aug. 31 (BD) – Using a census sensor at the boundary of Masarykova and Namesti Svobody, city officials were able to track the number of people who crossed the centre from 1 August 2021 to 30 July 2022. The results showed that an average of 39,153 people per day passed through in both directions, about the same as the population of Přerov.

Analysis shows that weekends are on average quieter for pedestrians than weekdays, with about 8,000 fewer people. However, the number changes depending on what is going on, if there is a public event, and of course also by the weather.

The census sensor surveys daily pedestrian traffic between Masarykova and Namesti Svobody (in both directions) and shows a particularly low volume of pedestrians on Sundays. The lowest number of pedestrians recorded in the last year was on Christmas Day 2021, when just 7,980 people crossed the site during the entire day.

By contrast, the highest number of people recorded was on Friday, 17 June 2022, when a total of 70,861 people passed between Masaryková and Náměstí Svobody. On this day, events were held in the square in relation to Police Day and the Ignis Brunensis Food & Drink Fest was also taking place. In addition, the end of the school year and semester was slowly approaching.

Indeed, the peaks of highest attendance are often related to cultural and social events in the city centre, such as the Brno Beer Festival on 7 August 2021, and the outdoor festival Street Rave! on nearby Moravské náměstí, which may have had an impact on pedestrian traffic on Masarykova. The Wine Festival event on two consecutive Fridays, 17 and 24 September 2021, also attracted many visitors.

As of 14 March 2022, there was a significant relaxation of measures related to COVID-19, particularly the elimination of the requirement to wear masks in all indoor areas. A month later, with the arrival of Easter, the centre was busy during Maundy Thursday (14 April). The traditional green beer, which could be consumed in restaurants reopened after two years, certainly played an important role. Another significant peak alongside 17 June was seen on 28 July, when the graduation ceremony of the Defence University was held in Namesti Svobody.

During the first half of the reporting period, there was less footfall, probably due to the COVID-19 pandemic. Many companies were still operating (at least partially) in home-office mode, and many colleges and universities were teaching online. Some partial mobility restrictions were also still in place. The progression of the average number of people over time brought the highs of August 2021 to roughly match the lows of late July 2022.

The sensor is operated by VisionCraft on an object owned by the City of Brno, with the permission of the Brno Technical Network. The sensor processes data, does not transmit video or individual images (monitors objects, not licence plates or faces of people) and provides real-time data. The sensor operates continuously 24/7. Connectivity is ensured over the mobile network. VisionCraft follows privacy and privacy regulations; according to the principle of “privacy by design”, it does not process personal data. The sensor record identifies only data that allows the identification of a situation, such as describing the distribution of traffic routes, transitions, obstacles, changing them (such as a new junction modification), identifying the type of moving object and its location in the monitored space, and giving the customer real-time and retrospective analysis of the use of this space at any time.

https://brnodaily.com/2022/08/31/brno/nearly-40000-people-cross-the-centre-of-brno-every-day/https://brnodaily.com/wp-content/uploads/2022/08/brno-centre-pedestrian-MMB-1024x576.jpghttps://brnodaily.com/wp-content/uploads/2022/08/brno-centre-pedestrian-MMB-150x84.jpg2022-08-31T14:56:55+02:00Ilaria BriziBrnoBrno,City Centre,Pedestrian,research,StatsA motion sensor has been recording pedestrian movement in the city centre for the past year. Photo Credit: MMB Brno, Aug. 31 (BD) - Using a census sensor at the boundary of Masarykova and Namesti Svobody, city officials were able to track the number of people who crossed the centre...Ilaria Brizi ilabrizi12@gmail.comAuthorItalian girl with a master’s degree in marketing and advertising. I love travelling, reading, writing, listening to music, but most of all I love having breakfast. Against cheese on tuna pasta.Brno Daily

Italian girl with a master’s degree in marketing and advertising. I love travelling, reading, writing, listening to music, but most of all I love having breakfast. Against cheese on tuna pasta.
View all posts by Ilaria Brizi →
« Czech Politicians Praise Gorbachev’s Role In The Fall of Communism
Photo Exhibition in Brussels Shows Havel’s Meetings with Clinton, Rolling Stones, and Others »