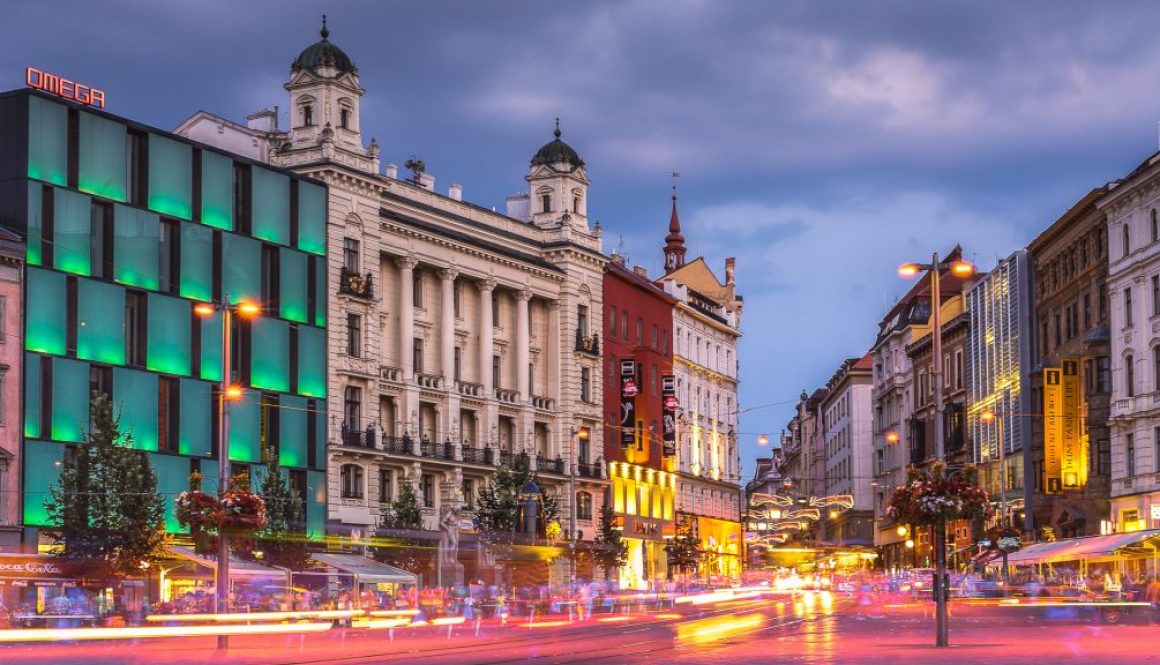 Four cities in the Czech Republic are candidates for European Capital of Culture 2028, and Brno is one of them. Photo credit: kultura.brno.cz

Brno, Aug 29 (BD) – Brno is competing for the title of European Capital of Culture 2028 and its representatives are taking the bid to Prague by bicycle. The group, led by Brno City councillor for Culture Marek Fišer (Pirates), set off this morning at 9am from the New Town Hall in Dominikánské náměstí.

The group of three cyclists will cover a distance of 230 kilometres in three days on a route along secondary roads. Each day the riders will travel approximately 70 kilometres, and are expected at the finish line – the Ministry of Culture on Maltézské náměstí in Prague – in the afternoon of Wednesday 31 August.

Two cities will become European Capital of Culture in 2028, one Czech and one French. In the Czech Republic, Brno, Broumov, České Budějovice and Liberec are in the running. For France, the contenders are: Nice, Clermont-Ferrand, Reims, Rouen, Bourges, Saint-Denis, Amiens and Bastia. The winner will have an extraordinary opportunity for cultural development and promotion not only of the city but also of the entire region.

The procedure for the selection of the city designated as the Capital of Culture involves two stages: the preselection dossier must be submitted by 1 December 2022, and the list of selected cities will be known in the first half of 2023. The winning city will be announced in December 2023.

“We have deliberately chosen the form of bicycle delivery for sending in the application form, which is a nod to the cycling tradition that has profiled Brno in the past as a venue for major championships and races in amateur cycling, track or road,” says Brno 2028 programme director Marcela Straková.

“Brno is already an important cultural metropolis in its own right,” she added. “It has a cultural strategy, countless cultural actors, a number of established events, large cultural institutions are located here, and a strong independent scene is part of Brno’s DNA. The process itself is the most important thing in the candidacy for the Capital of Culture title, and each city is unique, set on the map, in a cultural-historical and social context that needs something different.”

The title is awarded by the European Union with the aim of emphasising the importance of culture for the development of society, cities and entire regions and to draw attention to the diversity and uniqueness of European cultures.

“I am convinced that the city of Brno’s candidacy for the position of European Capital of Culture is an opportunity to show Brno even more as an extraordinary cultural place on the map of Europe,” said project manager Šárka Berková. “In its history, Brno has shown that it can take the lead in the industrial sector. Worth mentioning is Zbrojovka Brno, or the turbulent industrial textile boom of the 19th century, the so-called Moravian Manchester. Culture was no different, and it is not for nothing that Brno is referred to as a city of architecture, especially functionalist architecture, which includes gems of functionalism such as Villa Tugendhat, Hotel Avion, Villa Stiassni or the Morava Palace. But Brno is also the city of the first cafes. And it was cafes that were sought after as cultural centres, especially by artists, philosophers and politicians who worked there. My wish for Brno to be a city of European format in the future, which features both Brno artists in its blossoming cultural programme, who have the full support of politicians and their citizens, and whose work is adequately paid. But also the top of the foreign scene, for whom it will be prestigious to perform in Brno and will have quality conditions and background for their work, and they will be happy to visit Brno again and again as a city with a strong cultural platform.”

https://brnodaily.com/2022/08/29/culture/brno-delegation-cycling-to-prague-to-deliver-brnos-bid-for-the-2028-capital-of-culture/https://brnodaily.com/wp-content/uploads/2022/08/Namesti_svobody-brno-capital-culture-1024x587.jpghttps://brnodaily.com/wp-content/uploads/2022/08/Namesti_svobody-brno-capital-culture-150x86.jpg2022-08-29T13:03:09+02:00Ilaria BriziArt & CultureBrnoBrno,CultureFour cities in the Czech Republic are candidates for European Capital of Culture 2028, and Brno is one of them. Photo credit: kultura.brno.cz Brno, Aug 29 (BD) - Brno is competing for the title of European Capital of Culture 2028 and its representatives are taking the bid to Prague by...Ilaria Brizi ilabrizi12@gmail.comAuthorItalian girl with a master’s degree in marketing and advertising. I love travelling, reading, writing, listening to music, but most of all I love having breakfast. Against cheese on tuna pasta.Brno Daily

Italian girl with a master’s degree in marketing and advertising. I love travelling, reading, writing, listening to music, but most of all I love having breakfast. Against cheese on tuna pasta.
View all posts by Ilaria Brizi →
« New Apple Distribution Store Opens In Brno’s Namesti Svobody
Czech Government Paid CZK 21 Billion For COVID Vaccines, But Used Much Less »