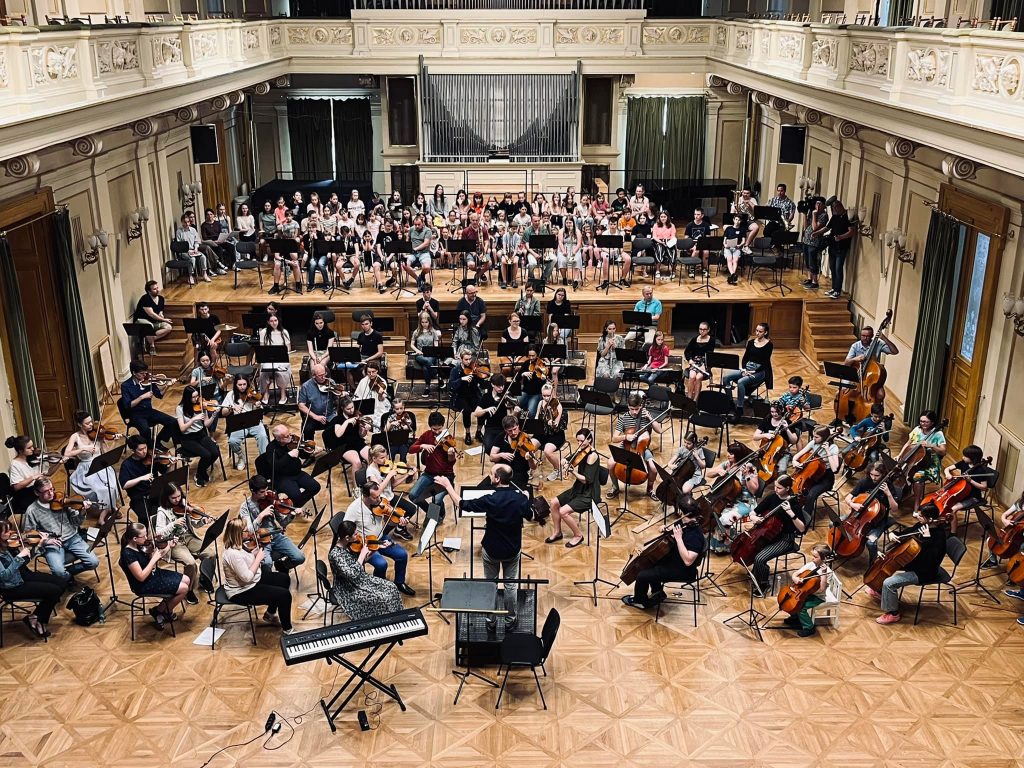 The Gala Concert for this year’s Mozart’s Children Festival will take place this Sunday at the Janáček Theatre. Marie Kučerová, director of Filharmonie Brno, described the production ambitious, unrepeatable and demanding, as in one evening, children will try three different types of cooperation: in the first, they form a large ensemble complemented by professionals, in the second it is the other way around, and in the third, young dancers will join the music. Photo credit: Filharmonie Brno

Brno, June 8 (BD) – Nearly 200 performers will appear on stage on Sunday, with young talent from all over South Moravia far outnumbering the professional musicians. “This is thanks to Kryštof Mařatka’s composition ‘Invisible Forest’, which will be performed in its Czech premiere,” said Kristýna Drášilová, project coordinator and lecturer in education at Filharmonie Brno. “The author has composed it for children of all ages and different musical levels. They form the basis of the orchestra, the adults only complement them. And not only philharmonic musicians, but also teachers from elementary schools and even parents.” The melodramatic fable Gretel was commissioned by the Paris Philharmonic to involve children from troubled slums and then performed in France’s most prestigious concert hall.

It is not only the composition itself that is unique, but also the process of its preparation. “The goal was to allow all musicians who have the desire to play and improve to participate,” said Drášilová. “Since this is a contemporary piece, the orchestra is expected to use non-standard sonic instruments. In addition to this, young children learned to observe the conductor’s gestures during the performance, and even sitting on the chairs was problematic in the beginning. Despite all these pitfalls, the conductor and choirmaster Michal Jančík guided the children to a result that he can proudly speak of as professional.” There are 25 philharmonic musicians in the orchestra for this piece, and about 70 children, supplemented by 80 children from the Kantiléna choir.

The more experienced pupils will perform with the orchestra in the second part of the concert: the symphonic poem ‘Holoubek’ by Antonín Dvořák. The second half of the concert will feature Bohuslav Martinů’s ballet comedy ‘Who is the Most Powerful in the World?’ and the Philharmonic will join forces with the talent of the Brno Dance Conservatory.

The gala concert is the highlight of the festival program, but it is far from the only attraction. There are also concerts for kindergartens and schools, music workshops and the traditional Children’s Soloist Concert. “This will allow children to play with a professional orchestra, with them as soloists. The best from all over South Moravia will perform, and people can look forward to solo dulcimer, accordion, piano, trumpet and harpsichord,” said Petr Karas, director of the co-organising Smetanova Elementary School.

The closing ceremony will take place on Sunday 12 June at 7pm at the Janáček Theatre, and the Children’s Soloists’ Concert will take place on Tuesday 14 June at 6pm at Besední dům. Tickets for both evenings are available in advance, online at filharmonie-brno.cz or at the door before the event.

https://brnodaily.com/2022/06/08/brno/mozarts-children-festival-nearly-200-young-musicians-perform-a-unique-composition-by-krystof-maratka/https://brnodaily.com/wp-content/uploads/2022/06/Mozart-Children-Festival-1-1-1024x768-1.jpghttps://brnodaily.com/wp-content/uploads/2022/06/Mozart-Children-Festival-1-1-1024x768-1-150x113.jpg2022-06-08T14:16:48+02:00Julie ChretienBrnoNewsBrno,Brno Filharmonie,Culture,Festival,NewsThe Gala Concert for this year’s Mozart's Children Festival will take place this Sunday at the Janáček Theatre. Marie Kučerová, director of Filharmonie Brno, described the production ambitious, unrepeatable and demanding, as in one evening, children will try three different types of cooperation: in the first, they form a...Julie Chretien julie.chretien29@gmail.comAuthorA 21 year-old French student currently doing a Master's degree in management and communication in Lyon, France. Always thrilled to learn about new cultures and languages, and also, big fan of foods. Loves cats and karaoke night with friends.Brno Daily

A 21 year-old French student currently doing a Master's degree in management and communication in Lyon, France. Always thrilled to learn about new cultures and languages, and also, big fan of foods. Loves cats and karaoke night with friends.
View all posts by Julie Chretien →
« Concert of Traditional Music From Horňácko At Augustinian Abbey To Open “Brno and Its Temples”
Design Chosen For New Park In Černovická Sands, Combining Nature, Leisure, and Places to Relax »