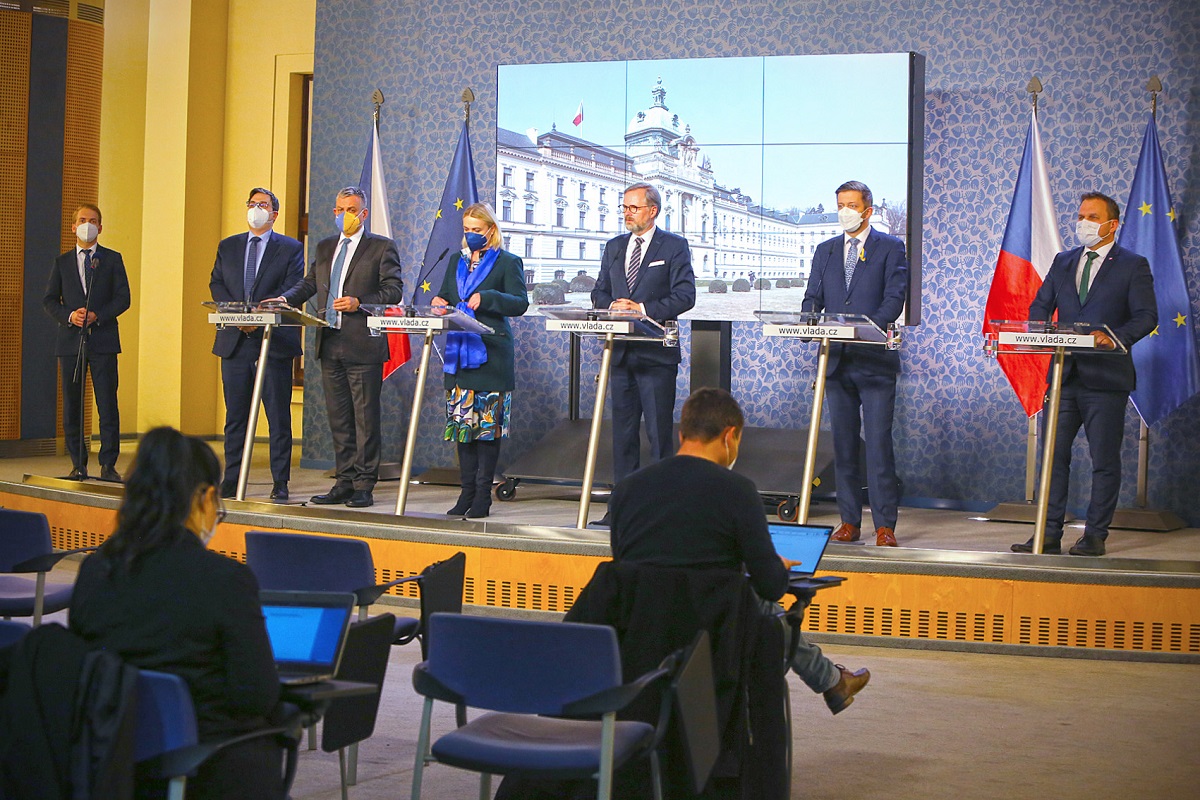 The state of emergency is part of a range of measures taken by the government in response to the developing crisis in Ukraine, and will allow faster and more effective coordination of relief efforts for newly arrived refugees. There are now 30,000 Ukrainian refugees in the Czech Republic. Photo: Government ministers at a press conference, 2 March 2022. Credit: vlada.cz.

Czech Rep., Mar 2 (BD) – The government of Prime Minister Petr Fiala (ODS) has declared a state of emergency in response to the refugee crisis unfolding as a result of Russia’s invasion of Ukraine. The declaration will allow the government to provide more effective assistance to new arrivals. There are now 30,000 Ukrainian refugees in the Czech Republic, with 5,000 more arriving each day, according to Interior Minister Vít Rakušan (STAN).

“I realize what the phrase emergency means to us, we are all nervous about it,” said Rakušan, speaking at a press conference on Wednesday evening. “But it is an instrument that allows for better coordination, centralization, better crisis management. We are only declaring a state of emergency to help our fellow Ukrainians, to help all the people who are taking good care of them.” He added that the instrument should be rehabilitated after the experience of the Covid-19 pandemic, as it is a standard tool of crisis management.

According to Fiala, speaking at the same press conference, the state of emergency will come into force on Friday for a period of 30 days. He said it is being brought in strictly to help the government, regions, and municipalities coordinate quicker and more flexible assistance to refugees fleeing the Russian aggression in Ukraine, and to ensure decent living conditions, including the opportunity to participate fully in life in the Czech Republic. He reiterated that Czech citizens are in no danger from the situation.

Alongside the state of emergency, Fiala said the Defence Ministry budget will be increased by CZK 1 billion, with more funding to be released if necessary. The government will discuss the further donation of military aid to Ukraine later this week. Minister of Social Affairs Marian Jurečka (KDU-ČSL) said that the government is also preparing legislation to simplify the process of providing emergency financial support to refugees, adding that Ukrainians arriving in the Czech Republic would also have access to the job market.

Also announced today, the Czech Republic will withdraw from the International Investment Bank and International Bank for Economic Co-operation, two financial cooperation groups including Russia that are hangovers from the Communist era, and close Czech consulates in St. Petersburg and Yekaterinburg, in further efforts to cut ties with Russia.

https://brnodaily.com/2022/03/02/news/politics/czech-government-declares-state-of-emergency-in-response-to-refugee-crisis/https://brnodaily.com/wp-content/uploads/2022/03/government-ministers-press-conference-2.3.22-credit-vlada.cz_-1024x683.jpghttps://brnodaily.com/wp-content/uploads/2022/03/government-ministers-press-conference-2.3.22-credit-vlada.cz_-150x100.jpg2022-03-02T21:41:33+01:00Jack StephensBreaking NewsCzech Republic / WorldPoliticsBreaking News,Czech Republic,UkraineThe state of emergency is part of a range of measures taken by the government in response to the developing crisis in Ukraine, and will allow faster and more effective coordination of relief efforts for newly arrived refugees. There are now 30,000 Ukrainian refugees in the Czech Republic. Photo:...Jack Stephens jack.stephens50@gmail.comAuthorA writer and English teacher originally from London who has lived in Brno since 2011, interested in politics, low culture, and all things strange and/or Czech.Brno Daily

A writer and English teacher originally from London who has lived in Brno since 2011, interested in politics, low culture, and all things strange and/or Czech.
View all posts by Jack Stephens →
« Brno’s Refugee Assistance Center Comes Into Operation To Help Ukrainian Refugees
A Bubble of Fresh Air For The Birds, Frogs And Residents of Břeclav »