Mechanisation Allows Czech Winemakers To Catch Up With Other Countries 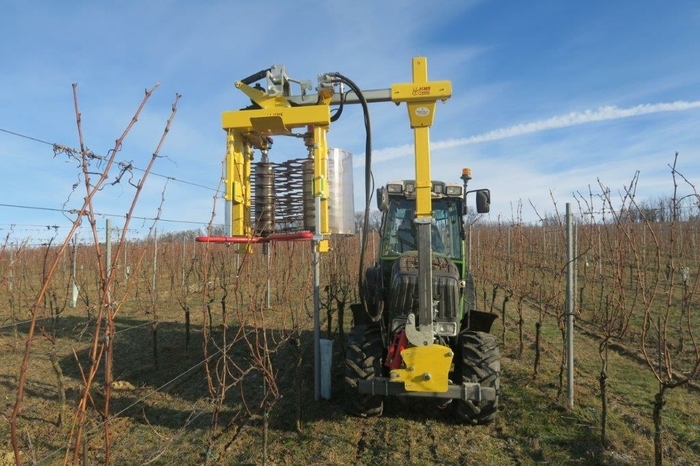 Mechanization in vineyards is allowing Moravian winemakers to reduce the number of labour hours per hectare, and better compete with other countries with more developed wine production. Photo credit: Mendel University.

Brno, Feb 16 (BD) – Grapes are the world’s most cultivated fruit species, with vineyards covering an area of ​​almost 8 million hectares, of which 18,000 are in the Czech Republic. Current wine-growing technologies in this country require approximately 400-500 hours of manual labour for every hectare of fertile vineyards. However, thanks to mechanisation, this is in the process of changing.

“Twenty years ago, labour operations in Moravian and Czech vineyards were associated with a high proportion of manual labour,” said Vladimír Mašán from the Department of Horticultural Technology at the Mendel University Faculty of Horticulture. “In recent years, however, this situation has begun to change rapidly. Modern mechanisation is beginning to replace demanding manual work in fertile vineyards. This applies to a wide range of work operations, such as cleaning trunks, defoliation of shrubs in the grape area, and the grape harvest itself.”

In such wine-growing countries as France, Italy and Germany, the use of modern mechanisation means the vast majority of manual labour operations are significantly lower, ranging from 250 to 300 hours per hectare. “It is only from this comparison that it is clear what our reserves are,” said the head of the Institute of Horticultural Technology, Patrik Burg. “The introduction of mechanisation is clearly supported by the constantly rising cost of human labour, labour shortages multiplied in the recent period by the pandemic, limited movement of seasonal workers, and operations that are often not manageable in the necessary agrotechnical deadlines. To this we can add the low appeal of the work and the high physical burden on workers.”

Those interested can now see modern mechanisation in practice, in a demonstration vineyard which was established in cooperation with Garden Studio, the only one of its kind in the Czech Republic.

« Annual Inflation Reached 9.9% In January, The Highest Since 1998
700th Anniversary of Jan Jindřich of Luxembourg To Be Commemorated By A Series Of Events »