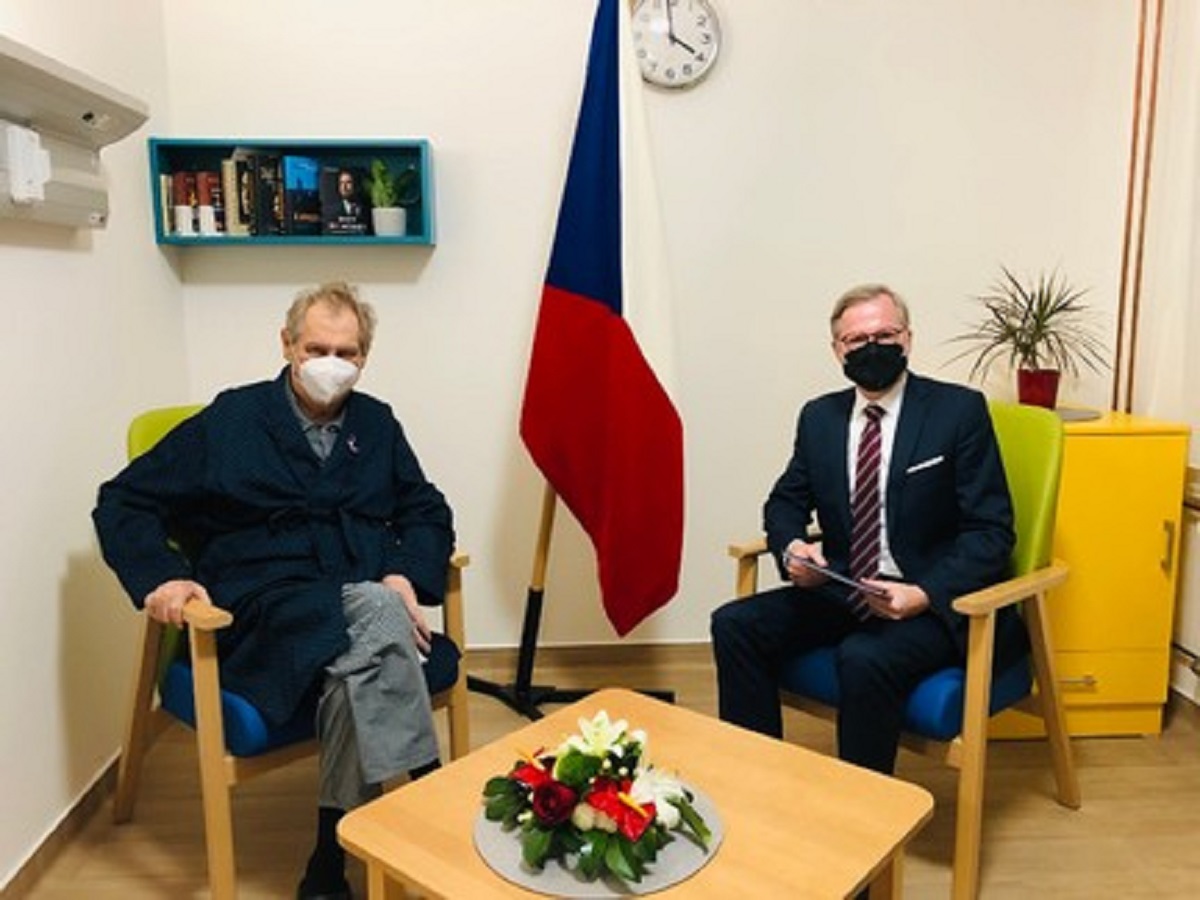 On Wednesday, Fiala met Zeman face to face for the first time since the elections in October, to present the President with his cabinet. Zeman is said to take issue with one of his nominations, Jan Lipavský, the Pirate nominee for Foreign Minister. Credit: Hrad.cz.

Czech Rep, Nov 18 (BD) – The new government came another step closer to reality yesterday, as Spolu leader Petr Fiala, the presumptive candidate for Prime Minister, met Zeman at Prague’s Central Military Hospital to present and discuss his cabinet. Zeman is now scheduled to appoint Fiala as Prime Minister on Friday, November 26th, after which he will spend 10 days meeting each of the new ministerial nominees.

According to Fiala, the president expressed reservations about just one of the names on his list. Although Fiala refused to reveal who, multiple Czech media outlets reported that Zeman objected to Jan Lipavský, the Pirate Party’s nominee for Foreign Affairs Minister. Lipavský is an outspoken critic of Russia and China, and has called for a more robust Czech foreign policy against both.

However, Fiala indicated he would not agree to amend his list, despite the president’s objections. “I am not willing to speculate about replacements. All the names are correct, the list is good,” he said.

The new cabinet will consist of 18 ministers from five parties. Fiala’s Civic Democratic Party (ODS) will have five ministries plus the PM office. The regionalist Mayors and Independents (STAN) will have four ministries, including a double role for leader Vit Rakusan as 1st Deputy PM and Interior Minister. The Christian Democrats and Pirates will have three ministries each, and TOP09 will have two, with leader Marketa Pekarova Adamova elected as speaker last week. 2nd Deputy PMs will include Marian Jurecka, leader of the Christian Democrats and incoming Minister of Labour and Social Affairs, Ivan Bartos, leader of the Pirate Party and soon to be Minister of Regional Development and Digitalisation, and Vlastimil Valek, the TOP09 nominee for the crucial post of Health Minister.

According to Fiala, the three most urgent priorities of the incoming government will be the Covid response, rapidly rising energy prices, and revising the most recent budget, which Fiala said was “unacceptable”, and would create an inflationary spiral.

https://brnodaily.com/2021/11/18/news/politics/zeman-to-appoint-fiala-as-new-pm-on-november-26th-before-10-days-meeting-ministerial-nominees/https://brnodaily.com/wp-content/uploads/2021/11/img_4631-1024x768.jpghttps://brnodaily.com/wp-content/uploads/2021/11/img_4631-150x113.jpg2021-11-18T11:03:51+01:00Jack StephensCzech Republic / WorldPoliticsCzech Republic,Politics,ZemanOn Wednesday, Fiala met Zeman face to face for the first time since the elections in October, to present the President with his cabinet. Zeman is said to take issue with one of his nominations, Jan Lipavský, the Pirate nominee for Foreign Minister. Credit: Hrad.cz.Czech Rep, Nov 18...Jack Stephens jack.stephens50@gmail.comAuthorA writer and English teacher originally from London who has lived in Brno since 2011, interested in politics, low culture, and all things strange and/or Czech.Brno Daily

A writer and English teacher originally from London who has lived in Brno since 2011, interested in politics, low culture, and all things strange and/or Czech.
View all posts by Jack Stephens →
« Dry September Highlights Concerns About Drought In South Moravia
MINT Market Returns To Brno For Autumn Edition »