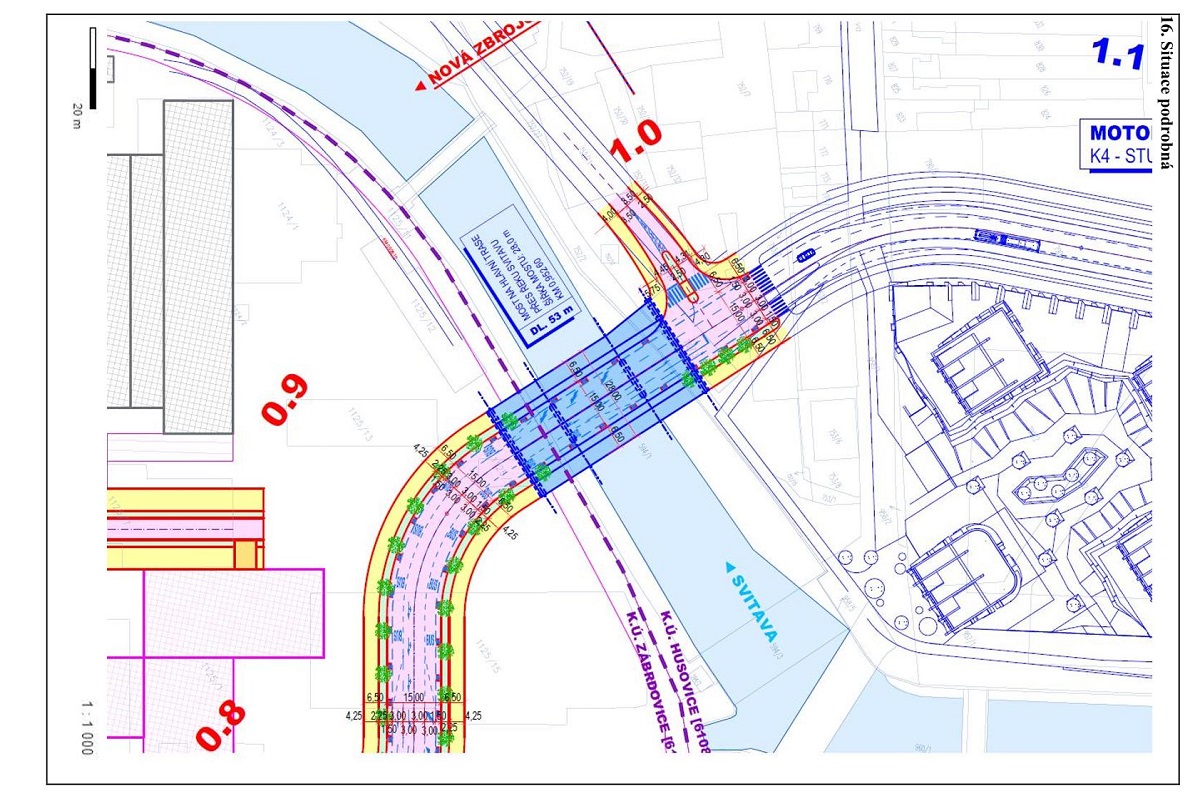 Two revitalized brownfields in the Nová Zbrojovka district will be connected by a new bridge, whose design will be chosen through an urban-architectural competition. The approximate cost of the project is expected to be around CZK 223 million. Photo Credit: Courtesy of MMB.

Brno, Aug 20 (BD) – Two revitalized brownfields sites in the Nová Zbrojovka district will be connected by a new bridge, with a design to be selected through an urban-architectural competition. While the former premises of Zbrojovka Brno and Motorárny Zetor are being reconstructed by private property developers, the bridge between them will be financed by the city, at an estimated cost of around CZK 223 million, with a contribution from investors.

Brno City Council has approved a proposal to create an investment plan for the project, entitled “Nová Zbrojovka – the interconnection of the district across the Svitava River”. The investment plan will be followed by a feasibility study, planning documentation for zoning decisions and then building permits, and finally selection of the contractor and construction.

The bridge will connect the Brno-North and Brno-Židenice city districts across the river Svitava. The proposed transport infrastructure envisages a road bridge across the Svitava connecting in the north-west to Tomkovo náměstí, as well as connecting to the Svitavy embankment.

“The bridge, 53 meters long and 28 meters wide, will have four lanes – two lanes will be reserved for public transport and the other two for individual car traffic. Cyclists will have their own 1.5 meter wide lanes on either side of the bridge. 6.5 meters in both directions is then reserved for pedestrian movement,” said Mayor of Brno Markéta Vaňková (ODS). “An urban-architectural single-phase open competition for the design of the bridge will be announced. Brno City Council has agreed to the project, and ordered the Director of the Brno City Architect’s Office (KAM) to submit the competition conditions to us by November for approval. “

The sponsor of the design competition will be the City of Brno, and the preparation and organizational support for the competition will be carried out by KAM. “We consider an architectural competition to be the best and most transparent way to select not only a quality design for the new bridge, but also a partner to work with for further stages of project documentation,” said First Deputy Mayor Petr Hladík (KDU-CSL). “Another benefit is that the competition will provide not only the form of the bridge, but also a concept for the adjacent public waterfront spaces. The proposed design, including anti-flood measures, will form the basis for further plans for this space, which have not yet been developed.”

According to Filip Chvátal (KDU-CSL), Brno City Councillor for Planning, the competition is scheduled to open in November, the deadline for submitting tenders should be at the beginning of February 2022, and the final selection should be made in mid-March.

Facebook Comments
https://brnodaily.com/2021/08/20/brno/revitalized-brownfield-sites-at-nova-zbrojovka-and-motorarna-zetor-to-be-connected-by-new-bridge/https://brnodaily.com/wp-content/uploads/2021/08/new-bridge_Credit_MMB-1024x679.jpghttps://brnodaily.com/wp-content/uploads/2021/08/new-bridge_Credit_MMB-150x100.jpg2021-08-20T09:56:03+02:00Shyam MakwanaBrnoNewsBrno,Construction,NewsTwo revitalized brownfields in the Nová Zbrojovka district will be connected by a new bridge, whose design will be chosen through an urban-architectural competition. The approximate cost of the project is expected to be around CZK 223 million. Photo Credit: Courtesy of MMB. Brno, Aug 20 (BD) - Two...Shyam MakwanaShyam Makwanashyammakwana1210@gmail.comAuthorA passionate writer, excited about exploring interesting things on planet Earth. Fascinated and motivated by positive surroundings. Curious about current affairs. Brno Daily