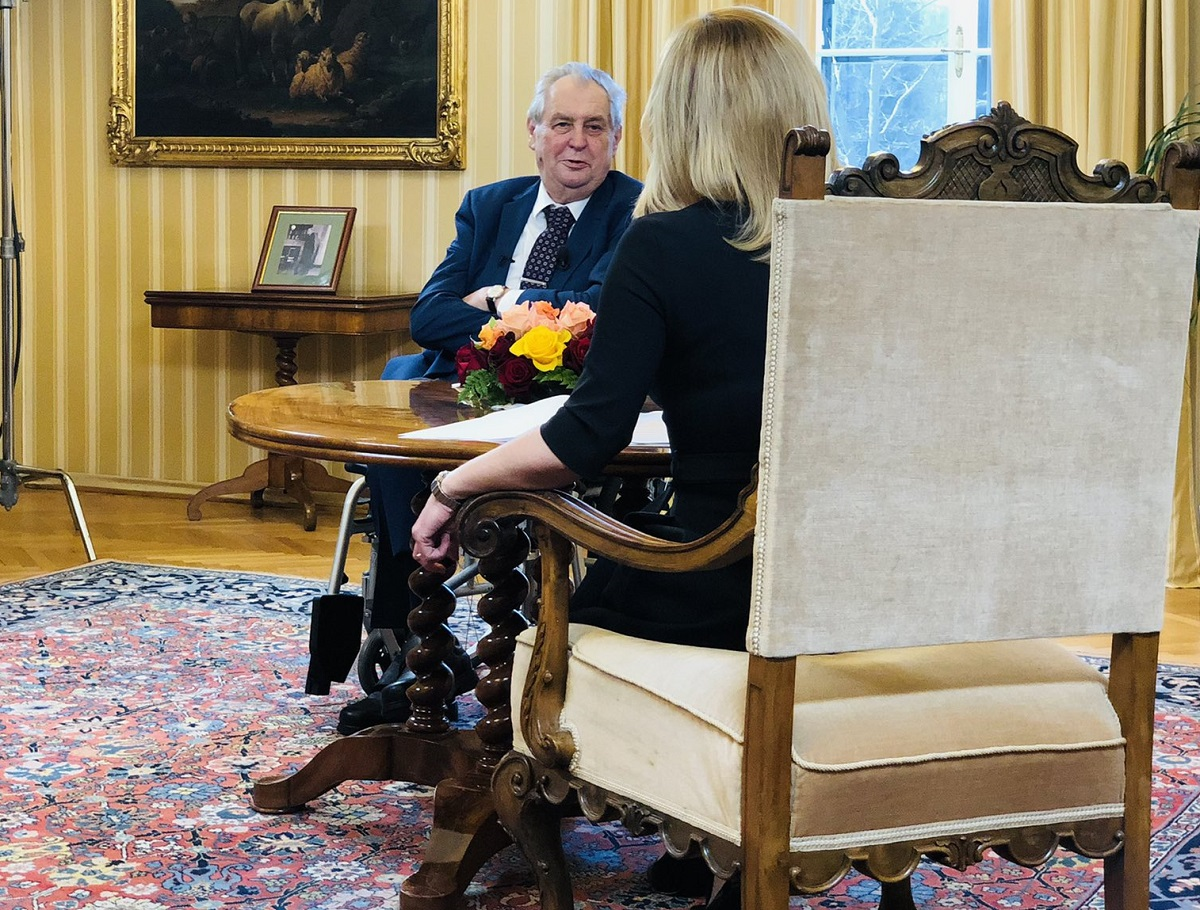 On Sunday, President Miloš Zeman commented publicly for the first time on last week’s revelations about the Vrbětice explosion. He said that there were two conflicting explanations for the events, and that the explosion could have been caused by staff errors rather than Russian agents. Many in the opposition responded with anger to Zeman’s claims. Photo Credit: President’s spokesman Jiří Ovčáček via Twitter.

After a week of silence, President Miloš Zeman commented on the case. He said in the speech that there are two versions of what happened in 2014.

“We are working with two investigative versions. The first, that is, the original, that there was an explosion due to unprofessional handling of explosive material, and the second, that it was an act of a foreign intelligence service. I take both of these versions seriously and I wish for them to both be thoroughly investigated”, said Zeman.

The president said he agreed that, if Russian agents are behind the explosion, the Czech Republic should exclude Rosatom from the tender for the expansion of the Dukovany Nuclear Power Plant. However, if the original conclusion is confirmed that the explosion was caused by unprofessional handling of the material, it will have extensive domestic political consequences.

“The investigation at the time concluded that [the explosions] were caused by unprofessional manipulation during the removal of ammunition material,” said Zeman. He added that the Security Information Service had not mentioned the Vrbětice case in its annual reports in the six years since then.

“I hope we know the truth. We will find out if this suspicion is justified. And in such a case, the Russian Federation must pay for this possible terrorist act, for example, by not participating in the tender for the completion of the power plant in Dukovany,” he said.

Opposition politicians were quick to respond to Zeman’s claims. Ivan Bartoš, leader of the Pirate Party, argued that the evidence that had been presented was sufficient. His colleague in the Pirates and Mayors alliance, Vít Rakušan, the leader of STAN and a member of the House Security Committee, said that Zeman either does not have accurate information or is deliberately interpreting it incorrectly.

“As a member of the Security Committee, I must say that (Zeman) does not have accurate information, and is either deliberately misinterpreting it to the public or is just mistaken. In any case, we have received complete information from the BIS and, on that basis, I must take the side of our rapporteurs. I can only speculate why he is downplaying the aggression of the Russian Federation. I can only guess why he is opening the gates for disinformation campaigns”, Rakušan wrote on Twitter.

The leader of TOP 09, Markéta Pekarová Adamová, was sharply critical of the President’s message, suggesting that the speech was intended primarily for the audience of Russia.

KDU-ČSL leader Marian Jurečka noted that Zeman had not met with representatives of the Czech secret services during the week since the publication of the information.

“I would expect the Commander-in-Chief of the Armed Forces of the Czech Republic to be able to analyze the situation faster, I do not understand why he did not meet with the directors of our information services. He completely missed out the major events in Britain in 2018, which brought important developments in the investigation around Vrbětice!” wrote Jurečka on Twitter.

On the other hand, Jan Hamáček, the leader of CSSD, the junior coalition partner in the government, praised the president’s contribution, even though Zeman did not fully endorse the conclusions of the security services that Hamáček and Babiš had presented to the public.

“I like Miloš Zeman and therefore I do not want to criticize him. He confirmed that the government had informed him, and that he supported our actions. I am glad that the constitutional officials are acting in concert in fundamental steps”, wrote Hamáček on Twitter.

However, his party colleague Jiří Dienstbier, a frequent critic of the CSSD’s participation in the current government, offered an opposing view, describing the speech on Twitter as “joy for the Russians and our extremists, just not the Czech interest.”

Zeman was also criticised by various senators, who have long been critical of his presidency, such as Zeman’s opponent in the last presidential election, Jiří Drahoš. “Milos Zeman was not taken by surprise. It took him a week to come up with a meaningless speech in which he again questioned the work of the BIS and said that it could all have been completely different. They can be satisfied in Moscow”, said Drahoš.

Facebook Comments
https://brnodaily.com/2021/04/26/news/politics/president-zeman-breaks-silence-on-vrbetice-affair-to-opposition-anger/https://brnodaily.com/wp-content/uploads/2021/04/President-Milos-Zeman-interview-credit-Jiri-Ovcacek-1024x777.pnghttps://brnodaily.com/wp-content/uploads/2021/04/President-Milos-Zeman-interview-credit-Jiri-Ovcacek-150x114.png2021-04-26T12:53:16+02:00Benedetta PisaniCzech Republic / WorldPoliticsCzech Republic,Politics,ZemanOn Sunday, President Miloš Zeman commented publicly for the first time on last week’s revelations about the Vrbětice explosion. He said that there were two conflicting explanations for the events, and that the explosion could have been caused by staff errors rather than Russian agents. Many in the opposition...Benedetta PisaniBenedetta Pisanibenedetta.pisani@edu.unito.itAuthorHuman rights, equality, and sustainability activist. Passionate about writing, drawing, empathic listening, and social commitment.Brno Daily