This Week Marks 82 Years Since the Nazi Occupation of Czechoslovakia 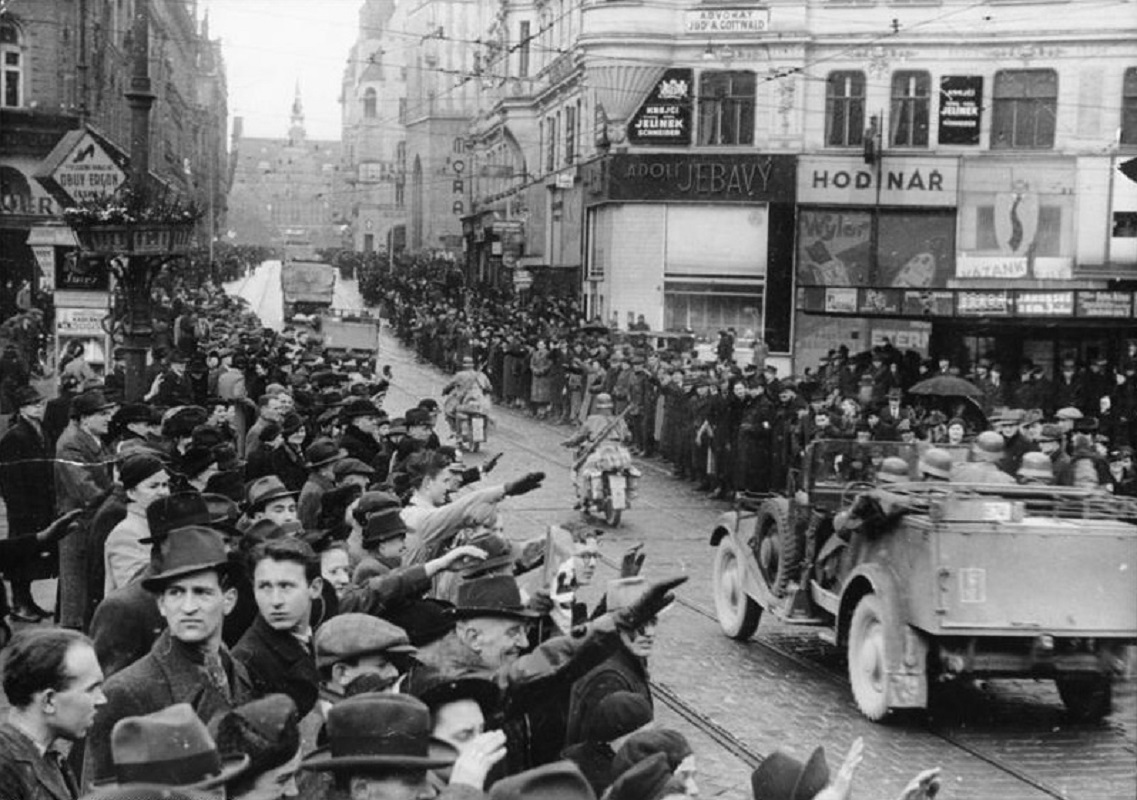 In March 1939, Adolf Hitler’s forces crossed the border with Czechoslovakia and occupied Bohemia and Moravia. The territory was under Nazi rule for six years, during which Jews and other groups were deprived of their rights and thousands of people were sent to concentration camps, where the majority did not survive. Photo: German troops in Brno. Credit: Bundesarchiv Bild under license CC BY-SA 3.0 DE via Wikimedia commons.

Brno, Mar 16 (BD) – This year marks the 82nd anniversary of the Nazi occupation of Czechoslovakia. On March 14th, 1939, the first of the Nazi occupying forces invaded the country, as Slovakia declared its independence. The following day, Nazi troops occupied all major cities and on March 16th, the Protectorate of Bohemia and Moravia, a partially annexed territory of Nazi Germany, was established.

The invasion of Bohemia and Moravia in March 1939 was a violation of a previous peace agreement made only months earlier. In 1938, Hitler demanded that the border territory of the Sudetenland, where three million ethnic Germans lived, be ‘‘returned’’ to Germany, otherwise he would declare a European war. In exchange for a pledge of peace, Benito Mussolini, French Premier Edouard Daladier, and British Prime Minister Neville Chamberlain signed the Munich Pact with Hitler in September 1938, thereby handing over the Sudenland to Germany.

The agreement, which was evidently a negotiating ploy by Hitler, also included 66% of Czechoslovakia’s coal, 70% of the country’s iron and steel, and 70% of its electrical power, placing Czechoslovakia in a vulnerable position. On March 15th, Hitler threatened to bomb the capital city of Prague unless his troops were given free passage across Czech borders, which was granted. That day, Nazi troops occupied Bohemia and Moravia without resistance from the provinces.

On March 17th, German Chancellor and Führer of the Nazi Party Adolf Hitler visited Brno. (Watch the Associated Press video footage of “Hitler In Bruenn” here or read a review of the Video: The Day Hitler Came To Brno by Bruno Zalubil).

The new territory was formally led by President Emil Hácha, but power was actually held by the Reichsprotektor (“Imperial Protector”), a Nazi official appointed by Berlin. The occupation lasted until the end of World War II. During this time, Jews were subjected to the same conditions as in other Nazi-occupied countries, which prohibited them from working in many professions and excluded them from the political, cultural and economic spheres. They were not permitted to be in public spaces such as restaurants, swimming pools or cinemas, and many Jewish-owned businesses were attacked by non-Jews.

The Theresienstadt Ghetto north of Prague was created in 1941, and over 140,000 Jews lived there in harsh conditions. 33,456 people died in the ghetto, and over 80,000 people were deported to other concentration camps to the east, where most of them died. 2,418 people were able to escape or were released. The camp was liberated on May 9th, 1945, by Soviet troops

https://brnodaily.com/2021/03/16/news/this-week-marks-82-years-since-the-nazi-occupation-of-czechoslovakia/https://brnodaily.com/wp-content/uploads/2021/03/German-motorized-troops-in-Brno-credit-German-Federal-Archive-via-Wikimedia-1024x720.jpghttps://brnodaily.com/wp-content/uploads/2021/03/German-motorized-troops-in-Brno-credit-German-Federal-Archive-via-Wikimedia-150x106.jpg2021-03-16T09:35:23+01:00Kim BingelCzech Republic / WorldBrno,Czech Republic,History,NewsIn March 1939, Adolf Hitler’s forces crossed the border with Czechoslovakia and occupied Bohemia and Moravia. The territory was under Nazi rule for six years, during which Jews and other groups were deprived of their rights and thousands of people were sent to concentration camps, where the majority did...Kim BingelKim Bingelkjbingel@gmail.comAuthorSouth African in Brno. Independent international traveller. Enjoys nature and a sustainable lifestyle.Brno Daily