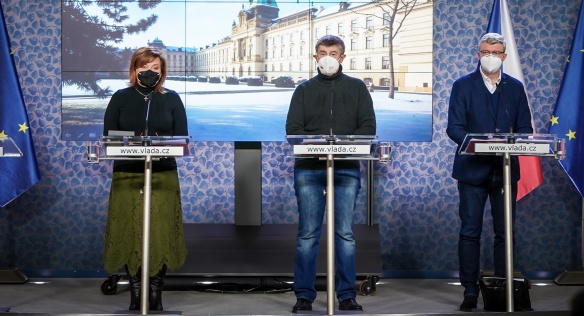 In response to the refusal of the Czech Parliament on Thursday to extend the state of emergency, the Governors of the 14 regions of the Czech Republic have issued a request for a new state of emergency to be imposed from midnight tonight, with a series of conditions attached. The government has agreed to the request, but doubts remain about the constitutionality of the measure. Photo credit: vlada.cz

Czech Rep., Feb 14 (BD) – The Governors of the Czech Republic’s 14 regions have jointly requested, through the Association of the Regions (AKČR), a new state of emergency of 14 days to help deal with the ongoing pandemic in the country. The previous state of emergency is due to expire at midnight tonight after the Czech parliament refused on Thursday to extend it again, throwing the government’s coronavirus strategy into chaos.

The regional governors agreed on a common position on Sunday morning. According to Martin Kuba (ODS), Governor of the South Bohemian Region and Chair of AKČR, the governors’ move was partly at the request of Prime Minister Andrej Babiš (ANO). “We can see that some governors have a very serious situation in their regions. They have crowded hospitals. We did not want to allow each part of the republic to function differently. We are currently in a situation where half of the people are angry with us that the country is not open, and half of the people are worried about it,” Kuba told Czech Television.

However, in return, the AKČR request was accompanied by eight conditions which the governors say are crucial for the effective management of the pandemic going forward. A key point for the governors is that the 14-day measure should give the parliamentary parties time to find a political resolution to the current crisis, and allow for the passing of legislation to make the anti-coronavirus measures more legally and politically sustainable. The government is due to discuss a possible “Pandemic Law” on Monday, before the Prime Minister meets with members of the opposition on Tuesday.

The governors also expressed support for the reopening of schools and demanded more clarity for shops and services, as well as an increase in the use of self-testing in companies.

The eight conditions requested by AKČR, and agreed by the government, stipulate that:

The consequence of this new state of emergency being enacted is that the only change from tomorrow will be the return to full operation of government and public institutions. However, Jan Grolich (KDU-CSL), Governor of South Moravia, was keen to stress that this united position from the regional authorities was not a return to the previous status quo.

“It’s not about giving them a state of emergency according to their ideas and on a golden platter, so to speak,” he said. “We have clearly agreed that we are giving the government 14 days under clearly-defined conditions. For me, the priority is that children can return to school from March – especially final year students, before gradually other years follow.” Moravian-Silesian Regional Governor Ivo Vondrák (ANO) wrote on Twitter: “At the moment, this is the only way to deal with the crisis situation in our country.”

Interior Minister Jan Hamáček (ČSSD) confirmed the agreement, writing on Twitter that: “We have agreed on a further joint approach in a very complicated epidemiological situation,” and promising to continue coordination of the measures with governors. This was later confirmed by a government press conference.

Grolich emphasised the extremely serious state of the pandemic as a reason for the governors’ actions, especially in light of the recently-discovered mutations. 48% of samples analysed in Brno University Hospital in the first week of February were of the British mutation. The governors want to be included in the planning of crisis measures from now on. According to Grolich: “We will meet regularly with the government every week, we will evaluate these measures. We agreed among the governors that the biggest risk is the number of beds in overcrowded intensive care units. We will gradually evaluate whether it is possible and under what conditions to open small shops, small services, and sporting and cultural activities.”

However, some opposition figures and constitutional experts have warned that the reinstatement of the state of emergency may be unconstitutional, coming so soon after the previous one was rejected by parliament. According to the Czech Constitution, the government needs the approval of the Chamber of Deputies to extend a state of emergency past 30 days.

“If the Chamber of Deputies cancels the state of emergency or refuses to extend it, the government cannot immediately decide to declare another state of emergency. In such a case, the Chamber of Deputies would be stripped of its powers of scrutiny,” said Miloš Vystrčil (ODS), Chair of the Czech Senate. He added that the legal system offers a number of ways to combat the epidemic without the need to “circumvent or trample on the constitutional order.”

Some constitutional experts agree. Talking to Czech news website Seznam Zprávy, Jan Wintr of the Law Faculty at Charles University said that: “If the provisions of the law could be interpreted as meaning that the government just shrugs and declares a new state of emergency, this makes this legislation useless.” Given the widespread public anger about the continuing government measures, it seems likely that the attempt to reinstate the state of emergency will be met with legal challenges, and may well end up in the constitutional court.

Facebook Comments
https://brnodaily.com/2021/02/14/news/politics/government-declares-new-state-of-emergency-at-request-of-regional-governors/https://brnodaily.com/wp-content/uploads/2021/02/babis-press-conference-140221-credit-vlada.cz_.jpghttps://brnodaily.com/wp-content/uploads/2021/02/babis-press-conference-140221-credit-vlada.cz_-150x81.jpg2021-02-14T20:40:25+01:00Jack StephensBreaking NewsCzech Republic / WorldPoliticsCoronavirus,Czech Republic,PoliticsIn response to the refusal of the Czech Parliament on Thursday to extend the state of emergency, the Governors of the 14 regions of the Czech Republic have issued a request for a new state of emergency to be imposed from midnight tonight, with a series of conditions attached....Jack Stephens jack.stephens50@gmail.comAuthorA writer and English teacher originally from London who has lived in Brno since 2011, interested in politics, low culture, and all things strange and/or Czech.Brno Daily

A writer and English teacher originally from London who has lived in Brno since 2011, interested in politics, low culture, and all things strange and/or Czech.
View all posts by Jack Stephens →
« “Meet Brno” Project Helps Newcomers Get To Know The City
A Homegrown Response to the Ecological Crisis: Brno’s Very Own Microgreens »