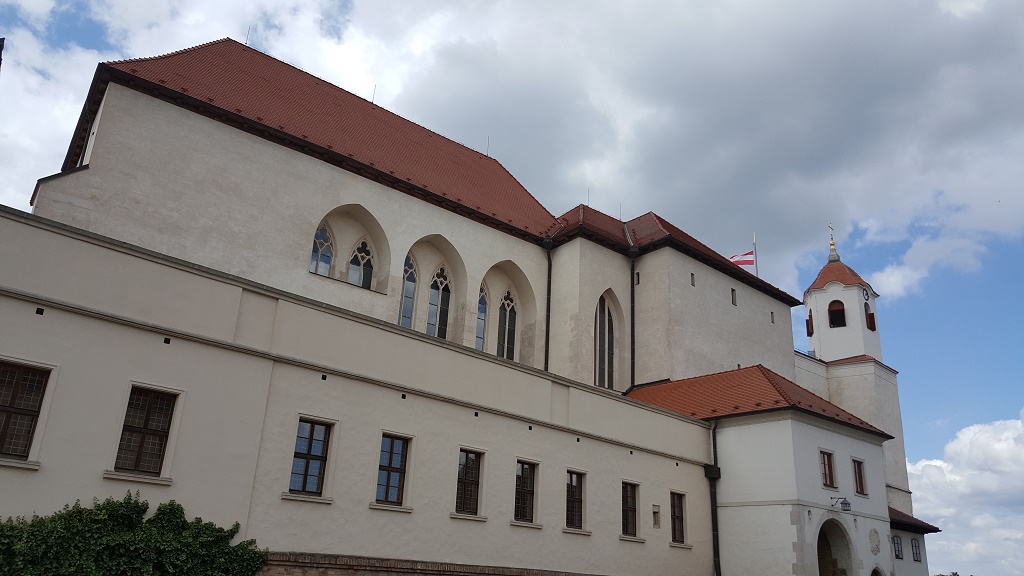 I like Špilberk Castle. I like the way it sits on its own hill above the city. I like its straight lines and the no-nonsense architecture. I like the red roof and the white walls. The former moat is now a lush green lawn. And I especially like the pathways through the park that surround the castle walls.

Špilberk Castle is a unique and powerful symbol of the city of Brno.

Think about it for a moment. What does Špilberk Castle really represent? It looks great now, but — some really bad stuff happened inside. Just look at the historical “highlights”:

• In the 1200s, it was built by Přemysl Otakar II to help with the protection of this area.

• In 1783, Emperor Joseph II made it a prison. Big-time criminals and political prisoners from throughout the Austro-Hungarian Empire were sent there. According to Go To Brno, the tourist site where much of this information is from, “Špilberk was known as the harshest jail in Europe.”

• In the middle of the 1800s, it returned to being a military barracks.

• Then, in the first half of the 1900s, it was back to being a jail again: During World War I, opponents of the Austrian regime were held; during World War II, Czech patriots were imprisoned by the Nazis.

• Finally, in 1962, Špilberk was added to the National Cultural Heritage list.

My point: military installations and prisons are not fun places.

At least the first and last highlights are actually positive. Hooray!

The annual celebration of Brno Day is this weekend. There will be parades and costumes and reenactments of battles. The date is connected to the summer of 1645 when the Swedish army was rebuffed by a stiff Brno defense and the clever ruse to ring the noon bells an hour early. Click here to read “Brno Day Celebrations Coming Up This Weekend” for more information. Click here for “Br(u)no: The Mythology of Brno” and “Br(u)no: Explaining Brno’s Astronomical Clock (to Teenagers)”.

Špilberk Castle will be a major landmark within the celebration, if only because of the statue of Raduit de Souches, the military leader who led the efforts to save Brno.

And it should be. The castle has been repurposed in a positive way. All summer, the national opera has held performances in the central courtyard. Muzeum města Brna (the Brno City Museum), which is located inside, has a Lego exhibit for children young and old. On Aug. 29, BehejBrno.com will have a night run that will wind around and through the castle. There is a cool fifteen-bell carillon. And you can eat ice cream and drink beer in several places.

The fact of the matter is that the main castle-specific touristy thing to do is to explore the Casemates, which, literally, are jail cells.

I’ve done it about half a dozen times with many different visitors. It always strikes me as strange. The plastic, expressionless mannequins are downright frightening. Just imagine the cold, the dampness, the lack of light, the lack of space, the angled wooden slats that served as beds, the spiders, the rats, the smell, the noise.

Imagine the cruelty and the torture and the inhumanity that must have been common.

The names of some of the prisoners are known, although I don’t know many details. Silvio Pellicowas a poet, who apparently angered someone. Václav Babinský was a bandit. Italian Carbonari did something wrong after venturing all the way up here. Baron Franz von der Trenck, an Austrian soldier, is perhaps the most famous prisoner. He sounds like a fascinating personality and he was listed as a bad dude by Tom Sawyer in the Adventures of Huckleberry Finn.

I’m sure none of these prisoners were treated with kid gloves.

Jošt— sometimes written in English as Jobst — represents the medieval history of Brno. He is the battle-ready knight sitting on the long-legged horse on Moravské náměstí. He was the nephew of Karel “Charles Bridge” IV. According to Wikipedia, he was King of the Romans (and just the Pope’s blessing away from becoming Emperor and making Brno the center of the Holy Roman Empire). He was also the Margrave of Lusatia and Brandenburg, the Elector of Brandenburg, the Duke of Luxembourg, the Vicarius of Italy and the Vicarius of the Holy Roman Empire.

As the Margrave of Moravia, he made Špilberk Castle his headquarters. That was when the castle must have been really top notch.

Unfortunately, I have trouble imagining the castle decked out in splendor. It is much easier to image the pain and the torture of dark cells and the expressionless mannequin guards who still stand vigil.

This Thursday (Aug. 20) and next Saturday (Aug. 22), Špilberk Castle will nevertheless be the foundation for special Ignisus Brnensus fireworks displays. They both begin at 10:30 p.m.

And the castle will, no doubt, look spectacular.

Plus, I’ve heard that the Lego exhibition is spell-binding for little kids. Reportedly, there is a cute replica of Špilberk Castle. Looking forward to that.

https://brnodaily.com/2020/08/15/column/bruno-spilberk-castle-is-a-terrifying-place/https://brnodaily.com/wp-content/uploads/2018/11/Spilberk-Castle-1024x576.jpghttps://brnodaily.com/wp-content/uploads/2018/11/Spilberk-Castle-150x84.jpg2020-08-15T08:39:41+02:00Bruno ZalubilColumnBrno,Culture,HistoryPhoto credit: Brno Daily. I like Špilberk Castle. I like the way it sits on its own hill above the city. I like its straight lines and the no-nonsense architecture. I like the red roof and the white walls. The former moat is now a lush green lawn. And I...Bruno ZalubilBruno Zalubilbzalubil@hotmail.comAuthorA connoisseur of the unpredictable and unscripted drama of sports.Brno Daily