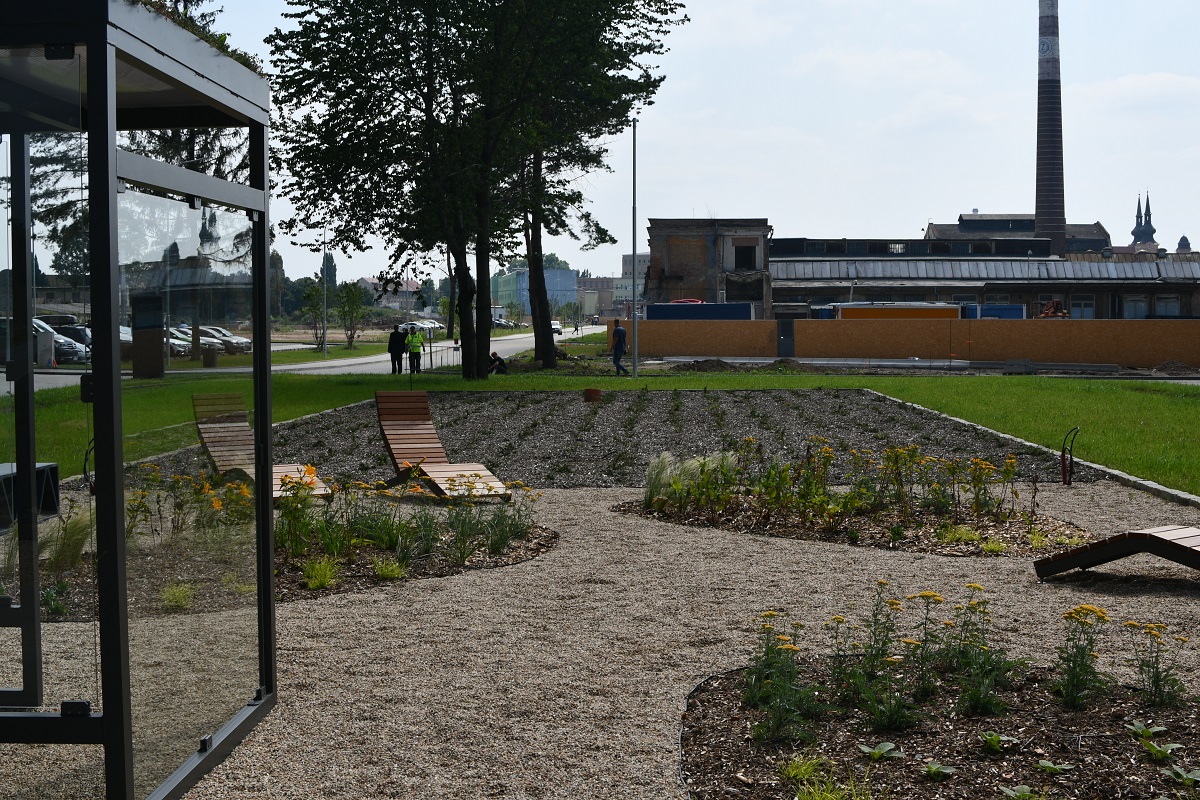 The first tenants are beginning to move in at Nová Zbrojovka, the large-scale brownfield development project in Brno-Zidenice. Previously a huge arms and munitions factory, Nová Zbrojovka will eventually become a mixed-use neighborhood with residential apartment blocks, office space, and amenities. Brno Daily went behind the scenes at the site to see how things are taking shape. Photo credit: TMA / Brno Daily.

Brno, Aug 15 (BD) – Last Thursday, a ribbon-cutting party was held at Nová Zbrojovka, the large brownfield development project in Brno-Zidenice, to celebrate ICT company Axians becoming the first tenants of the recently-completed Zet office building. In a construction project that will take ten years to complete, a new, modern, urban commercial neighborhood will rise around the building, on what is currently mostly rubble, providing thousands of new flats and tens of thousands of square metres of office space.

The evening began with the cutting of a ribbon to formally open the office, with speeches from Deputy Mayor of Brno Tomas Kolacny (Piráti), Mayor of Zidenice Aleš Mrázek (ANO), and the head of Axians Jiří Vytlačil. Kolacny paid tribute to the investor, CPI Property, for a “tremendous job” so far on the project, and commended the plans for retaining several elements of the original industrial architecture. “I think it’s a real shame that from the Svitavy river to the railway, this area has been a wasteland since the production finished, and I’m hoping that this is going to change quite rapidly into a better use for the area,” he added.

Axians began moving into the Zet office last month, following a hunt for new, larger premises for their Brno headquarters. The next tenants, kiwi.com, are scheduled to move into the same building in November. For Shane Crawford-Lann, an executive at Axians, the grand vision of the Nová Zbrojovka development is what set it apart from the other sites considered by the company, as well as the opportunity to be part of something new, innovative and collaborative. He also mentioned the plentiful supply of new office space coming down the line as a big advantage, as it is very difficult for companies like his to predict how much space they will need ten or even five years from now.

As demonstrated in a short presentation on Thursday, Axians develops smart systems for building and facility management, which will also be a key component of Nová Zbrojovka. As such, there is a lot of scope for Axians to collaborate with the developer in this area. According to Miroslav Pekník, managing director of the Nová Zbrojovka project for CPI Property, one such collaboration will be a community app allowing residents and staff to enter buildings and access local amenities via their phones, which Pekník hopes will be developed by Axians.

The office opened on Thursday is merely phase one of a multi-phase project that will eventually see Nová Zbrojovka, previously a huge arms and munitions factory, become a mixed-use neighborhood with residential property, office space, and amenities, including a school, kindergarten, and central shopping area.

The Zbrojovka armaments factory was previously the jewel in Brno’s industrial crown, employing thousands of workers, and branching out into a wide range of other products including computers, bicycles, and engines. Its decline into disrepair in the 1990s was therefore a significant blow for the local economy. To preserve the history of the site, the development plans retain several key buildings, including the iconic chimney in the centre, providing continuity between the site’s industrial legacy and its 21st-century multi-functional character. Everything else will be demolished by the end of 2021, though all the amenities and roads on the site will be constructed from materials recycled from the demolition.

Towering above the surrounding area now as it did before, the chimney will be the main landmark associated with the new district’s downtown area, to be built as part of the next phase of the development. This will be a pleasant, modern, multi-purpose square for use by the whole community, with bars, restaurants cafes, small exhibition or gallery facilities, set around a relaxing green space with gardens, and with easy access to all the other parts of Nová Zbrojovka. Pekník intends for the cooling tower itself to be incorporated into a new brewery located on the square, with a glazed roof and a rooftop garden below providing the most luxurious views in the neighborhood.

The square will be adjacent to a long water feature running the length of the central boulevard of Nova Zbrojovka, which will unify the space. This water feature will have multiple crossings for foot, bicycle and car traffic, and will be connected by tunnel to a bicycle path running through the site. The boulevard will feature cycle lanes and space for cars and buses, as well as more greenery, and will be connected to nearby Tomkovo namesti by a new road. Pekník anticipates that 20,000 cars per day will use the new main road.

At the other end of the site, around one kilometre from the Zet office, a reconstruction of Lazaritní street should bring the main entrance back into operation next year. The original entrance building is another historical element being kept; now used as the CPI Property site headquarters, the company is still using a lot of the original furniture and fittings, much of it manufactured at the site at one time or another, and as such the offices retain a stylish and rather retro look, of which Pekník is quite proud: “Everything in our office is original, only some small reconstruction. We don’t need any more, or any luxury.”

While the factory began a long decline from the 1990s onwards, there is still a Zbrojovka armaments factory at the site, albeit a faint echo of the glory days. There are still four operational underground shooting ranges beneath the factory – “good for teambuilding,” according to Pekník. The whole factory, complete with shooting ranges, will be moved to a new building in the centre of the site, making way for new office buildings running alongside the length of the railway, which will on one hand provide a barrier between the residents and the noise of the trains, and on the other hand comply with Czech hygiene rules which forbid residential properties being built too close to railway lines.

As a consequence, more flats will be situated along the river, with views of Spilberk and Petrov, meaning the asking price per square metre will be higher. However, the city has insisted that the district should contain a certain proportion of social housing to accompany the luxury flats and standard-price apartments.

Social housing was not the only condition placed on the development by the city; according to Pekník, the construction of the school, the kindergarten, all the new roads connecting in and out of the site, and the significant costs of decontaminating the land after decades of industrial use, all fell upon the developer. In his view, this is short-sighted, as higher costs for the construction process will simply equate to more expensive flats on the market.

Another issue is the potential risk involved. The whole development hinges on the adoption of the City of Brno’s new zoning plan, which is scheduled to be passed by the end of the year, and without which no building permits can be obtained. The permit process itself can be an arduous process and can take years – the Czech Republic is ranked 157th globally in the World Bank’s index of countries by speed of planning permission. For a project this size, with a new permits procedure required for each phase, the task is daunting. And at any point, politics could get in the way: “If during an election the whole council is changed, you might have to start again from the beginning. It’s a nightmare,” said Pekník.

Nonetheless, for now everything is proceeding as planned. As well as the central square, the next phase will include 400 flats and 40,000 m.sq of offices, and Pekník subsequently hopes to release around 50,000 m.sq of property onto the market each year, residential and commercial combined. However, the exact mix is flexible, and subject to detailed discussions with the City of Brno. As Pekník put it, “The Brno market is very small, and we know that every year we need about 15-20,000 m.sq of new offices, 400 flats, so the plan is very basic and we can build everything. Of course, it depends on the market, whether the market changes. If there are more flats needed, we will build more flats; if more retail is needed, we will build more retail. We are very flexible in our masterplan.” With plenty to be uncertain about in these times, this flexibility seems crucial. Just as the old Zbrojovka factory continuously adapted its manufacturing capacity to meet demand for different products, so Nová Zbrojovka is in a position to provide what the market needs.

Back in front of the Zet office, the party was continuing with a DJ and food vans, and you could easily imagine this area as a hip and thriving social hub when everyone has moved in. But the view in every other direction is still very much that of a work in progress.

“In November we are planting 226 trees here,” said Pekník, acknowledging the issue. “It will be a small shelter for the people in this building, because of course there will be a lot of demolition here, dust, noise.. but these clients are the first so they are very important! I think they are very brave, starting here with nothing, nowhere to go, so we must treat them well!”

Facebook Comments
https://brnodaily.com/2020/08/15/brno/nova-zbrojovka-brnos-largest-brownfield-development-project-takes-shape-with-first-tenants/https://brnodaily.com/wp-content/uploads/2020/08/buildings-zbrojovka-credit-tma-brnodaily-3-1024x683.jpghttps://brnodaily.com/wp-content/uploads/2020/08/buildings-zbrojovka-credit-tma-brnodaily-3-150x100.jpg2020-08-15T12:20:18+02:00Jack StephensBrnoNewsArchitecture,Brno,Construction,NewsThe first tenants are beginning to move in at Nová Zbrojovka, the large-scale brownfield development project in Brno-Zidenice. Previously a huge arms and munitions factory, Nová Zbrojovka will eventually become a mixed-use neighborhood with residential apartment blocks, office space, and amenities. Brno Daily went behind the scenes at the...Jack Stephens jack.stephens50@gmail.comAuthorA writer and English teacher originally from London who has lived in Brno since 2011, interested in politics, low culture, and all things strange and/or Czech.Brno Daily 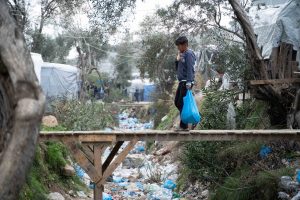 A writer and English teacher originally from London who has lived in Brno since 2011, interested in politics, low culture, and all things strange and/or Czech.
View all posts by Jack Stephens →
« Br(u)no: Špilberk Castle is a Terrifying Place
In Photos: Brno Day 2020 Celebrates The History of Brno »