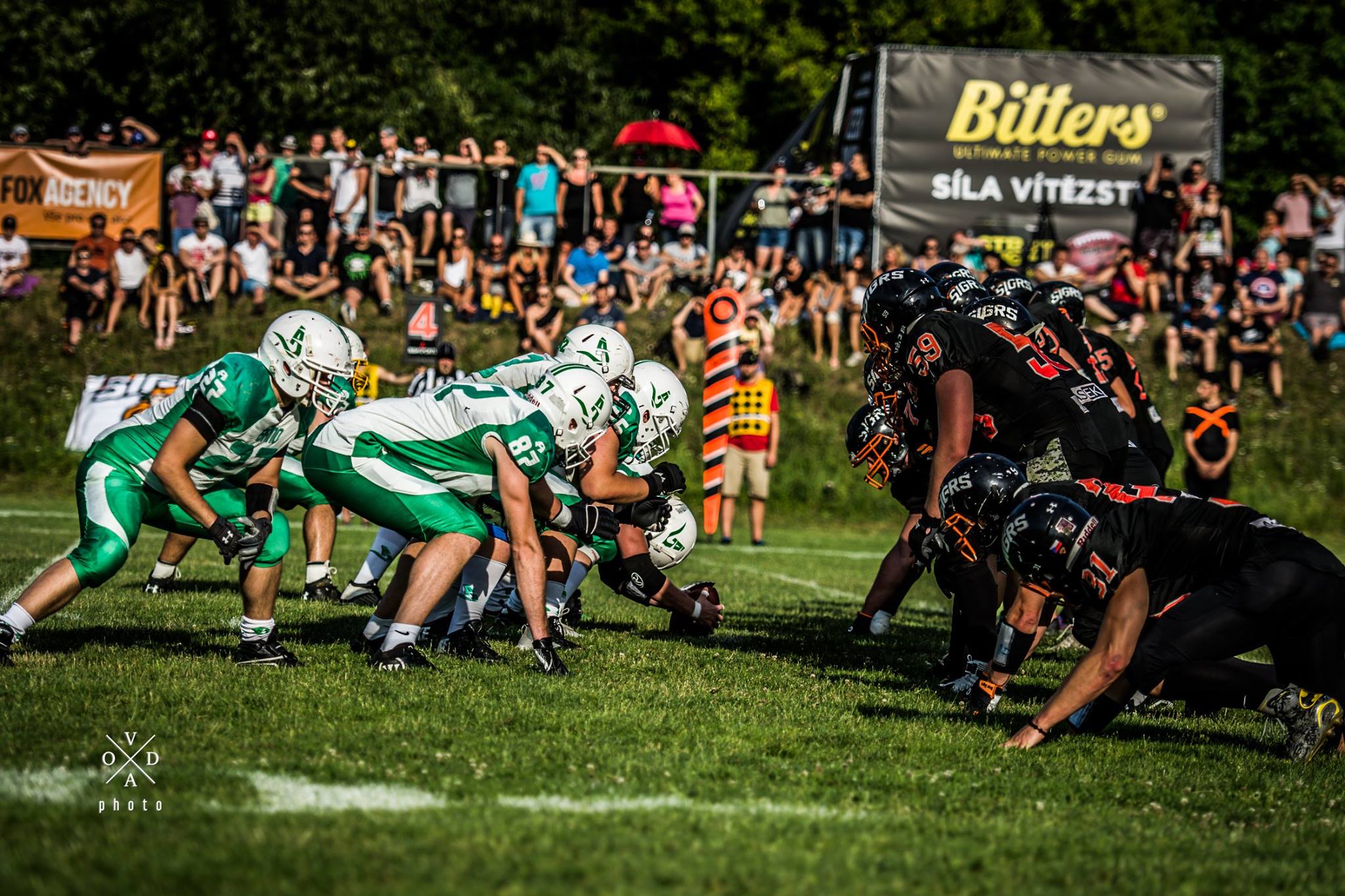 The American Football season may have been delayed by four months, but it starts with a bang this Saturday when the Brno Sígrs and the Brno Alligators square off in another of edition of their continuing rivalry. Photo credit: Brno Alligators.

Alligators X Sígrs this Saturday at 3

American Football in the Czech Republic normally has a spring-summer season. This year, because of the disruption of the coronavirus pandemic, the opening games of the season will be this weekend.

Brno has two teams. Those two teams will start against each other. It’s big time!

The Brno Sígrs and the Brno Alligators, who have known and played against one another for years, will face off on Saturday at 3 p.m. The game is an Alligators home game, so it will be at Ragby Bystrc.

The Sígrs have beaten the Alligators in the previous three meetings. However, anything can happen, and usually does. The 2018 season started with a similar matchup, and the Alligators won on a blocked would-be-winning field goal, and returned it for the winning touchdown as the time ticked off the clock.

The two Brno teams are in the Eastern Division of the Paddock League, along with the Přerov Mammoths and the Ostrava Steelers. The season continues through the middle of October, with the postseason thereafter.

With two weeks left in the Top Six phase of the Czech extraliga baseball season, Draci Brno has effectively taken the top seed for the postseason. The South Brno team is 10-1, with a four-game lead over Kotlářka Praha (6-5) and a 4.5-game lead over Arrows Ostrava (6-6).

The Draci host Cardion Hroši Brno on Friday at 7 p.m. and on Saturday at 2 p.m. The third game of the series will be on Wednesday in Jundrov at 5 p.m.

The Brno Cricket Club Rangers split matches on Sunday in the Czech T20 league. First, they beat the PCC Rooks by a run, while defending 118 runs. Naveed Ahmad, the captain of the Rangers, was named the Man of the Match for his exceptional bowling of five wickets in four overs and giving up only 19 runs.

Then, against the top team in the league, the Rangers lost to PCC Kings by 9 wickets, when defending a score of 102 runs.

The Raiders lost to Bohemian CC.

Both Brno Cricket Club teams play in Prague this weekend: On Saturday, the Raiders are at Vinohrady at 3 p.m. and on Sunday, the Rangers are at Bohemian CC at 11 a.m.

FC Zbrojovka will begin its 2020-21 Fortuna Liga season with, arguably, the biggest game of the season: Sparta Praha at home on Saturday, Aug. 22.

The league schedule was released last week. Sparta, the historically dominant team of the league, will offer bookends to the season, with the Prague game scheduled for the last weekend of May.

In between there are 32 rounds because the league will have a total of 18 teams this year.

The highlights of the fall half of the season are:

Round 5 (tentatively Sept. 26) — at Viktoria Plzeň

There were no on-site fans out of precaution against the spread of the coronavirus. Television was the only option to view the race.

Binder, who rides for Red Bull KTM Factory Racing, won his first MotoGP race. It was just his third MotoGP start. The 24-year-old averaged 153.4 km/h and won in 41 minutes, 38.764 seconds.

Notably, Italian Andrea Dovizioso, who finished 11th, set a record for top speed in Brno when he topped out at 316.7 Km/h.

https://brnodaily.com/2020/08/12/sport/brno-sports-weekly-report-whos-ready-for-some-american-football/https://brnodaily.com/wp-content/uploads/2020/08/Gators_Sigrs-credit-Brno-Alligators-1024x683.jpghttps://brnodaily.com/wp-content/uploads/2020/08/Gators_Sigrs-credit-Brno-Alligators-150x100.jpg2020-08-12T12:13:03+02:00Bruno ZalubilBrnoSportBrno,SportThe American Football season may have been delayed by four months, but it starts with a bang this Saturday when the Brno Sígrs and the Brno Alligators square off in another of edition of their continuing rivalry. Photo credit: Brno Alligators. Brno, Aug. 12 (BD) — Brno rivalry game starts gridiron season; Draci take commanding lead in baseball standings; Brno cricket splits matches in Prague; FC...Bruno ZalubilBruno Zalubilbzalubil@hotmail.comAuthorA connoisseur of the unpredictable and unscripted drama of sports.Brno Daily

A connoisseur of the unpredictable and unscripted drama of sports.
View all posts by Bruno Zalubil →
« Czech Republic Ranked 10th Best OECD Country to Raise a Family
US Secretary of State Mike Pompeo Visits Czech Republic In First Stop Of Central European Tour »