Five Train Accidents In Nine Days Across The Czech Republic 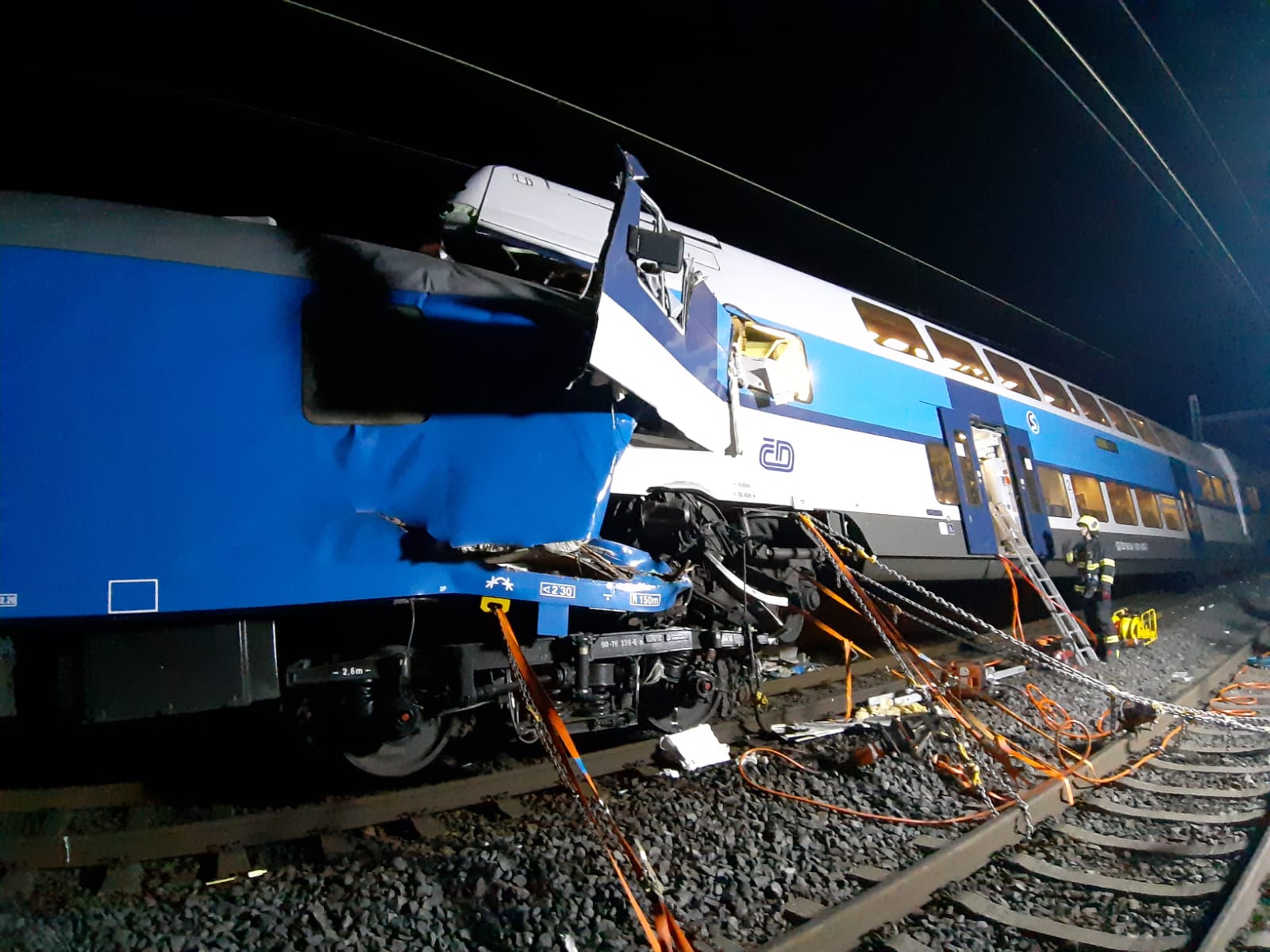 A train crash in Karlovy Vary that killed two people and injured twenty-four was the first in a series of train collisions, which together left three dead and over fifty injured. After a second serious crash near Český Brod, Czech Railways announced improvements to their staff and tracks. Photo credit: HZS CR.

Czech Rep., Jul 17 (BD) – Last week Tuesday, two trains collided in Karlovy Vary, causing two deaths and injuring twenty-four. A couple of days later, on Friday, a train derailed near Prague after colliding with another train, which was followed by another fatal collision near Cesky Brod on Tuesday. On Wednesday morning, a train collided with a van, and that evening, another train derailed near Chrudim. According to the current status of the investigations by the Rail Safety Inspection Office, four of the five accidents were caused by individual human errors.

The first of the series of accidents, on Tuesday, July 7th, was also the most serious, when two passenger trains collided on the Pernink-Nejdek line in the Karlovy Vary region. Two people died in the crash, and twenty-four others were injured. According to preliminary reports by the Rail Safety Inspection Office (DICR), the crash was due to human error, as one of the trains was told to stop and wait for the other to pass, but did not oblige.

The second accident happened three days later, on Friday, July 10th, when a train travelling from Prague to Žďár nad Sázavou collided with a waiting train in Prague-Běchovice, derailing one of the trains. Firefighters had to evacuate hundreds of people, but no one was injured. While the exact cause remains unclear, DICR Inspector Jan Kučera, quoted in iRozhlas, said: “The situation on the ground was complicated. However, it looks at the moment as if it was the fault of a person, perhaps multiple people. The security device worked smoothly and correctly.”

Four days later, on Tuesday, July 14th, there was another severe crash between two trains near Český Brod, on the same line as the previous accident, leading to the death of the driver that allegedly caused the crash, and leaving four passengers with severe injuries and thirty-one with minor injuries. A CityElefant passenger train, travelling from Prague to Řečany nad Labem, crashed into the end wagon of a stationary freight train, got wedged onto the freight car, and derailed. In an interview with Radiožurnál, Transport Minister Karel Havlíček (ANO) said: “The fact is, and it all comes down to this, is that there was a failure of the human factor. Most likely, the driver went through a red light, even though it is a very well-secured line that uses an LS train protection system, which keeps drivers vigilant.” He also said it was a coincidence the two incidents happened on the same line, as they were unrelated in both cause and effect.

The next day, Wednesday, July 15th, there were another two incidents, making a total of five incidents in nine days. In the morning, a passenger train collided with a van near Velké Opatovice in the Blansko region. The accident occurred at a railway crossing secured only by warning signs. In an announcement on their website, the DICR stated that the passenger train derailed due to the collision, and that the driver of the van was the only person injured, with minor injuries. “The incident happened at an unprotected crossing. We assume that the driver of the van did not give priority to the train, as he should have,” said police spokesman Bohumil Malášek, quoted in Blanenský Denik. Police officers are continuing to investigate the circumstances of the accident.

Then, in the evening, in Medlešice in the Chrudim region, a passenger train traveling from Chrudim to Pardubice derailed. No one was injured. The Railway Administration (SŽDC), a state organization, confirmed that the locomotive of the train “cut” the switch and the front axle derailed. The second car and the rear axle of the vehicle remained on the tracks. Marek Illiaš, spokesman for the Railway Administration, quoted in Chrudimský Deník, said: “I don’t want to downplay it, but the derailment of a train is being made into a bigger event than it deserves. In the Czech Republic, we deal with minor train derailments practically every week, for example when shifting.”

The government’s Rail Safety Inspection Office had blamed human error for four out of the five incidents. However, in an interview with Seznam News after the second incident, the President of the Trade Union of Train Drivers of the Czech Republic, Jaroslav Vondrovic, said: “It is not yet clear which side the mistakes came from. According to my information, the drivers [of the first two incidents] did not make any mistakes. And yes, for a number of accidents, the fact that we have no technical security, and the organization of rail transport is managed on the basis of communication between the dispatcher and the driver, is mostly to blame.” Vondrovic added that he had raised this issue before with previous Ministers of Transport, and that the Ministry “has known about the problem for six years but done nothing.”

On Wednesday, two days after the interview and after the third accident, the Board of Directors of Czech Railways agreed that the company would be increasing inspections of train drivers and planned to improve their training, as reported by Seznam News. According to the head of the state carrier, Václav Nebeský, the number of inspections had already increased by a quarter year-on-year.

For single-track regional lines without electronic track security, Czech Railways announced that they would prepare a system to alert drivers that they should report to the signal operator at train crossing points and warn them of vehicles approaching in the opposite direction.

So far this year, there have been a total of thirteen accidents across the country, of which three were train-on-train collisions, five were derailments and four were trains colliding with other kinds of vehicles.

https://brnodaily.com/2020/07/17/news/transport/five-train-accidents-in-nine-days-across-the-czech-republic/https://brnodaily.com/wp-content/uploads/2020/07/cesky-brod-crash-credit-HZS-2-1024x768.jpghttps://brnodaily.com/wp-content/uploads/2020/07/cesky-brod-crash-credit-HZS-2-150x113.jpg2020-07-17T16:34:12+02:00Tessa AdamsonCzech Republic / WorldTransportAccident,Czech Republic,News,TrainA train crash in Karlovy Vary that killed two people and injured twenty-four was the first in a series of train collisions, which together left three dead and over fifty injured. After a second serious crash near Český Brod, Czech Railways announced improvements to their staff and tracks. Photo...Tessa Adamson T.M.Adamson@hotmail.comAuthorExpat student from the Netherlands, passionate about writing, travelling, languages and politics.Brno Daily

Expat student from the Netherlands, passionate about writing, travelling, languages and politics.
View all posts by Tessa Adamson →
« Details Released of Rent Waiver For Non-Residential Tenants of City-Owned Properties
Br(u)no: Putting Brno on the Map »