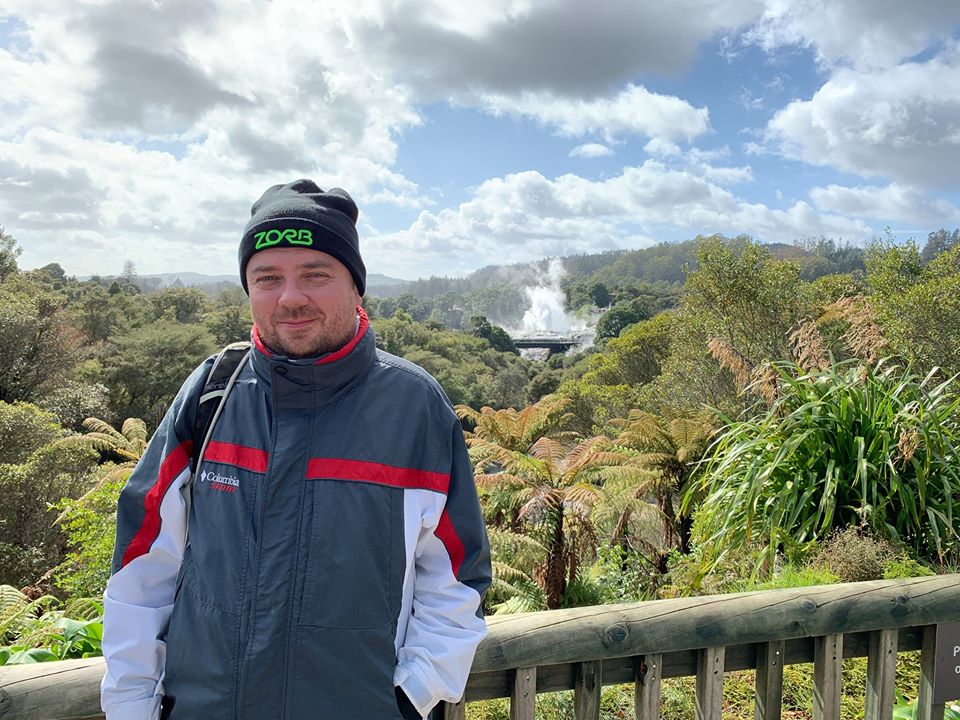 As part of a campaign for the cause of ALS, TV show “One Man Show” has helped a father suffering from ALS complete his bucket list, all captured on film. One part of their journey took place in New Zealand, where they went bungee jumping, rafting, ziplining, ‘zorbing’, and learned the traditional Haka dance. Photo credit: Martin Sliva / Go2 Novy Zeland.

Brno, Apr 7 (BD) – The One Man Show Foundation, the charity arm of the TV show “One Man Show”, has launched a campaign to raise awareness of and money for ALS (Amyotrophic lateral sclerosis, also known as Motor Neurone Disease), in conjunction with ALSA, an American charity dedicated to the condition. A large part of the campaign is a short film about Michal, a father from Olomouc with ALS, in his mission to complete his bucket list. With the help of the show’s host Kazma and the film crew, they set out to complete every item on Michal’s list – to raise awareness and make his dreams come true. At the time of writing, the film has been viewed over 2 million times and close to CZK 6.5 million has been raised.

One of the countries they visited was New Zealand, as Michal had long dreamed of performing the Haka with Maori people, rafting down a waterfall and bungee jumping into a canyon. To make these dreams come true, the crew approached Frank Tomas Grapl Jr., a self-described “CzechoMaor”, who lives in Rotorua, New Zealand, and has previously helped many good causes in the Czech Republic and New Zealand.

Originally, the crew only planned on staying for a few days, but were convinced to stay longer to maximize Michal’s time in New Zealand. While not all of the journey could be included in the final cut of the film, Grapl gave us a detailed account.

One of Michal’s greatest wishes was to learn the traditional Maori Haka dance, and Grapl said he was able to assist with this: “I dance Haka as part of my living and life. So of course I made this possible for Michal, Kazma and Markus Krug (who filmed them) as part of their “One Man Show”. Michal wanted to have the same feeling and energy that we always have among our culture and people when we are doing the Haka. The Haka gives you the power to truly feel your strong spirit and feel free with no worries. Michal wanted to experience this feeling with real Maori people and in the land of New Zealand. The Haka truly makes you feel alive again.”

Although the Haka was the main highlight, they crew also had other activities in mind when they came to New Zealand, so they ended up going ziplining in Rotorua with one of the world’s most beautiful views, rafting at one of the highest commercially-rafted waterfalls, taking a speed boat through the grand canyons on South Island, and bungee jumping off the same canyons. And as a huge fan of The Hobbit and Lord of the Rings, a visit to the Hobbiton movie set was also considered unmissable. Michal also went ‘zorbing’, which is as peculiar a hobby as the name suggests: first invented in New Zealand, ‘zorbing’ involves rolling down a hill in a large transparent ball.

Aside from these exhilarating and undoubtedly exhausting activities, there was also some relaxing downtime. One of the unique New Zealand experiences they enjoyed was a mud bath, which according to Grapl brings visitors to Rotorua from all around the world: “This bath is with natural mud from the geothermal areas of our city, a very well known place called ‘Hell’s Gate’. We spent an hour doing this before enjoying seeing how traditional Maori food is cooked in boiling hot geothermal water. Then we enjoyed the meal.” Besides the mud bath and Maori meal, the team were also privileged to be the first visitors to the spa’s “Secret Spot Hot Tub” before it opened two weeks later.

The crew also got moral support from parliamentary under-secretary of the Ministry of Foreign Affairs Fletcher Tabuteau and Rotorua Mayor Steve Chadwick.

You can watch the full ‘Making Of’ video capturing Michal’s New Zealand experience here, or the finished short film here. Both are in Czech only, without English subtitles.

Amyotrophic Lateral Sclerosis (ALS), also known as Motor Neurone Disease, is a neuromuscular disease that affects the functioning of the muscles, caused by the decay of motor neurons in the spinal cord and the brainstem. As the disease develops, gradually more muscles are affected, except the heart muscle. The malfunctioning of the respiratory muscles is usually the cause of death of an ALS patient. The speed at which this happens varies from person to person, but the average life expectancy after ALS diagnosis is three to five years.

The exact cause of ALS remains unknown, and no medicine exists that can either stop or cure the disease. One medicine has been shown to slow the disease, prolonging a patient’s life by approximately 3 to 6 months.

If you want to support the One Man Show Foundation in their fight against ALS, you can watch the OMS videos here, or make a donation to the foundation here.

https://brnodaily.com/2020/04/07/news/one-man-show-helps-als-patient-complete-bucket-list/https://brnodaily.com/wp-content/uploads/2020/04/OMS-Foundation-Credit-Martin-Sliva-Go2-Novy-Zeland-14.jpghttps://brnodaily.com/wp-content/uploads/2020/04/OMS-Foundation-Credit-Martin-Sliva-Go2-Novy-Zeland-14-150x113.jpg2020-04-08T09:12:40+02:00Tessa AdamsonCzech Republic / WorldCharity,Czech RepublicAs part of a campaign for the cause of ALS, TV show “One Man Show” has helped a father suffering from ALS complete his bucket list, all captured on film. One part of their journey took place in New Zealand, where they went bungee jumping, rafting, ziplining, ‘zorbing’, and...Tessa Adamson T.M.Adamson@hotmail.comAuthorExpat student from the Netherlands, passionate about writing, travelling, languages and politics.Brno Daily