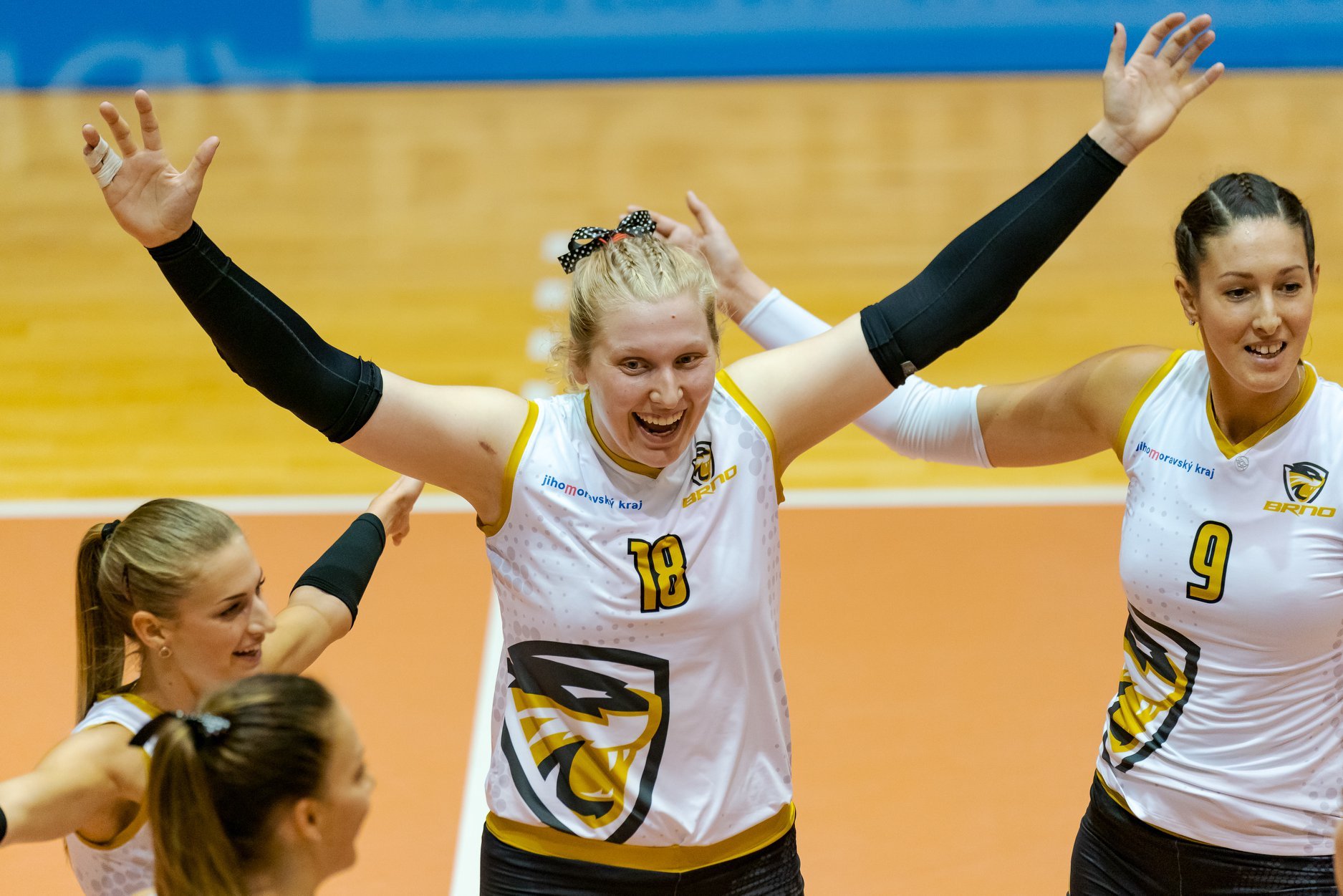 VK Šelmy Brno have two matches ahead in the next five days. They host Olomouc on Monday in a match that will be on CT Sport. Photo credit: Viktor Šulc.

VK Šelmy Brno have a slim two-point lead at the Uniqua Extraliga Ženy standings and they will have to fight this week to maintain it. On Thursday, they host last-place Přerov at 6:30 p.m. Then, on Monday, Olomouc, the No. 2 team in the league, will come to Brno for a 7:30 p.m. match that will be broadcast on national television.

VK Královo Pole (17), which lost to Olomouc then VK Brno in its past two matches, goes to Liberec on Saturday.

Brno added another victory to the year 2020 when they went to second-place České Budějovice and won in a five-set match on Saturday.

Earlier in the week, they won at Klado in four sets.

Karlovarsko is out in front in the Uniqua Extraliga Muzi standings with 39 points. Then, it gets tight. Liberec and České Budějovice both have 30 and Brno is just a tick back in fourth with 29.

Volejbal Brno will host Liberec this Saturday at 6 p.m.

The Brno women’s basketball teams will meet twice over the next two weeks.

First, this Saturday, KP Brno will face Žabiny Brno on Saturday at 2 p.m. in the first semifinal game of the Czech Cup in Kutná Hora. Slavia Prague faces Hradec Kralove at 5 p.m. in the other semifinal. The next day will have the third-place game at 2 p.m. and the title game at 5 p.m.

KP Brno, which built up a lot of recent experience in the competitive EuroCup games, faced Hradec Králové in the finals of the past two Czech Cups, winning in 2017-18 and finishing second last year.

As usual, mmcité1 Basket Brno continues to show signs of life with periods of outstanding play, but the end result continues to be a disappointment. Last week the Brno men’s basketball team dropped to the bottom of the Kooperative NBL standings when they lost at home to NH Ostrava, 83-85, on Wednesday and at BK Opava, 83-68, on Saturday.

Brno will be in Group A2. They will play the other teams in the bottom four, which will be NH Ostrava (5-15), GEOSAN Kolín (4-16) and Kingspan Královští. After home and away games among the Group A2 teams, the bottom team will play the top two teams from the lower league for the right to stay among the elite clubs. From April 10 to 14, the other teams of Group A2 will play for the chance to enter the playoffs, which will have several levels from April 17 to May 30.

Brno was close throughout the home game against Ostrava, but it could not get over the top. Jakub Krakovič had his best game in his month with the team, scoring 22 points and grabbing nine rebounds.

In the game at Opava, Brno scored 24 points in the first 4:12 of play and led 33-31 after the first quarter, largely because of nine 3-pointers. But they could not maintain their scoring nor play consistent defense. Then, the scoring slowed for both teams and Brno, which, because of injuries, needed an exhausting 34:39 minutes from Krakovič under the basket, was barely able to double that first-quarter total and lost by 15 points.

“From our side, we got a great, quick lead, but that was all we offered today,” said Brno coach Lubomír Růžička. “We have a lot of injuries, so we played in close rotation and we ran out of power.”

HC Kometa split its games for a second week and maintained its postseason-bound position in the standings when Martin Zaťovič notched a hat-trick in a 5-2 victory over third-place Plzeň in front of the home crowd on Sunday.

Brno will try to capitalize on the momentum when they play Friday at HC Dynamo Pardubice, then return for home games on Sunday against HC Verva Litvínov at 3 p.m. and Tuesday against HC Oceláři Třinec at 6 p.m.

Last Friday, Kometa traveled to play the Rytíři in Kladno and, after a competitive game that remained scoreless for the first 48 minutes, gave up five goals. Tomáš Plekanec, a Klado native, scored the only Brno goal.

On Sunday against HC Škoda Plzeň, Kometa scored three goals in the first period. Zaťovič scored a goal in each period.

“The first period was excellent from our side,” Kamil Pokorný, a coach of the team, said about Brno’s 3-1 first-period lead. “We wanted to atone for two unsuccessful away matches.”

HC Kometa are sixth in the Tipsport extraliga with 62 points. They have an eight-point lead on Zlín and Hradec Králové, who are tied for eighth at the cut for teams who make the postseason. There are 14 games left in the regular season, which ends in the first week of March.

The schedule for the Czech extraliga baseball season has been released and all three Brno teams will start play on Opening Day, Thursday, April 4.

In fact, the top two Brno teams will play each other: Draci Brno will host Cardion Hroši Brno at 7 p.m. on Opening Day. At the same time, Technika Brno will travel to two-time defending champion Arrows Ostrava.

The first part of the season continues into June.

https://brnodaily.com/2020/01/22/sport/brno-sports-weekly-report-vk-selmy-brno-face-more-challenges-for-top-spot/https://brnodaily.com/wp-content/uploads/2020/01/Selmy220120-1024x683.jpghttps://brnodaily.com/wp-content/uploads/2020/01/Selmy220120-150x100.jpg2020-01-22T11:03:46+01:00Bruno ZalubilSportBasketball,Kometa,News,SportVK Šelmy Brno have two matches ahead in the next five days. They host Olomouc on Monday in a match that will be on CT Sport. Photo credit: Viktor Šulc. Brno, Jan 22 (BD) — Volejbal Brno wins again; Brno women’s hoops teams to meet in the Czech Cup Final...Bruno ZalubilBruno Zalubilbzalubil@hotmail.comAuthorA connoisseur of the unpredictable and unscripted drama of sports.Brno Daily

A connoisseur of the unpredictable and unscripted drama of sports.
View all posts by Bruno Zalubil →
« In Photos: Visualisations of the New Tesco Complex near Hlavni Nadrazi
Mattoni and E-Košík.cz To Trial Deposit System For PET Bottles »