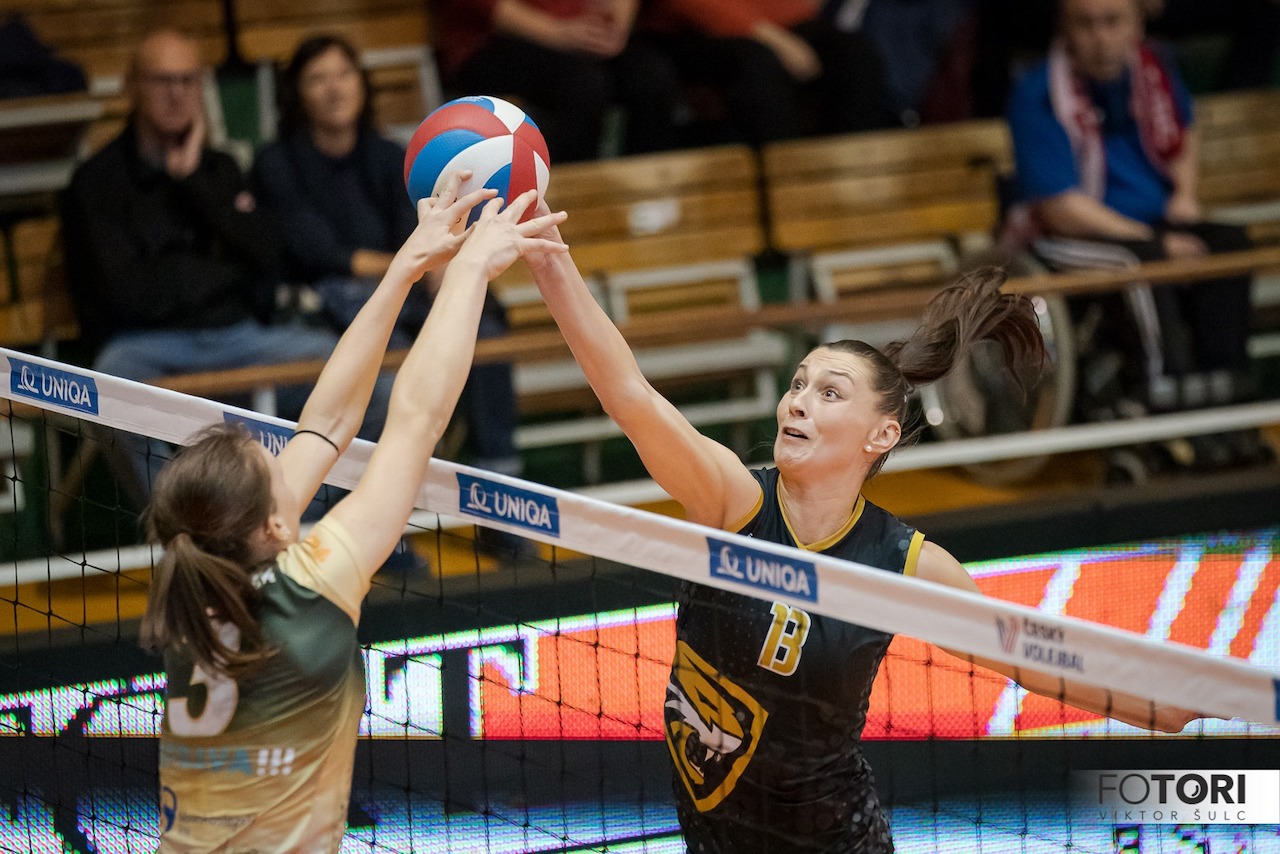 The Brno Šelmy are the No. 1 team in women’s volleyball. Photo credit: Viktor Šulc.

VK Brno pulled ahead of their nearest rival last Saturday in the Uniqua Extraliga Ženy standings. This Saturday they can extend the gap.

The VK Brno Šelmy have 41 points after beating third-place Prostějov in four sets.

Second-place Olomouc, which lost at home to Liberec last week and dropped four points back, will come to Brno this Saturday. The match starts at 6:30 p.m.

Ostrava has 30 points. Prostějov and Olymp both have 27 points.

Královo Pole, which is in seventh place with 17 points, came out on top of a five-set match against visiting Frýdek-Místek on Thursday. The previous week, they failed to move up in the standings when they lost a five-set match at Ostrava. Královo Pole plays at Liberec on Saturday.

After this weekend, the women’s league takes a break until the first week of January.

VB Brno, the men’s team, jumped into a four-way tie for third place in the Uniqua Extraliga Muzi standings when they beat Příbram on Monday in a match that was on national television.

The match appeared to be going to a fifth set, but Příbram was penalized several points because of what appeared to be a substitution violation. When play resumed, with the score 21-21 instead of Brno trailing, the Brnoans were able to get the win.

Brno has 21 points, along with Liberec, Praha and Kladno. Brno has one match — at home against Beskydy on Saturday at 4 p.m. — before a three-week pause. The season will resume with Brno at Kladno on Jan. 13 in a match that will be nationally televised.

Everything came together for mmcité1 Basket Brno in the waning moments of their game against third-place BK JIP Pardubice on Saturday: Davell Roby drove the lane several times in order to score and/or hit free throws; the defense was able to disrupt Pardubice’s 3-point shots; Jakub Krakovič made three excellent low post moves, including a rebound putback to give Brno the lead with 2:37 remaining; Bryan Smithson hit several 3-pointers; and, with nine seconds remaining, Lukas Stegbauer put the game out of reach with two free throws.

It all put the finishing touches on an 80-75 victory. It was the second win in four days and it moved Brno to 10th place in the 12-team Kooperative NBL.

Brno (2-12) will now play Dekstone Tuři Svitavy (9-5), which jumped over Pardubice in third place, this Saturday. The game starts at 6 p.m.

“I am glad that the boys have changed their mentality,” said Brno head coach Lubomír Růžička. “Even if we are losing by eight, we still have life.”

Before the calendar flips, Brno will travel to GEOSAN Kolín (2-12) on Dec. 29 and then host eighth-place BK ARMEX Děčín (6-8) on Jan. 4 in what could be the biggest game of the season.

If Brno can keep the momentum moving, it could start 2020 in ninth place. Not bad for a team that lost against each team in the league and Ústí nad Labem twice in the first 12 rounds. There is even an outside chance that the team could move even further into the middle of the standings in the remaining eight rounds of the first part of the regular season.

If they were to pass Děčín, Brno would return to Group A1 for the second phase of the regular season and be guaranteed another year in the top league. Last year was the first that they played in that more-competitive group.

On Wednesday, mmcité1 Basket Brno beat USK Praha, 94-82, for its first win of the season. Roby and Smithson, two American players, both had 19 points. Jakub Jokl, a center, was a perfect 8-for-8 from the field as he totaled a season-high 17 points and a season-high-equaling eight rebounds. Radek Farský hit four 3-pointers and four free throws for 16 points; he also had a team-high nine rebounds.

“A lot of guys today showed that they can play good basketball,” Růžička said after the game. “We had 24 assists, we were great in rebounds where we had 10 more (than Prague), and we had 14 offensive rebounds. I want to commend not only all the players, but also the bench because everyone felt that the win could come.”

Watching both Brno teams play on TVcom.cz last Saturday offered a perfect example of how KP Brno and Žabiny Brno are among the top teams of the Renomia ŽBL. Both dominated their opponents with solid all-around basketball.

KP Brno pulled away in the third quarter to beat host BLK Slavia Praha, 64-88. The Žabiny Brno defense made the difference as they took a solid lead in the second quarter en route to, 86-65, victory against visiting SBŠ Ostrava.

Michaela Stará led KP Brno with a season-high 20. It was the second time in three league games that she hit for 20. Sarah Beránková was solid from the floor, going 3-for-4 from 2-point range and 4-for-6 from 3-point range for a personal season-high 18 points.

The Žabiny Brno offense was spread out in its home victory over Ostrava. All 11 players who took the floor scored.

On Sunday, Žabiny again beat SBŠ Ostrava, this time 88-66 in a CEWL game.

The league has completed 12 rounds. There are six left before the league splits into two groups, with the top team, probably longtime dominant team USK Praha, guaranteed the No. 1 seed in the playoffs. Group A will have home and away games for the second-, third-, fourth- and fifth-place teams. Group B has a five-round system for the sixth-, seventh-, eighth-, ninth- and 10th-place teams to determine the teams that will stay in the top league; in other words, it will determine the team that will have to play the top team from the second league to avoid relegation.

Žabiny Brno (6-6) is in fifth place and not exactly guaranteed a spot in Group A. They will resume play in the new year earlier than most of the rest of the league when they travel to sixth-place DSK Levhartice Chomutov (6-6) on Jan. 3. Žabiny will then host seventh-place Loko Trutnov (3-9) on Jan. 18 at 5 p.m.

Peter Mueller is back. Tomas Vincour is back. Martin Erat will soon appear. And, on Monday, HC Kometa beat host Oceláři Třinec, 1-4.

Things are definitely looking up.

The team plays at HC Verva Litvínov today and BK Mladá Boleslav on Sunday. They finally get a home game on Dec. 26 when they host HC Sparta Praha on live television.

Kometa is in sixth place in the Tipsport extraliga standings with 44 points. They are still squarely in playoff contention.

The regular season continues into March. The final game is at home against HC Dynamo Pardubice on March 6, which will be four games against each team in the league.

The schedule for various Brno professional and recreational sports for the next three weeks. All dates and times subject to change. Home team listed first (when applicable).

A connoisseur of the unpredictable and unscripted drama of sports.
View all posts by Bruno Zalubil →
« Brno Main Station Reopens With Alterations To Timetables and Ticketing System, But Without a Waiting Room
Changes to Public Transport Over Christmas Holidays »