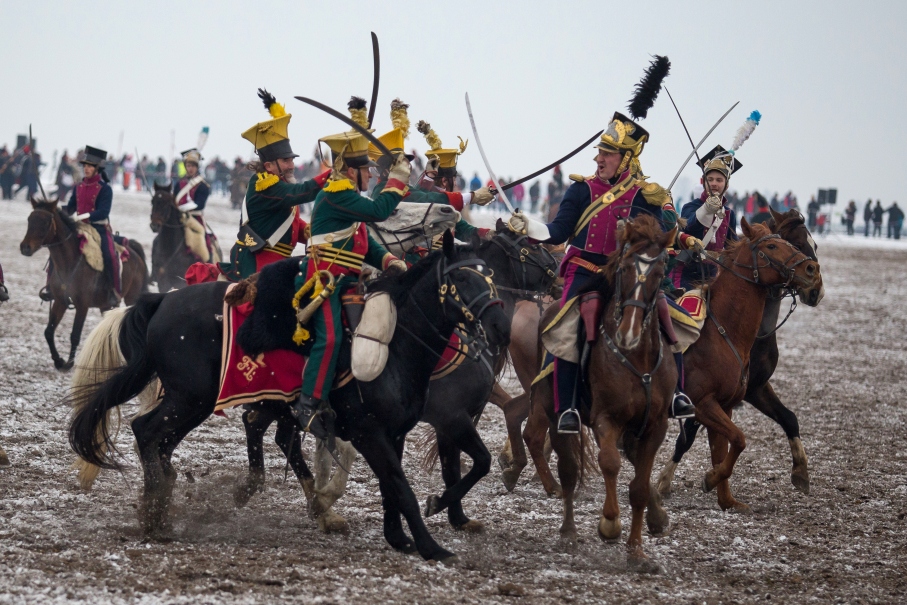 The Battle of Austerlitz will be re-enacted on Saturday just a few kilometers east of Brno. Photo credit: Jaroslav Švanda, with permission of AusterlitzPro s.r.o.

Some people are obsessed with athletes. Others worship singers or movie stars. Many are over-the-top fans of Star Wars or Star Trek.

From his youth and all the way through his adult years, he has loved everything about the legendary French military leader.

This weekend, Schneider, an American from Virginia, will return to the Brno area in order to lead the French troops onto the field of battle as they recreate one of the most important battles in the history of the world: the Battle of Austerlitz.

Schneider plays the role of Napoleon, complete with uniform, horse and French commands.

If you have never been to watch the reenactment, then you are missing out.

Many events to commemorative this 214th anniversary of the battle will be held today, Saturday and Sunday. The actual reenactment of the battle will be under the Santon Hill at 2 p.m. (just south of the town of Tvarožna). It will include about 1,000 uniformed participants, 60 horses and 15 cannons.

Tickets are available to sit in the tribune. Otherwise, entrance is free.

Click here for more information about the overall program and a detailed map, in English.

Schneider took the time this week to answer some questions about his role as Napoleon.

Where do you live? What do you do for a living?

I live in Williamsburg, Virginia, where I work at the largest Living History museum in the world. [The website is: www.history.org] The name of the museum is Colonial Williamsburg and we tell the story of Williamsburg, before, during and after the American Revolution (1775-1783.) I work for the Education Division of Colonial Williamsburg where I am part of the “Nation Builder” department. In this department we take on the roles of people from the past, theatrically, in formal presentations. I typically portray the Marquis de Lafayette but also portray other characters connected with Williamsburg’s past. When portraying these various characters we have authentic reproduction costumes and props and an 18th century city to work out of. We ride horses and have period carriages, livestock, tradesmen and a fife and drum corps. It brings the 18th century to life.

Where did you first learn about Napoleon?

I first learned about Napoleon at a very young age. My mother is French and my father American. When I was a little boy, my French cousin came to visit and brought me some 54mm toy soldiers from France. One was Napoleon and the others his Imperial Guard. That changed me forever. My mother often said that she did not know a time when I was not interested in Napoleon.

I have continued to be fascinated with everything Napoleon ever since.

The reenactment of Austerlitz . . . I first participated in 2005. It was for the 200th anniversary. It was truly a great honor and privilege.

How long have you portrayed Napoleon at the Battle of Austerlitz and elsewhere?

I have portrayed Napoleon in Europe since 2005 but have portrayed him in the United States since 1998. Prior to my European appearances as Napoleon, I portrayed Napoleon at historical reenactments, documentaries in film and the 200th anniversary of the Louisiana Purchase in New Orleans, Louisiana. This was for the New Orleans Museum of Art. This lead to appearances at the French Embassy in Washington DC and other locations.

How do you approach your part in the Battle of Austerlitz — Are you an actor performing a role? Are a soldier paying homage? Are you an educator trying to bring history to life?

I approach my role for Austerlitz as a historian. That is most important. We must teach the history of the past, so that we can be better citizens of the future. All the answers to the future can be found in the past, if we simply know our history. Education is so very important in what we do with reenactments.

I am certainly an actor playing a role but I am more than that. I am a veteran of the United States Army who is paying homage to those that fought and died and honor their countrymen in this epic struggle.

What makes you a successful Napoleon?

What makes me a successful Napoleon is my love of history. I love telling the story of this amazing man and his times. I have been fascinated with Napoleon my whole life and I hope this fascination is contagious.

The reality is that I am surrounded with amazing people who help me tell this story. People like Cristina Barreto Lancaster, Martin Lancaster, Andrea Puleo, Jakub Samek, Christopher Oiseau, Jean-Francois Remy-Neris and so many others. It is most certainly a team effort.

Why should locals in Brno go to an open field on a cold day to experience this event?

The most important reason your readers should come the anniversary of Austerlitz is to learn from history. Though it is on a small scale compared to the actual battle, by coming to this event you will be getting a glimpse into one of the greatest battles in history — a victory that was considered Napoleon’s greatest victory. In coming to this event, you will not only learn about what happened on this epic day, but also honor those that fought and died for what they believed. No matter what side you prefer, we can honor the dead and those that fought in this great struggle.

https://brnodaily.com/2019/11/28/column/bruno-talking-to-napoleon/https://brnodaily.com/wp-content/uploads/2019/11/Austerlitz291119.jpghttps://brnodaily.com/wp-content/uploads/2019/11/Austerlitz291119-150x100.jpg2019-11-28T11:34:31+01:00Bruno ZalubilColumnBrno,Brno Expats,Events in Brno,History,Things To Do in BrnoThe Battle of Austerlitz will be re-enacted on Saturday just a few kilometers east of Brno. Photo credit: Jaroslav Švanda, with permission of AusterlitzPro s.r.o. Some people are obsessed with athletes. Others worship singers or movie stars. Many are over-the-top fans of Star Wars or Star Trek. Mark Schneider is a...Bruno ZalubilBruno Zalubilbzalubil@hotmail.comAuthorA connoisseur of the unpredictable and unscripted drama of sports.Brno Daily

Brno, Brno Expats, Events in Brno, History, Things To Do in Brno

A connoisseur of the unpredictable and unscripted drama of sports.
View all posts by Bruno Zalubil →
« In Brief: Renovation Complete of Second Of “Three Brno Skyscrapers”
In Photos: Skating Under Jošt »