No Need To Prohibit Mobile Phones In Schools, According to Researchers From Masaryk University 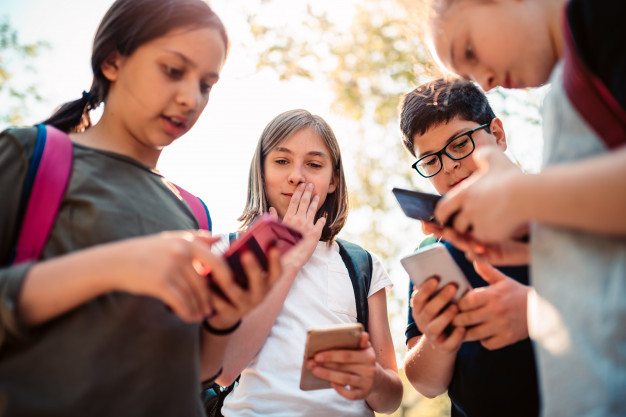 According to researchers from the Faculty of Social Studies of Masaryk University, allowing mobile phones during breaks does not cause problematic behaviour in children. Photo: Stock picture / Freepik.

Brno, Nov 21 (BD) – “The adolescents in our research group talked to classmates during the break, whether or not they were allowed to use their mobile phones,” said David Šmahel, head of the research team, presenting the main findings of the study.

Researchers collected empirical data from April to June 2019 at 32 primary and secondary schools in South Moravia. Some of them prohibit phones, and the others let students use their phones freely.

According to the research, 93% of children talk to their schoolmates during break, and more than half use the time to prepare for the upcoming class. However, half of the children also use mobile phones or tablets. They also use the breaks to do physical activities such as outdoor games, read books and magazines, or simply sit and relax.

The most common adolescent online activity was scrolling through social networks. The second was communication with family and friends. Pupils also use the Internet for searching for information for school or reading news. Boys spend more time playing online games than girls.

Proponents of the ban on the use of mobile phones argue that when children and adolescents are always with mobile in hand, they communicate less with their classmates and generally socialise less. Opponents of the ban, on the other hand, believe that interacting with the world through the phone is an important part in the development of personality and, moreover, the ban is an infringement of users’ rights.

The study concludes that neither prohibition or permission are related to problems of concentration in classes or fatigue after a break. On the basis of the research, the ban on mobile phones during breaks is not necessary.

“We found that allowing or banning mobile phones during a break does not increase or decrease the time spent on the Internet over the week, nor is it related to excessive use of the Internet,” added Nikol Kvardová, lead author of the study.

The consequences of the ban on mobile technology during breaks has not yet been sufficiently investigated in the Czech Republic or abroad.

https://brnodaily.com/2019/11/21/news/no-need-to-prohibit-mobile-phones-in-schools-according-to-researchers-from-masaryk-university/https://brnodaily.com/wp-content/uploads/2019/11/kids-playing-video-games-smart-phone-after-school_137573-546.jpghttps://brnodaily.com/wp-content/uploads/2019/11/kids-playing-video-games-smart-phone-after-school_137573-546-150x100.jpg2019-11-21T09:46:19+01:00Kamila JablonickáCzech Republic / WorldBrno,Czech Republic,News,StudentsAccording to researchers from the Faculty of Social Studies of Masaryk University, allowing mobile phones during breaks does not cause problematic behaviour in children. Photo: Stock picture / Freepik. Brno, Nov 21 (BD) – “The adolescents in our research group talked to classmates during the break, whether or not...Kamila JablonickáKamila Jablonickák.jablonicka@seznam.czAuthorA student of journalism and international relations, mainly interested in current topics, but also in media, culture and its impact on our lives.Brno Daily

A student of journalism and international relations, mainly interested in current topics, but also in media, culture and its impact on our lives.
View all posts by Kamila Jablonická →
« In Brief: Thief Drills Into The Tank of a Stranger’s Car for a Few Drops of Gasoline
City of Brno Acquires Land For New Multifunctional Complex In Pisárky »