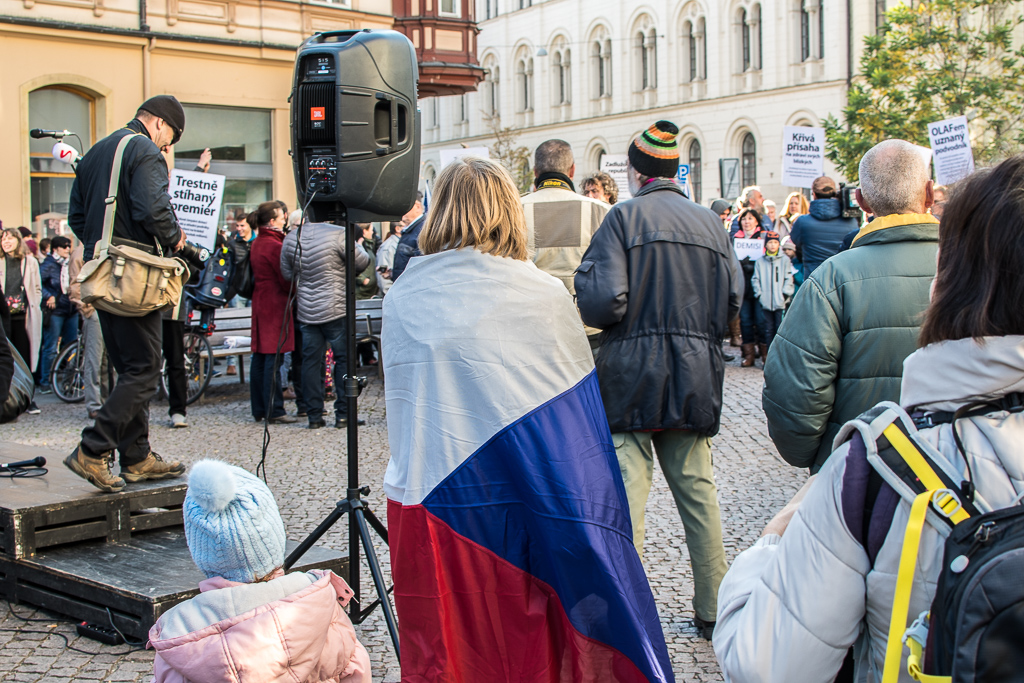 Yesterday around 250,000 Czechs gathered at Letná in Prague to protest against the government of Andrej Babiš. Both the location and the date were symbolic, bringing to mind the huge protests of 30 years ago that were the beginning of the end for Communist one-party rule in Czechoslovakia. Protests continue today across the rest of the country. In this article, Brno Daily looks back at the events of early winter 1989. Photo: Protests in Brno, November 2018. Credit: CG.

Brno, Nov 17 (BD) – 30 years ago today saw the beginning of the Velvet Revolution in Czechoslovakia, five weeks of dramatic political change that swept away the 41-year one-party rule of the Communist Party of Czechoslovakia, and installed dissident playwright Václav Havel as President in its place. The events of early winter 1989 are remembered around the world, with footage of Havel addressing crowds from a balcony in Wenceslas Square ranking alongside the fall of the Berlin Wall as one of the defining images of the era, heralding the end of the Cold War and a new period of optimism.

1989 was a year of growing political tension in Czechoslovakia. Political reforms in the Soviet Union instituted by leader Mikhail Gorbachev in 1985 had galvanised calls for reform across the Eastern Bloc, and a protest movement that emerged in response to Václav Havel’s imprisonment in January 1989 was attracting increasing support from prominent figures and students within Czechoslovakia, amid falling standards of living and a period of economic stagnation. Autumn 1989 saw Communism governments ousted in Poland, Hungary, and Bulgaria, and events culminated with the fall of the Berlin Wall on November 9th.

In the context of this period of change, the youth wing of the Communist Party, many of whom were pro-reform, organised a march in Prague to mark International Students Day, on the 50th anniversary of the Nazi occupation of Czechoslovakia’s universities. The youth movement Stuha, an alternative to the state-sanctioned youth organisations, led a breakaway march into the centre of Prague, away from the official event, accompanied by around 15,000 demonstrators. Around 7:30pm, on Narodní in Prague City Centre, the march came up against riot police, who prevented the marchers from leaving the area and launched a violent attack. Several people were injured, and amid the confusion a rumour (later determined to be false) spread that one student had been killed.

The next day, in response to the police violence, students from Prague’s Academy of Performing Arts and actors from several Prague theatres announced a strike, quickly joined by students and actors across the country. By November 19th, prominent Slovak public figures met in Bratislava to form Public Against Violence, a popular front to call for wide ranging reforms. The same day, Czech public figures including Havel met to form Civic Forum, a Czech counterpart organisation. The groups called for the resignation of the government. Both groups would subsequently take first place in their respective countries’ first democratic elections in June 1990.

There followed several days of tension as the conservative factions among the Communist party lost control of events, leading to the resignation of the entire Communist leadership on November 24th, loosening censorship of media, and culminating in a general strike on November 27th, supported by an estimated 75% of the Czechoslovak population. On November 29th, the Federal Assembly amended the constitution to remove reference to the “leading role” of the Communist Party. On December 10th, President Gustáv Husák appointed a new, primarily non-Communist government led by Slovak Reform Communist Marián Čalfa. In this mostly bloodless manner, 41 years of Communist one-party rule came to an end, hence the name “Velvet Revolution” (or “Gentle Revolution” in Slovak).

On December 29th, the Federal Assembly elected Havel, a dissident playwright who had only left prison seven months earlier, as the new Czechoslovak President, cementing his reputation as an international symbol of non-violent resistance and ushering in a new era of democracy.

After the revolution, events continued to move quickly; Soviet troops left Czechoslovak territory within weeks, June 1990 saw the first democratic elections in the country since 1946, and the Czechs and Slovaks were split into two separate republics from the beginning of 1993. The Czech economy was rapidly opened to foreign investment and free-market capitalism under Prime Minister Václav Klaus, while his Slovak counterpart Vladimir Mečiar took Slovakia in an autocratic direction characterised by state corruption and links to organised crime.

30 years later, the Velvet Revolution and its legacy are the source of continued discussion. Both the Czech and Slovak Republics have seen enormous cultural, economic, and political change, but problems with endemic corruption and democratic disillusionment persist. The post-revolution era has seen mass privatisation of state assets that many consider were undervalued, and the ensuing economic transition created a class of mega-rich business figures who have acquired great power within various industries, and who critics compare to the “oligarchs” familiar from many post-communist countries. Many Czechs and Slovaks are disillusioned with both the pace of change, and the results of the shift to liberal democracy, to the extent that many believe that life was in fact better before the revolution. Both countries have seen their biggest protests since the revolution in the last two years.

Read more in our previous articles:
“30 Years On, More Than A Third Of Czechs Over 40 Think Life Was Better Before The Velvet Revolution”
“Large Protest of Up To 500,000 People Planned For Prague’s Letná Park This Sunday”
“Large Protests Planned Across Slovakia On Friday In Response To Continuing Corruption Revelations”

Yesterday saw another large protest in Letná, with an estimated 257,000 [according to data from mobile operators] returning to the scene of 1989’s largest demonstration to protest against the government of Prime Minister Andrej Babiš, accused by protesters of a range of political, financial, and environmental misdemeanours.

Today, the protests will spread throughout the country, combining anti-government demonstrations with commemorative events for the anniversary. In the minds of many Czechs, the democratic transition is incomplete, and even at risk of reversal, making the anniversary a bittersweet one.

https://brnodaily.com/2019/11/17/news/politics/memorial-events-and-protests-across-czech-republic-to-mark-30th-anniversary-of-the-velvet-revolution/https://brnodaily.com/wp-content/uploads/2018/11/D75_1201-1024x683.jpghttps://brnodaily.com/wp-content/uploads/2018/11/D75_1201-150x100.jpg2019-11-17T14:18:26+01:00Jack StephensCzech Republic / WorldPoliticsczech,Czech Republic,Protest,RevolutionYesterday around 250,000 Czechs gathered at Letná in Prague to protest against the government of Andrej Babiš. Both the location and the date were symbolic, bringing to mind the huge protests of 30 years ago that were the beginning of the end for Communist one-party rule in Czechoslovakia. Protests...Jack Stephens jack.stephens50@gmail.comAuthorA writer and English teacher originally from London who has lived in Brno since 2011, interested in politics, low culture, and all things strange and/or Czech.Brno Daily

A writer and English teacher originally from London who has lived in Brno since 2011, interested in politics, low culture, and all things strange and/or Czech.
View all posts by Jack Stephens →
« Active Brno: Don’t Let Cold Keep You Inside
What’s Up Brno? – Events in Brno, Week n°47 »