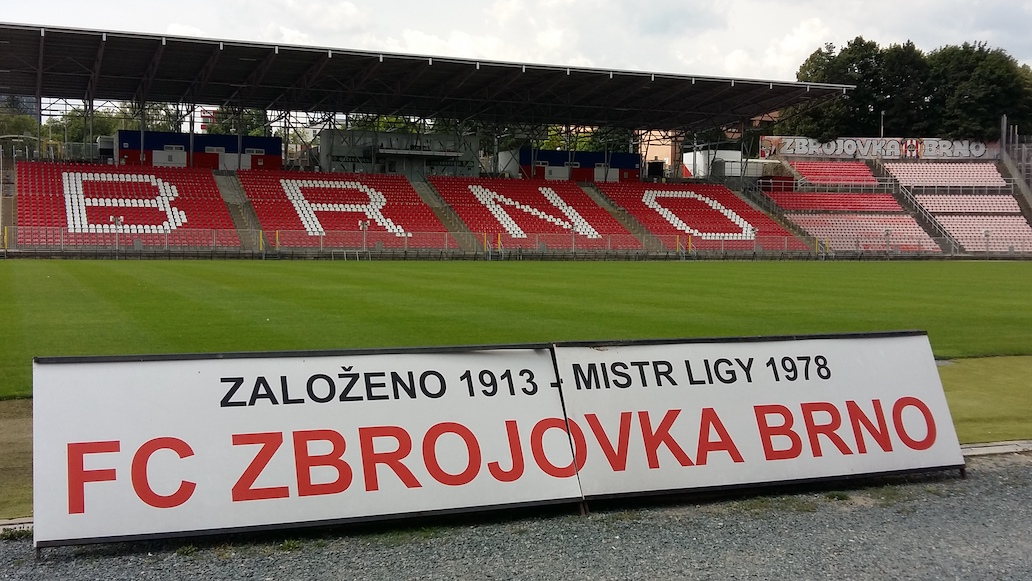 FC Zbrojovka hosts Vyšehrad on Friday at 7 p.m. as it tries to position itself for a spring-time run for a return to the top league. Photo credit: FC Zbrojovka.

Valachovič has coached the team in two games and he has six points to show for it. Líšeň beat FK Banik Sokolov on the road in the head coach’s debut.

“It’s a dream,” Valachovič said. “We went to Sokolov and I wondered what it would be like to win in Sokolov. We succeeded. I got about a hundred messages and phone calls. Another of my dreams was to win at home, because there have not been many home victories in the fall. I wanted to win and know what it would feel like. We did that, too. Plus, I think we’ve made a good base for the next matches. We were militant. We want to build on that aggression.”

Líšeň is in the middle of the league standings with a record of 5-4-4 for 19 points. Their 26 goals scored is tied for second and just two behind Dukla Praha, the scoring leaders.

This Saturday, Líšeň will travel to Dukla for a 10:15 a.m. game. Expect a high-scoring game.

The following Saturday Líšeň travels to FK Fotbal Třinec for another bunch game at 10:15 a.m. The final home game and the final game of the fall season is Nov. 16 against MFK Chrudim. That game starts at 1:30 p.m.

FC Zbrojovka Brno lost in Prague to FK Viktoria Žižkov last Saturday on national television. The team, nevertheless, maintained fifth place in the Fortuna:Narodni Liga with a record of 6-4-3.

Zbrojovka plays two teams that are lower in the standings — hosting Vyšehrad on Friday at 7 p.m. and Prostějov on Nov. 8 — before it travels to league-leading Pardubice on Nov. 23.

HC Kometa Brno took another game on Sunday, although they had to go into extra time and win in the shootout against visiting HC Verva Litvínov, 4-3. Two days earlier, they beat Pardubice, 5-1.

Kometa is has now won 10 of its last 11 games. The win against Litvínov is the only one of the 10 that was not a full three-point regular-time victory.

Overall this season, Kometa have nine normal wins and two wins in extra time. They have also lost one game in extra time and lost two games outright. Their 32 points are two more than second-place Karlovy Vary, which has played two more games.

One of the two season losses was on opening night of the season when they lost at Litvínov. The other loss was a 0-7 game against Zlín on Oct. 6, which is the only blemish in the past 11 games.

The next game is Friday at home against Mladá Boleslav at 6 p.m. Then, on national television, Kometa travels to HC Sparta Praha on Sunday for a 4 p.m. game.

Both Brno women’s basketball teams had tough weeks from which they hope to rebound.

On Wednesday, KP Brno lost its EuroCup game against visiting Botas (TUR) 63-88. Then, on Saturday, they were nearly doubled up by ZVVZ USK Praha, losing 57-109.

Žabiny Brno, on the other hand, won their CEWL game at SH Ostrava-Tatran, 73-82, on Wednesday, then gave up a significant lead to lose at BLK Slavia Praha, 87-84, on Saturday. Žabiny, who are 2-4 in the league, go to Sokol Hradec Králové today for a 6 p.m. game.

BK Žabiny Brno will travel to SBŠ Ostrava next Wednesday, then the Renomia ŽBL will take a three-week break until the next round of league play.

mmcité1 Basket Brno lost to visiting GEOSAN Kolín on Saturday and they will play two games this week as they attempt to get a Kooperativa NBL win.

The first opportunity is tonight at BK ARMEX Děčín (3-2) at 6 p.m. The second is at home and it will be a very difficult matchup against ČEZ Basketball Nymburk (6-0) on Saturday at 5:30 p.m.

mmcité1 Basket Brno has struggled to get its footing.

Kolín won its first game of the season by focusing on defending the wings. That allowed point guard Bryan Smithson to score 26 points. Only Petr Heřman, who sat most of the second half, scored in double digits (10 points).

Brno head coach Lubomír Růžička says that the passion that the team shows in practice is not showing up in the games.

The makeup of the team has been in flux, too. Richard Körner, one of the highly touted new players, exercised an option in his contract and left the team for BK Inter Bratislava two weeks ago. Pape Diatta, a forward from Senegal, has replaced him, even wearing his No. 11 jersey. Andraž Kavaš, who is from Slovenia, is another new face who has joined the team.

“We have a young team,” Smithson said, “and we just had two new guys come in this week. We to find some continuity on defense. That will feed the offense.”

A lazy Lokomotiva Brno-Horní Heršpice pass back to the goalkeeper resulted in a defensive scramble, a penalty and a 0-1 loss to FK Pardubice last Saturday.

“We played as though we were blind and deaf,” Lokomotiva coach Jaromir Pitak said. “It’s in our heads. It’s psychological. They need to really go into the games and sell it. They can’t take what they do in practice into the games.”

https://brnodaily.com/2019/10/30/sport/brno-sports-weekly-report-brno-teams-look-for-final-surge-to-end-fall-season/https://brnodaily.com/wp-content/uploads/2019/10/Zbrojovka301019-1024x576.jpghttps://brnodaily.com/wp-content/uploads/2019/10/Zbrojovka301019-150x84.jpg2019-10-30T11:19:22+01:00Bruno ZalubilSportBasketball,Brno,Czech Republic,Kometa,SportFC Zbrojovka hosts Vyšehrad on Friday at 7 p.m. as it tries to position itself for a spring-time run for a return to the top league. Photo credit: FC Zbrojovka. Brno, Oct. 30 (BD) — Kometa stay atop the standings with two more wins; KP Brno, Žabiny looking for momentum;...Bruno ZalubilBruno Zalubilbzalubil@hotmail.comAuthorA connoisseur of the unpredictable and unscripted drama of sports.Brno Daily

A connoisseur of the unpredictable and unscripted drama of sports.
View all posts by Bruno Zalubil →
« Brno Man Finds WW2 Explosive Material While Magnet Fishing in River Svitava
BUT… WHY BRNO? »