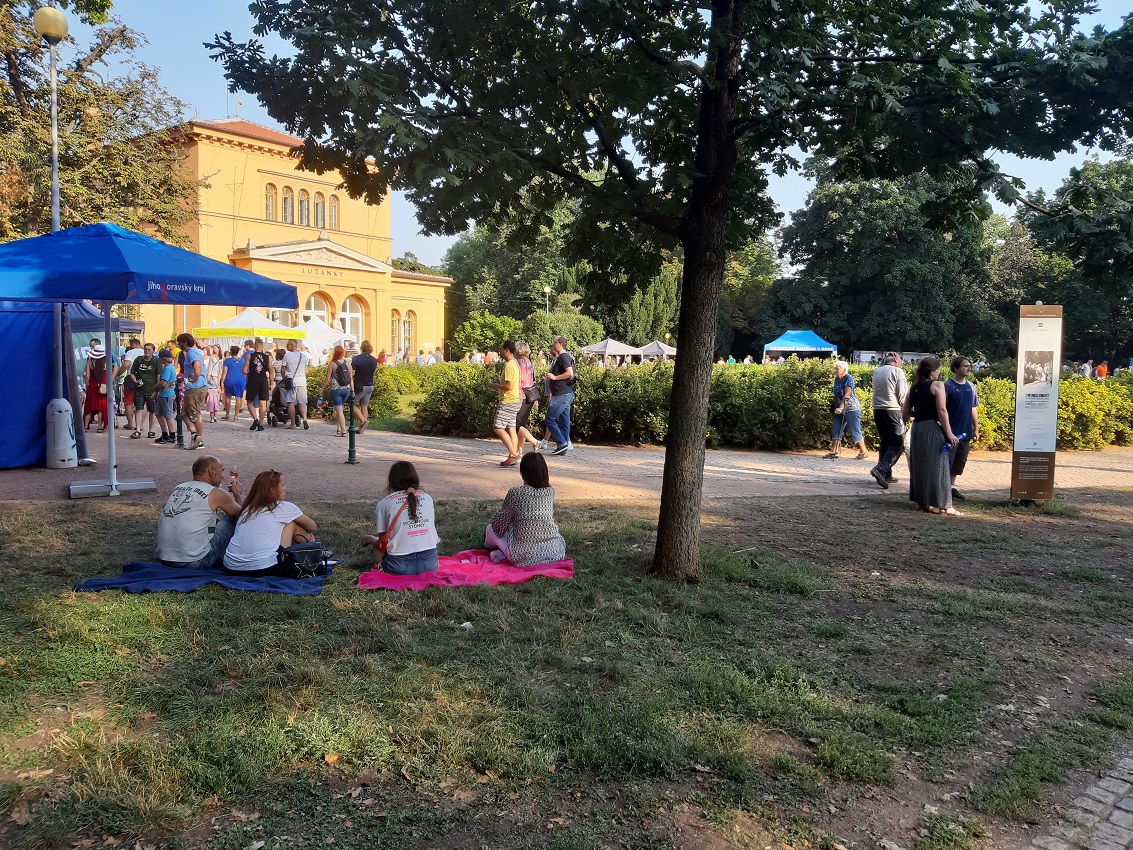 The twelfth edition of the popular festival began on Thursday with a ceremonial tree-planting in Lužánky Park, and will continue throughout this week with a rich program of internationally flavoured events. Photo: Luzanky park. Credit: KK / Brno Daily.

Brno, Sep 23 (BD) – The goal of Babylonfest is to acquaint the Czech majority in Brno with the culture and traditions of their neighbours from across the world. The festival is organized by the Committee for National Minorities of the Brno City Assembly, in cooperation with organizations representing national and ethnic minorities, and takes place under the auspices of Markéta Vaňková, Mayor of Brno. Commenting on the festival, Vankova said “During its existence, Babylonfest has found a firm place in the calendar of many people. While for some it is an opportunity to meet people from the same nation, talk in their native language, and remember their roots, for others it is an opportunity to learn about other countries, taste exotic specialties or listen to local music. In any case, it is an enriching seven days.”

Following a tree-planting ceremony in Luzanky Park on Thursday, during which a lime tree was planted, the symbol of Czech statehood, Friday was dedicated to classical music, with the opera singer Martino Hammerle-Bortoloti, Polish soprano Martina Macko, Greek singer Elli Aloneftou with pianist Ourania Menelaou and Hungarian oboists Anikó Kovarikné Hegedüs and Anna Bajorné Pataki all performing in the Old Town Hall. Saturday saw the event move to Moravské namesti, where there was a parade of national minorities, followed by performances of dance and music ensembles and the tasting of traditional dishes.

The program will continue throughout this week. On Monday at 6pm in Cabaret Špaček on Kopečná 46 there will be a discussion, “They live among us”, focused on the arrival and life of foreigners in the Czech Republic. The discussion will be attended by the Society of Friends of the Southern Slavs, representatives of the Union of Hungarians, and Mário Radačovský, the artistic director of the Ballet of the National Theater in Brno.

On Wednesday, the festival will continue with a pub quiz from 7pm at the Paradox theater studio at Křížová 20, and on Thursday from 5pm to 7pm, there will be a music-literary workshop at the Jiří Mahen Library in Kobližná 4, with the theme of “Freedom”. Speakers will include Nicole Votavová Sumelidis from the Hellenika Foundation, Judita Guštafíková from the Slovak Community in Brno and representatives of the Union of Hungarians and the German Minority in Brno, whose contributions will focus on texts by German writers depicting the events of the fall of the Berlin Wall on November 9, 1989.

Other events to take place as part of the festival include a football tournament on Sunday, September 22, an exhibition dedicated to the composer Stanislav Moniuszek, opening on September 26, a multicultural day with presentations about national minorities at primary schools on October 11, and a workshop at the Museum of Roma Culture about Lavutara on the same day.

For more information and the full festival program, see the website.

https://brnodaily.com/2019/09/23/culture/babylonfest-promotes-the-culture-and-traditions-of-minorities-in-the-czech-republic/https://brnodaily.com/wp-content/uploads/2019/09/luzanky-1024x768.jpghttps://brnodaily.com/wp-content/uploads/2019/09/luzanky-150x113.jpg2019-09-23T17:11:25+02:00Jack StephensArt & CultureBrno,Brno Expats,Culture,Expats Czechia,FestivalThe twelfth edition of the popular festival began on Thursday with a ceremonial tree-planting in Lužánky Park, and will continue throughout this week with a rich program of internationally flavoured events. Photo: Luzanky park. Credit: KK / Brno Daily. Brno, Sep 23 (BD) - The goal of Babylonfest is...Jack Stephens jack.stephens50@gmail.comAuthorA writer and English teacher originally from London who has lived in Brno since 2011, interested in politics, low culture, and all things strange and/or Czech.Brno Daily

A writer and English teacher originally from London who has lived in Brno since 2011, interested in politics, low culture, and all things strange and/or Czech.
View all posts by Jack Stephens →
« Police Called To Ventilation Altercation On Brno Bus
Residential Parking: Signs Up In New Zones From This Week, To Come Into Effect in November »