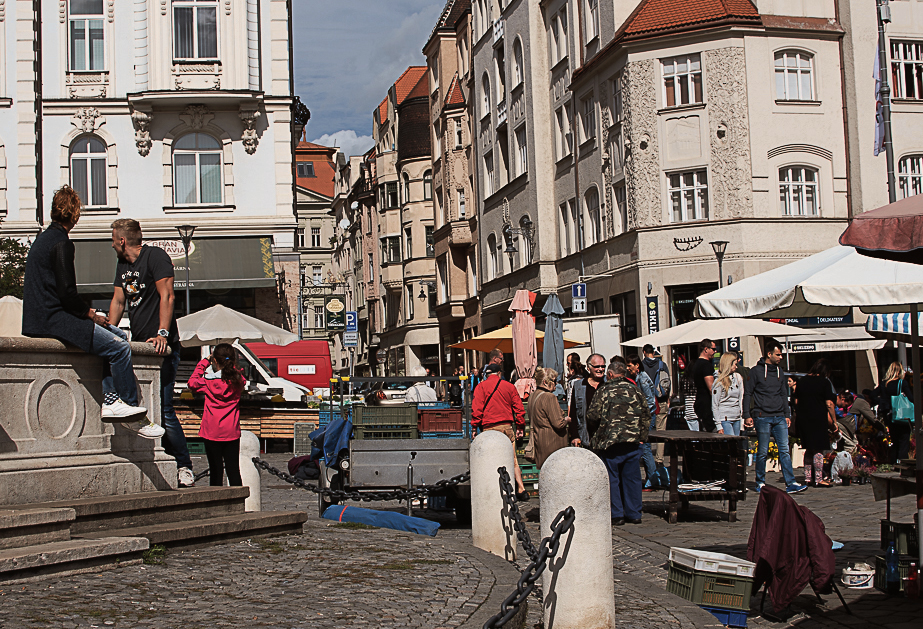 If you are like me, when the weather gets colder and school restarts then you feel like you should learn something. Getting better in speaking Czech is usually my goal. Photo credit: Brno Daily.

Here is a life lesson about Czech society that I learned the hard way. It is about greetings. They are so common, yet they can be surprisingly fraught with complications.

As an American, it is easy to greet anyone and everyone with “Hello” or “Hi”. Czechs, however, have an implied social structure that affects their choice: when addressing someone of higher status, like a doctor or an older person, you should use the more formal “Dobrý den” (Good day); when being more informal, you can use “Ahoj” (Hi).

[Fun fact: “Hello” is only about 150 years old. Thomas Edison, a famous inventor, suggested that it should be used on the telephone when it first appeared. Alexander Graham Bell, who actually patented the first practical telephone, wanted to use the established nautical greeting, “ahoy.” In the end, “hello” became commonplace because it was printed in early telephone books, which served as well-read instruction manuals for the new contraption.]

Of course, it is boring to say “Hello” all the time, especially when dealing with acquaintances and colleagues. I always try to think of something more interesting. When I first moved to Brno, I would greet people by saying “Jak se delaš”. Nobody else said it so I thought it would be interesting. I figured that it was a translation of “How are you doing?” It is, however, quite wrong and very strange to Czechs.

Eventually, I just used what all the Czech language books teach: “Jak se maš?” (Or, when being formal or speaking to a group, “Jak se máte”.) It basically means “How are you?” This is the common and natural phrase; however, it comes with an unwanted consequence: people will answer you.

Often, I don’t expect (or want) an answer. In America, it is common to use a throw-away question, like “How are you doing?” or “What’s up?” or, among men, “How’s it hanging?” These greetings just fill space. No answer is expected. The normal response is another throw-away line, like “Ah, you know” or “S’aright” or “Comfortably to the left”.

It is not uncommon to walk past someone in a corridor at work and have the two people utter unanswered questions:

Nobody breaks their stride. Conversation done.

This is clearly a strange aspect of American society. Students learning English tend to think about what they are saying and it is not logical. Plus, it is considered rude to answer a question with a question.

In the Czech Republic, a question generally gets an answer. I learned the hard way:

One morning in my first year of living in Brno, I was rushing to catch a bus and I bumped into my Czech neighbor. I should have said “Ahoj” and continued walking; instead, I said “Jak se maš” — and got a response.

“Stojí to za hovno,” he sighed, then started talking about the foreboding weather forecast and the work that he had to do that day and the fact that he was hungry. The phrase he used means “It sucks” and his list of grievances proved it.

Slightly shocked, I stood there, listening. He was so earnest in his complaints that I could not break free. I looked to be polite, yet, all I could think of was how a simple greeting led to such a convoluted sad-sack story.

In the end, I missed my bus and I was late for work.

At least I learned that the weather was going to turn bad later that day, and to use “Jak se maš” only when I have a bit of extra time and care to know the answer.

https://brnodaily.com/2019/09/21/column/bruno-jak-se-mas/https://brnodaily.com/wp-content/uploads/2018/11/Zelny-trh-people-relax-brno-streets.jpghttps://brnodaily.com/wp-content/uploads/2018/11/Zelny-trh-people-relax-brno-streets-150x102.jpg2019-09-21T05:55:31+02:00Bruno ZalubilColumnBrno,Czech Republic,Expats CzechiaIf you are like me, when the weather gets colder and school restarts then you feel like you should learn something. Getting better in speaking Czech is usually my goal. Photo credit: Brno Daily.Here is a life lesson about Czech society that I learned the hard way. It is about...Bruno ZalubilBruno Zalubilbzalubil@hotmail.comAuthorA connoisseur of the unpredictable and unscripted drama of sports.Brno Daily

A connoisseur of the unpredictable and unscripted drama of sports.
View all posts by Bruno Zalubil →
« In Photos: Brno Students hold Biggest Protest yet against Climate Change
Interview with Vojtěch Březík, the director of BEST’s first show of the season: the plays The Real Inspector Hound and The Actor’s Nightmare »