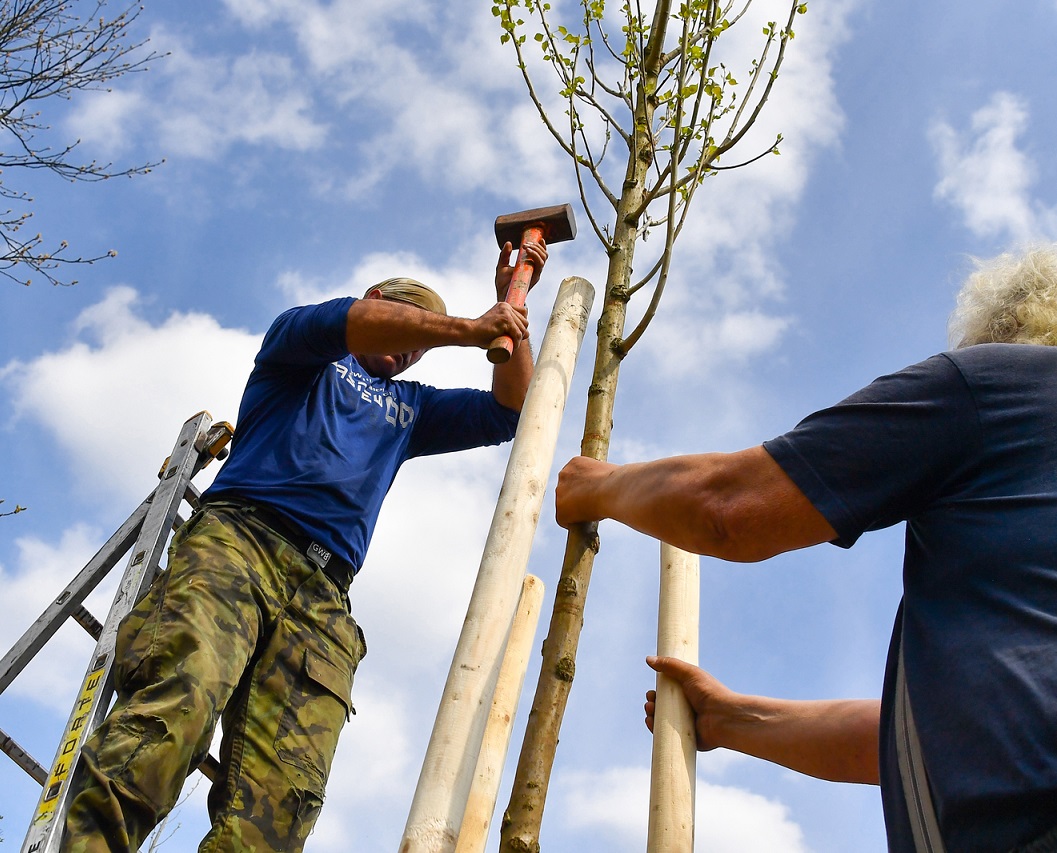 The seventh and eighth projects to be completed as part of the city’s participatory budgeting program will be a tree-lined alley in Řečkovice, in the area known as Zamilovaný Hájek (“The Grove of Love”), and a public barbecue space in Nový Lískovec. Photo credit: damenavas.brno.cz.

Brno, Apr 26 (BD) – The participatory budgeting program, known as Dáme Na Vás, allows Brno residents to vote on projects, suggested by the public, to receive public money. This week, two newly completed projects that were chosen to be realised as part of the program will be officially opened.

The rejuvenation of the poplar-lined walking route in Řečkovice placed fourth in voting in the first year of the program, with 1,262 votes, and has been completed at a cost of CZK 928,000. Commenting on the completion, Michal Polanský, who proposed the project, said: “Thanks to the ancient alley, visitors to Zamilovaný Hájek have the unique feeling that they are in nature, yet they are only a few steps from the city. The alley goes through a path lined with lilac bushes, which provides a fragrant walk in spring. However, the centuries-old poplars have thinned over time, so I suggested adding to them. I am very pleased that my idea found support among the citizens of Brno.” The opening of the rejuvenated alley will take place on Friday, April 26 at 13:30 in the alley near Podhájí.

The “Barbecue Space in Nový Lískovec” project placed sixth in the first year of the program, with 1,150 votes. The total cost was CZK 1,368,289. The new public barbecue space was created by the modification of a public bonfire space. Jaroslav Kovařík, proposer of the project, explained his idea: “The public fireplace located in the lower part of the Pod Plachtami area next to the BMX track was in poor condition and it wasn’t possible to enjoy sitting there. I proposed a modification that included public sports facilities, the BMX track, and gave the public other opportunities for leisure, regardless of age.”

The ribbon cutting ceremony for the new barbecue space will take place on Tuesday, April 30 at 4 pm in Pod Plachtami Park in Nový Lískovec, and will be attended by Kovařík, Tomáš Koláčný (Piráti), Deputy Mayor of Brno, and Jana Drápalová (Green Party), Mayor of Nový Lískovec.

Koláčný also welcomed the completion of the projects: “I am very pleased that we have succeeded in gradually implementing the winning participatory budgeting projects. Zamilovaný Hájek is a popular place, and not just for the residents of Řečkovice and neighboring districts, so I am very happy about ​​Mr. Polanský’s idea to restore this beautiful alley. And I believe that the barbeque space in Nový Lískovec will be useful for all those who like to sit with friends and prepare something good in nature. Dáme na vás is mainly about Brno residents and their own ideas about how to help or improve their surroundings.”

You can follow the current progress of winning projects from the first and second year of Dáme Na Vás here.

By May 15, Brno residents can submit their ideas for a better Brno for this year’s participatory budgeting. They will be able to vote by May 31. For more detailed information on submitting proposals and schedules, visit the Dáme Na Vás website.

https://brnodaily.com/2019/04/26/news/politics/two-new-completed-projects-to-be-opened-as-part-of-participatory-budgeting-program/https://brnodaily.com/wp-content/uploads/2019/04/podhaji-brno-1024x826.jpghttps://brnodaily.com/wp-content/uploads/2019/04/podhaji-brno-150x121.jpg2019-04-26T09:18:23+02:00Jack StephensPoliticsBrno,News,Participatory Budgeting,PoliticsThe seventh and eighth projects to be completed as part of the city’s participatory budgeting program will be a tree-lined alley in Řečkovice, in the area known as Zamilovaný Hájek (“The Grove of Love”), and a public barbecue space in Nový Lískovec. Photo credit: damenavas.brno.cz.Brno, Apr 26 (BD) -...Jack Stephens jack.stephens50@gmail.comAuthorA writer and English teacher originally from London who has lived in Brno since 2011, interested in politics, low culture, and all things strange and/or Czech.Brno Daily

A writer and English teacher originally from London who has lived in Brno since 2011, interested in politics, low culture, and all things strange and/or Czech.
View all posts by Jack Stephens →
« Údolní to Reopen After One Year, With Quieter Trams and Accessible Tram Stops
In Photos: 74th Anniversary of Brno’s Liberation from the Nazis »