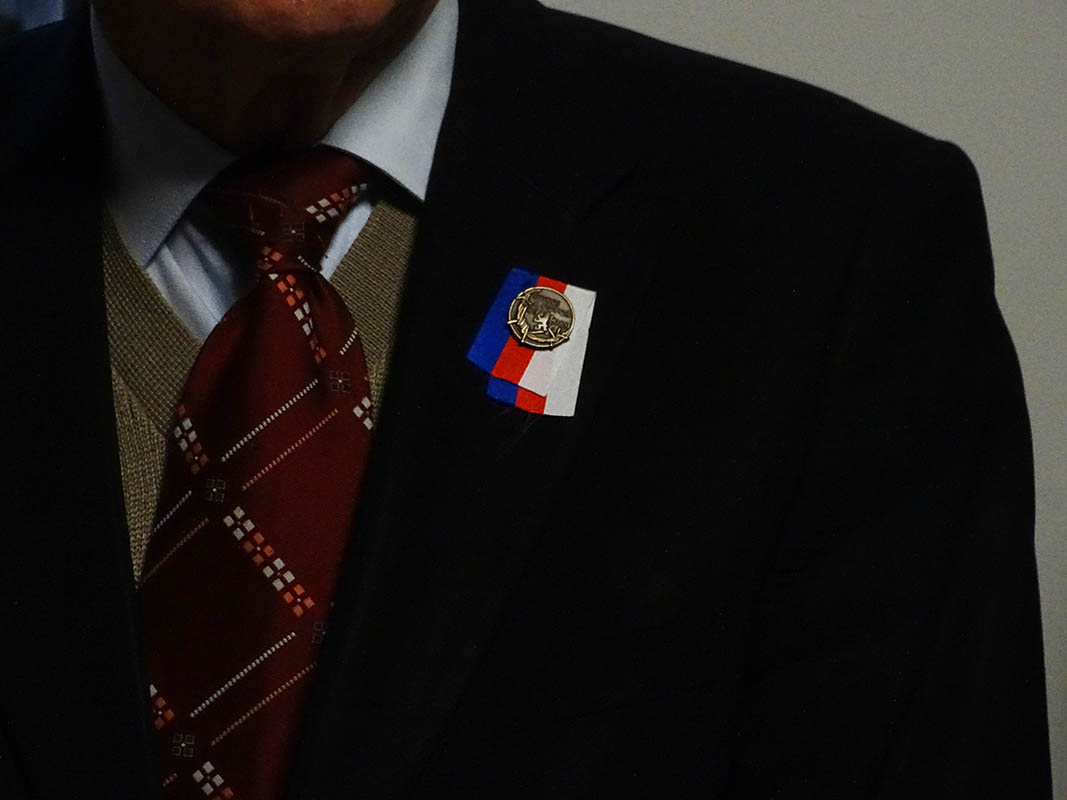 A plaque honouring Josef Robotka was unveiled in Alfa Pasaz on Thursday – the first of its kind in Brno. Photos by Zenon Moreau.

Brno, Apr 4 (BD) – “Last Address”, a pan-European project to commemorate the victims of communism, has arrived in the Czech Republic. The project’s aim is to install memorial plaques with biographical details of those persecuted or murdered by communist regimes, on the houses where those people last lived. In Brno, the first memorial plaque was unveiled on Thursday in Alfa Pasáž, Poštovská 6 – which was the last address of Josef Robotka, a prominent member of both the anti-Nazi and anti-communist resistance in 1940s Czechoslovakia.

In photo: Josef Robotka. Photo: Courtesy of Sokol Brno I.

“After the tragic death of General Luža, Josef Robotka took command of the resistance in Moravia.”

Josef Robotka was born in 1906 in Tasov. After graduating, he decided to pursue a military career, and by the beginning of World War II he had reached the rank of staff captain. From the beginning of the Protectorate of Bohemia and Moravia, he was involved in the anti-Nazi resistance, as a member of the resistance organization Defense of the Nation and the Council of Three. After the tragic death of General Luža, he took command of the resistance in Moravia. He was one of the most important figures in the domestic resistance, organizing guerrilla resistance and maintaining contact with the foreign resistance in exile in Britain. After the war he was promoted, and from 1948 he began to organize anti-communist resistance.

In 1950, Robotka was arrested and charged with treason and espionage. At 5:40am on the morning of November 12, 1952, he was transferred to the Prague-Pankrác prison. Immediately prior to his execution, Robotka began his last words with: “I was promised …”, but was not allowed to finish the sentence.

The installation of the plaque is organized and financed by Sokol Brno I. Commenting on the project, Michal Doležel, Deputy Leader of Sokol Brno I. said: “Josef Robotka was one of the most prominent Czech anti-Nazi and anti-communist resistance fighters who we want to honour in this way. Robotka was also an active member of Sokol. In the years to come, we will also commemorate other victims.”

The plaque was unveiled on April 4 at 2:00 pm in Alfa Pasáž, Poštovská 6. The event was attended by the great-nephew of Josef Robotka, as well as Cyril Michalica – a former political prisoner of the 1950s, who met Robotka at Cejl Prison.

https://brnodaily.com/2019/04/04/news/last-address-project-to-honour-victims-of-communist-persecution-with-memorial-plaques/https://brnodaily.com/wp-content/uploads/2019/04/Last-Adress-cr_Zenon-Moreau-4-1-1024x768.jpghttps://brnodaily.com/wp-content/uploads/2019/04/Last-Adress-cr_Zenon-Moreau-4-1-150x112.jpg2019-04-04T15:44:37+02:00Jack StephensCzech Republic / WorldBrno,Communism,Czech Republic,History,News,PoliticsA plaque honouring Josef Robotka was unveiled in Alfa Pasaz on Thursday - the first of its kind in Brno. Photos by Zenon Moreau.Brno, Apr 4 (BD) - “Last Address”, a pan-European project to commemorate the victims of communism, has arrived in the Czech Republic. The project’s aim is...Jack Stephens jack.stephens50@gmail.comAuthorA writer and English teacher originally from London who has lived in Brno since 2011, interested in politics, low culture, and all things strange and/or Czech.Brno Daily

A writer and English teacher originally from London who has lived in Brno since 2011, interested in politics, low culture, and all things strange and/or Czech.
View all posts by Jack Stephens →
« Olomouc Sends its Best Comic Talent to Brno for an “Alien Invasion”
Police are Investigating Monday’s Accident as Negligence »