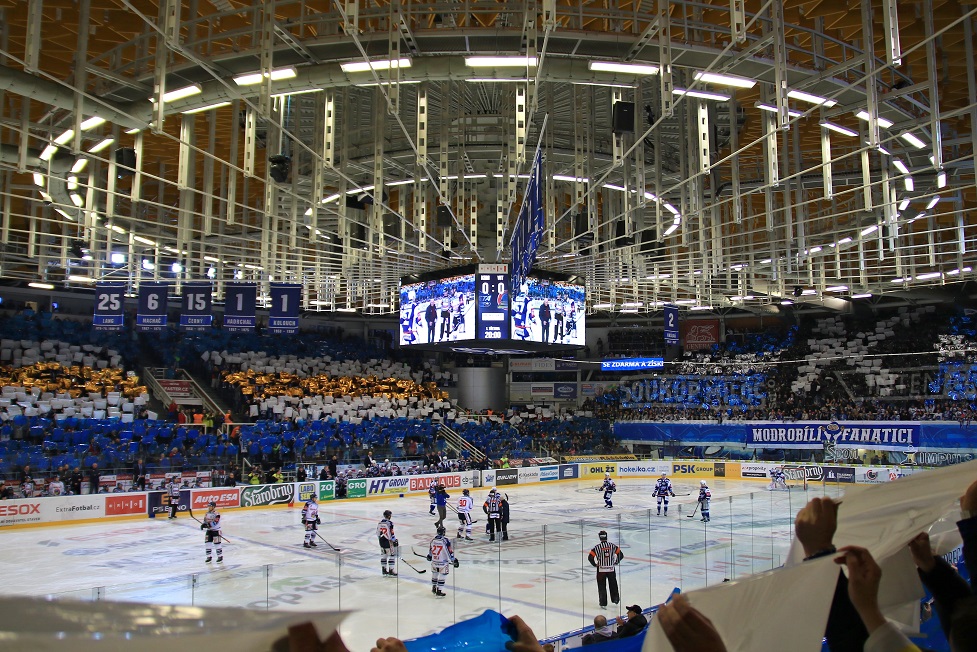 Is it happening again?

In both the 2016-17 and 2017-18 seasons, HC Kometa sputtered in the regular season of the Tipsport extraliga only to rally in the postseason en route to hoisting the championship trophy. In this 2018-19 season a similar pattern may be beginning: Kometa finished fifth in the regular season and they have dominated at fourth-place Hradec Králové so far in the quarterfinals.

Kometa, which lost all four regular-season games to Hradec Králové, won Game 1 on Monday, 1-3, and then Game 2 on Tuesday, 0-5.

The series comes to Brno on Friday and Saturday. Both games start at 7 p.m. The Saturday game is on (ČT Sport).

Jakub Orsava scored a hat-trick in Game 1, with assists on each of the three goals by Jan Hruška. Orsava, who also scored in Game 2, has been with Brno since late January. Hruška added a goal and two assists in Game 2.

Marek Čiliak was in goal for both postseason games. Čiliak was the cornerstone of the defense in both title runs and he recently returned after spending most of the season in the KHL with HC Slovan Bratislava. His Game 2 shutout was his third in 10 games with Brno, which won seven of those games.

In between the frantic attempts by Loko Trutnov to stave off defeat and keep their season alive, Žabiny Brno players stepped to the free-throw line and calmly converted their shots to maintain their lead and win the ŽBL quarterfinal series.

Beáta Adamcová hit two free throws. Kateřina Zohnová hit two, then two more. Karolína Malečková hit two. And Adamcová finished the series of 10 free-throws in a row as Zabiny advanced to the semifinals with a 96-92 victory on Thursday. They swept Trutnov, 3 games to 0.

The schedule for the semifinal series is yet to be announced. A Brno team is guaranteed to be in the championship series, likely against ZVVZ USK Praha, which also swept three quarterfinal games to reach the semifinals.

Within hours of their quarterfinal series victory over Loko Trutnov, Žabiny Brno were in the air on the way to Rostov-on-Don, Russia, for the European Women’s Basketball League Final Four.

Though they were close midway through the fourth quarter of both games — an 80-70 loss to eventual-champion TTT Riga in the semifinal game on Saturday and a 65-74 loss to home-team Rostov-Don-SFEDU on Sunday in the third-place game — Brno showed signs of fatigue by making several ill-advised passes and committing several errors in late in the games as they tried in vain to take the lead.

The positive way to look at the 2-2 tie against FC Viktoria Plzeň on Saturday is that that FC Lokomotiva-Horni Herspice got a point and moved out of the bottom spot of the standings of the top women’s football league in the country.

The less positive way to look at the result is that the team could really have used the two extra points that a win would have brought because they are fighting against relegation with only three games left in the regular season.

“We need every point,” said head coach Milan Matejka. “The important thing is that we didn’t lose.”

Lokomotiva jumped out to a quick lead when Nikol Mazúchová got an outlet pass at midfield and broke away from the defense. She blasted the ball at the goalkeeper, then easily collected the rebound to score the goal.

Matejka felt that the early goal possibly led to some overconfidence and lack of intensity.

“Maybe if we had gotten that (early) goal (against us) we would have been more focused,” he said. “In the second half we raised our intensity and it was easy to see. The problem is that we were pressing a little bit. A lot of the time our players wanted to move the ball on the first touch. If they had held onto the ball for two touches I think they would have created more.”

In the 57th minute, Tessa Andujar followed a loose ball toward the Plzeň goal. She had a step on a defender and the goalkeeper aggressively came out at her. Andujar had two choices: dribble of shoot. She chose the later and nicely poked the ball over the top of the goalkeeper and into the goal to tie the game.

“I have been known to dribble too much,” said Andujar, who played her first Czech league game. “I recently saw Japan play and one of the Japanese girls was able to chip the ball over the keeper. I have been working on that, and trying to decide when I should shoot it and when I should dribble.“

Lokomotiva Brno will have a very important game against FC Hradec Králové in Horni Herspice on April 13 at 11 a.m. The loser could very well be the team that will be relegated at the end of the season.

Šimon Šumbera scored at 29 minutes and Michal Škoda scored at 33 minutes, but the scoring outburst was only good for the halftime lead because league-leaders České Budějovice quickly rebounded to win 3-2 on Sunday.

The top three teams in the Fortuna:Narodni Liga get a chance to advance into the top league Fortuna:Liga at the end of the season. Zbrojovka is in seventh place, eight points behind third-place Hradec Králové (37 points).

egoé Basket Brno Hits the Road for Group A1

Injury plagued egoé Basket Brno dropped two games last week and it will play its next four games on the road as they start their second round of Kooperativa NBL Group A1.

With several big players on the bench with injuries, including Reggie Keely, Radek Farský and Viktor Vašát, Brno used just eight players in both recent losses (10 to 12 is more normal); this has resulted in more weary legs at the end of the games, on top of the loss of the injured-team-member skills.

On Saturday, Brno lost, 95-57, to undefeated league powerhouse ČEZ Basketball Nymburk (29-0). Stegbauer had the best game of his season with a team-high 19 points. He took advantage of the extra attention that the Nymbuk defense paid to Geiger, who scored a season-high 30 points in the previous meeting but scored only three on Saturday. Stegbauer was five of six from 3-point range.

egoé Basket Brno is eighth in the Group A1 standings and four games behind sixth-place Děčín (14-15) and seventh-place Opava (14-15). Brno looks bound for the Pre-Play-Off Series where it would play against the one of the top teams from Group A2 in a best-of-three series for the chance to play in the main Play-Off Bracket.

https://brnodaily.com/2019/03/20/sport/brno-sports-weekly-report-kometa-attacks-postseason-in-quest-for-golden-hat-trick/https://brnodaily.com/wp-content/uploads/2019/03/KometaDRFG200319.jpghttps://brnodaily.com/wp-content/uploads/2019/03/KometaDRFG200319-150x100.jpg2019-03-20T15:22:32+01:00Bruno ZalubilSportBrno,Sport,Things To Do in BrnoHC Kometa continues the postseason at DRFG Arena Friday and Saturday with a 2-0 quarterfinal-series lead against Mountfield HK. Photo credit: HC Kometa.Brno, Mar. 20 (BD) — Žabiny Brno and KP Brno to meet in ŽBL semifinals, Lokomotiva inches up the standings with a tie, Zbrojovka Brno cannot maintain first-half lead, egoé...Bruno ZalubilBruno Zalubilbzalubil@hotmail.comAuthorA connoisseur of the unpredictable and unscripted drama of sports.Brno Daily

A connoisseur of the unpredictable and unscripted drama of sports.
View all posts by Bruno Zalubil →
« Jobspin Job Fair: Tips and Advice for Visitors, What to Expect
Council Approves Extensive Changes to Parking Zones and Charges in City Centre »