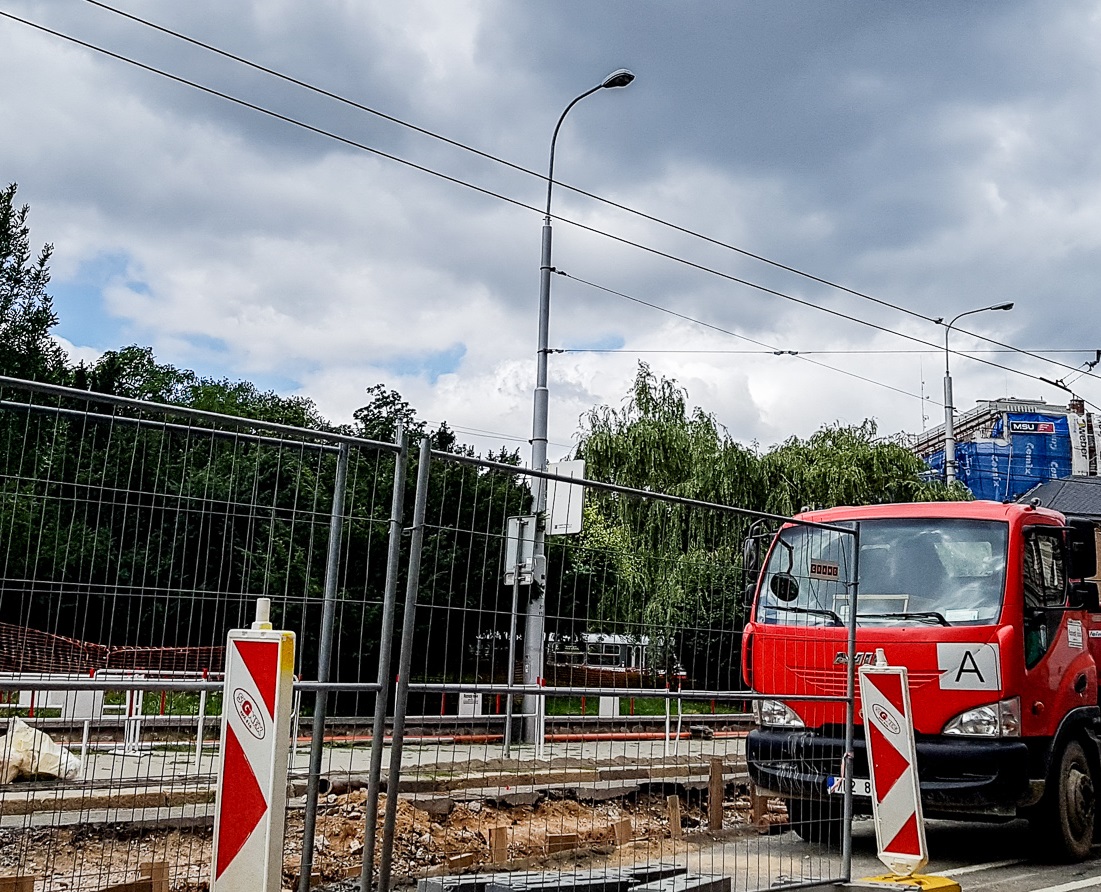 Important works being carried out include repairs to damaged tram lines, upgrades of steam pipelines to hot water pipelines, and optimisation of the sewer system to prevent accidents. The majority of the work will take place in July and August, and will require substantial adjustments to the road and public transport networks. Photo: Koliště last summer. // Credit: Casadei Graphics.

Brno, Mar 17 (BD) – A new working group to coordinate reconstructions and road closures in Brno was set up in December 2018 (Read more in our previous story from January: “New Working Group Aims to Coordinate Reconstructions and Road Closures in Brno”). These efforts are already having some impact; works carried out in Cejl this summer will see long-planned improvements to heating pipelines by Brno Teplarny take place at the same time as essential repairs to tram lines in the same section of road, which are themselves scheduled to coincide with pre-planned suspension to the tram lines in connection with ongoing reconstruction works on the bridge in Zábrdovice. This coordination will prevent the street being dug up twice in a matter of months.

However, the working group will not be able to eliminate all obstacles to drivers this summer, as Brno Mayor Marketa Vanková explained: “[The working group] tries to map all the repairs, adjust their commencement dates, and possibly negotiate them to be moved so that drivers can drive through Brno as easily as possible. Although the working group is working to the full, no immediate effect can be expected. The reconstructions awaiting Brno this year have been planned for a long time, often several years in advance. I thank the drivers for their patience, as the results of the reconstruction will improve living conditions for all of us.”

The long-term project of Teplárny Brno, in which older steam pipelines are exchanged for modern and more efficient hot water pipelines, will move to Cejl in March. Traffic on Cejl Street will be partially restricted from 13 March. The right lane will close in the direction from Radlas to Francouzska. Tkalcovská will be closed for about 100 metres in both directions from Cejl. Public transport will be remain in operation, but some parking spaces will be temporarily removed. These works should be completed by October at the latest. However, the main roadworks in this area, the repairs to tram lines in the section between Soudní and Francouzská, will be carried out during the holidays. According to Miloš Havránek, Director of DPMB: “The replacement of these tracks follows the ongoing reconstruction of the bridge in Zábrdovice. In the summer, they will be disconnected from the network, so trams could not travel via Cejl anyway. We have taken advantage of this situation in order to be able to repair tracks that are already in a deteriorated technical condition.”

DPMB will repair 500 metres of track in total, and also add drainage and sound insulation to the repaired section. Cejl will remain closed, with side streets accessible via other routes. The works will affect a number of tram and bus routes:

Brno City Transport Company is also preparing works in other parts of Brno. From April to November it will repair the tram tracks on Bubeníčkova. However, this will not require any further road closures, as the repairs are included in the reconstruction project of Zábrdovická. DPMB also plans to repair the Jedovnická line in the Ostravská – Novolíšeňská section during the summer holidays. Tram line 8 will be diverted to Juliánov in the interval, leaving intermittently with line 12 during this period. Line 10 will terminate at Krásného. Replacement services to Líšeň will be provided by the bus lines 55 and 78, which will serve the Dělnický dům interchange.

Two important projects are planned for this year by the Brno Waterworks and Sewerage System. From June 2019 to September 2020, they will carry out reconstruction works on the sewerage and water supply on Lužánecká. According to Jakub Kožnárek, General Director of Brno Waterworks and Sewerage (BVK), “The work includes replacement of water mains, sewerage and renewal of communications. The reconstruction will be coordinated with works on the gas pipeline. The scheme of traffic closures connected with this work is still under negotiation.”

The second major reconstruction of the sewerage system and the water supply is planned by BVK on Bohunická. The start is scheduled for September, by which time Dornych Street will have reopened. In addition to the reconstruction of sewerage and water mains, replacement of public lighting is also planned in coordination with the Brno Technical Network, and upgrades to communication equipment are being coordinated with Brno’s road authorities. Water system accidents are frequent in these areas, causing problems for busy traffic. By carrying out these two reconstructions, accidents will be prevented and the supply of drinking water will have fewer problems.

Traffic restrictions will also arise as a result of reconstruction works planned by the Road and Motorway Directorate. From early March to July, traffic will be closed on the I / 43 bridge (Hradecká – Královo pole station). Due to the complete closure, drivers will not be able to access the road bridge to Žabovřeská in the direction of Bystrc from April to September. According to David Fiala, Director of the Brno Road and Motorway Directorate, “During the summer holidays, the ramp to the city is going to be closed. This issue will be discussed with DPMB so that we can find the best alternative bypass routes, which will also serve to provide public transport services.”

All current information can be found at www.doprava-brno.cz and  www.kopemezabrno.cz.

https://brnodaily.com/2019/03/17/news/transport/extensive-road-and-infrastructure-works-planned-for-summer-2019-will-mean-several-road-closures-across-brno/https://brnodaily.com/wp-content/uploads/2018/05/pisarecka-traffic-restrictions-2-1024x830.jpghttps://brnodaily.com/wp-content/uploads/2018/05/pisarecka-traffic-restrictions-2-150x122.jpg2019-03-17T09:30:00+01:00Jack StephensTransportArchitecture,Brno,Traffic,Transport,Urban PlansImportant works being carried out include repairs to damaged tram lines, upgrades of steam pipelines to hot water pipelines, and optimisation of the sewer system to prevent accidents. The majority of the work will take place in July and August, and will require substantial adjustments to the road and...Jack Stephens jack.stephens50@gmail.comAuthorA writer and English teacher originally from London who has lived in Brno since 2011, interested in politics, low culture, and all things strange and/or Czech.Brno Daily

A writer and English teacher originally from London who has lived in Brno since 2011, interested in politics, low culture, and all things strange and/or Czech.
View all posts by Jack Stephens →
« Smile and Shine From the Inside Out with DUO SMILE
Public Debate on Brexit and its Consequences »