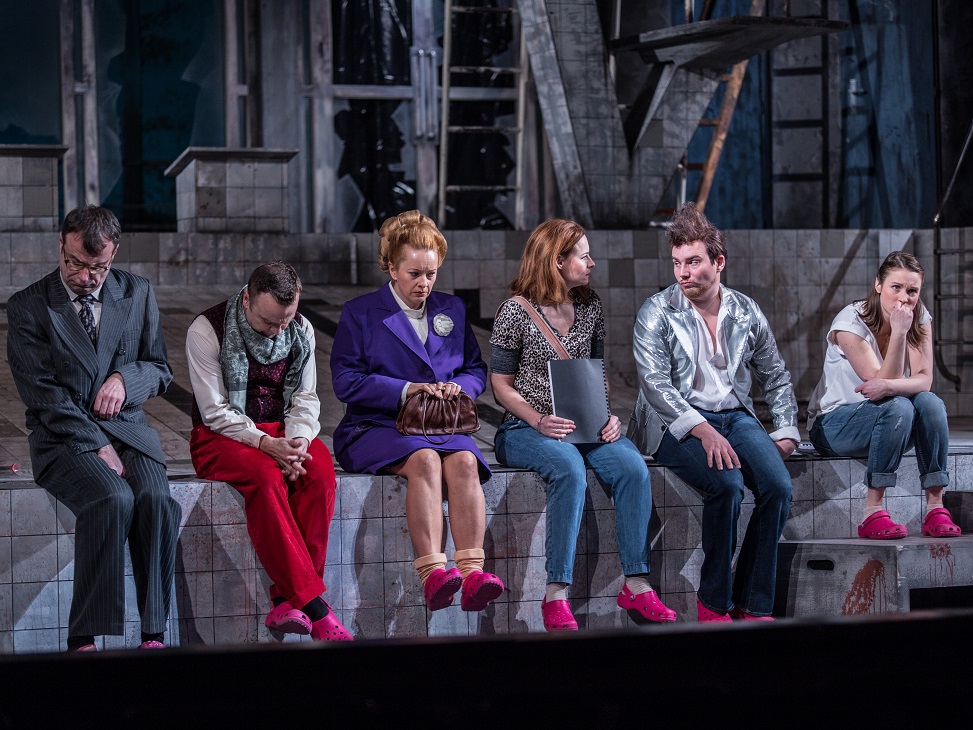 The National Theater in Brno (NdB) has a fantastic program for the month of March. Theatre-goers can look forward to drama with English subtitles, including newly-opened crowd-pleasing comedy “Night of Fools”, Sergei Prokofiev’s endlessly romantic internationally loved ballet drama “Romeo and Juliet”, or a Finnish opera inspired by a French legend “L’amour de loin”. Photo: “Night of Fools”. Credit: Courtesy of NdB.

On March 7, a classic story inspired by real events from pre-war England will be told in Mahen Theatre. As you might have guessed, “The King’s Speech” (in Czech “Králova řeč”), also adapted into an Oscar-winning film, will be performed with English subtitles. The main characters are masterfully portrayed by popular actors Ladislav Frej and Martin Sláma.

On March 9, Mahen Theatre will host the crowd-pleasing comedy “Night of Fools” (Noc bláznů) by Australian author Louise Nowra. How does a young director at the beginning of his career deal with the task of rehearsing an opera by Mozart with a group of crazy people in a psychiatric hospital as part of their therapy? Plenty of laughs and pink croc shoes are essential parts of this great performance, the latest in the Mahen Theatre repertoire. The Brno audience appreciated the Australian humour, and loved the NdB premiere on February 15; roars of laughter, huge applause and big grins on the audience’s faces were a clear compliment to the author, director and cast of the show.

The theatrical adaptation of the Czech classic “Kerosene Lamps” by Jaroslav Havlíček is the last of the month’s English-friendly shows, on March 18. Hana Tomáš Briešťanská, the lead actress, won a prestigious Thálie award for her performance.

The most famous tragic story of young love, Shakespeare’s Romeo and Juliet – this time with musical accompaniment and graceful dancing – will return to Brno on March 8, International Women’s Day.

“It is 80 years since the world premiere of Romeo and Juliet in Brno.”

Sergei Prokofiev’s ballet drama Romeo and Juliet had its world premiere at the National Theatre of Brno in 1938, choreographed by the Brno ballet legend Ivo Váňa Psota. Not many theatre companies can boast that they staged the world premiere of a work that has become one of the most performed ballets worldwide.

This is the second opening of a worldwide classic this year in Janacek Theatre. The incredibly moving and mesmerizing “Swan Lake”, by Pyotr Ilyich Tchaikovsky, took to the stage in Janacek in February, and there was not a dry eye in the house at the tragic death of Odetta.

“Our tender words sail between the shores…”

Long ago in the south of France there lived a troubadour. He sang songs of love for an imaginary woman, then set out on a crusade and never returned. Neither his name nor his verse were forgotten, and over time a legend grew of how he had set off for Tripolis seeking the lady of his heart, to die there in her arms… The Finnish contemporary composer Kaija Saariaho was charmed by the legend of Jaufré and set several of his poems to music in 1993. From those songs, there was just a small step to an opera, and Jaufré’s story became the subject of her first operatic work.

L’amour de loin premiered in 2000 at the famous Salzburg Festival. The opera, conducted by Marko Ivanović and directed by Jiří Heřman, won the Divadelní Noviny Prize in the category “Musical Production of the 2016/17 Season”, and Divadelní Noviny’s “Success of the Month”.

Don’t miss the return of L’amour de loin by Kaija Saariaho to the Janáček Theatre! There are only three more performances before the end of the season: the 23rd, 24th and 29th of March 2019.

https://brnodaily.com/2019/03/01/culture/the-national-theater-in-brno-will-stage-both-modern-and-classic-english-friendly-pieces-in-march/https://brnodaily.com/wp-content/uploads/2019/03/night-of-fools-brno-mahen-theater-play-with-ENG-subs.jpghttps://brnodaily.com/wp-content/uploads/2019/03/night-of-fools-brno-mahen-theater-play-with-ENG-subs-150x113.jpg2019-03-01T19:48:34+01:00BD StaffArt & CultureBrno,Culture,Theatre,Things To Do in BrnoThe National Theater in Brno (NdB) has a fantastic program for the month of March. Theatre-goers can look forward to drama with English subtitles, including newly-opened crowd-pleasing comedy “Night of Fools”, Sergei Prokofiev’s endlessly romantic internationally loved ballet drama 'Romeo and Juliet', or a Finnish opera inspired by a...BD StaffBD Staff team@brnodaily.czAdministratorBrno Daily - English News and Events in Brno.Brno Daily

Brno, Culture, Theatre, Things To Do in Brno

Brno Daily - English News and Events in Brno.
View all posts by BD Staff →
« In Photos: “Sharks” to Replace “Pack” of Cats at Šilingrovo náměstí
Writing Contest Will Capture the Spirit of Brno »