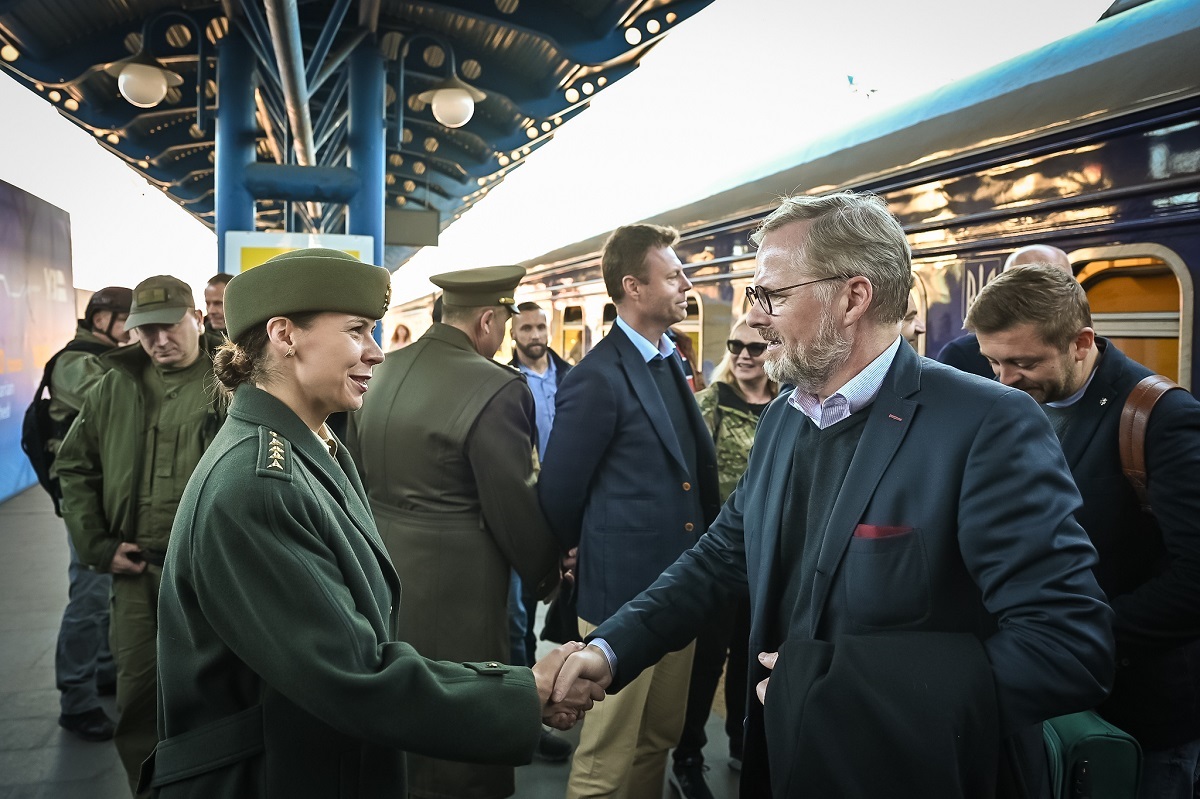 Prime Minister Petr Fiala and other members of the government arrived in Kyiv on 31 October. Photo credit: vlada.cz.

Both PMs expressed satisfaction with the results of the joint meeting, attended by three Czech deputy prime ministers and another four ministers. Fiala (ODS) invited the Ukrainian government to Prague in 2023.

Shmyhal stressed the importance of the arrival of Czech ministers, which had been slowed by explosions in the Kyiv area. Russian missiles were yesterday again targeting civilian infrastructure in the Ukrainian capital.

“Despite such a top visit from the state that is currently presiding over the EU, the Russian aggressor continued in its strategy of destruction and liquidation of civilian targets,” said Shmyhal.

The Czech ministers’ visit to Kyiv during one of the most complicated periods in Ukrainian history is an expression of immense solidarity and support, said Shmyhal.

Fiala said that the visit was to show that Ukraine is not alone. “We understand the importance of its fight and are prepared to do our utmost to enable life to continue as normally as possible in Ukraine even in these hard conditions,” he added.

The talks were extremely efficient in spite of the persistent Russian aggression, Shmyhal added.

The joint talks resulted in the signing of the memorandum on cooperation between the countries’ foreign affairs ministries and governments to support economic and political dialogue between Ukraine and the Czech Republic. In a joint statement, both countries also supported further deepening of sanctions against Russia.

Fiala called the continuation of military and humanitarian support for Ukraine natural and automatic, with the aim of restoring the territorial integrity of the country.

Most recently, the Czech government earmarked CZK 20 million for the purchase of oil generators to help tackle power outages after the Russian attacks in the Dnipropetrovsk and Lviv provinces.

The Czech Republic has so far provided aid worth CZK 4.5 billion to Ukraine.

Shmyhal mentioned the DANA howitzers, tanks and armoured carriers, saying they are working very well on the front line and helping to liberate Ukraine. “We are preparing other unpleasant things for the invaders,” he added.

Fiala said it was in the interests of the Czech Republic, Ukraine, Europe and the whole world that Ukraine should have enough equipment for its defence, and can defend itself efficiently.

Fiala also said he appreciated Ukraine’s interest in the services of Czech firms during its reconstruction, and the intention to support the entry of Czech businesses to its market. “This is no unilateral aid, but deep cooperation,” Fiala added.

Moreover, Shmyhal said the Czech government backs the establishment of a tribunal to deal with Russian crimes committed in Ukrainian territory, as well as the trials of the Russian political and military commanders issuing the orders.