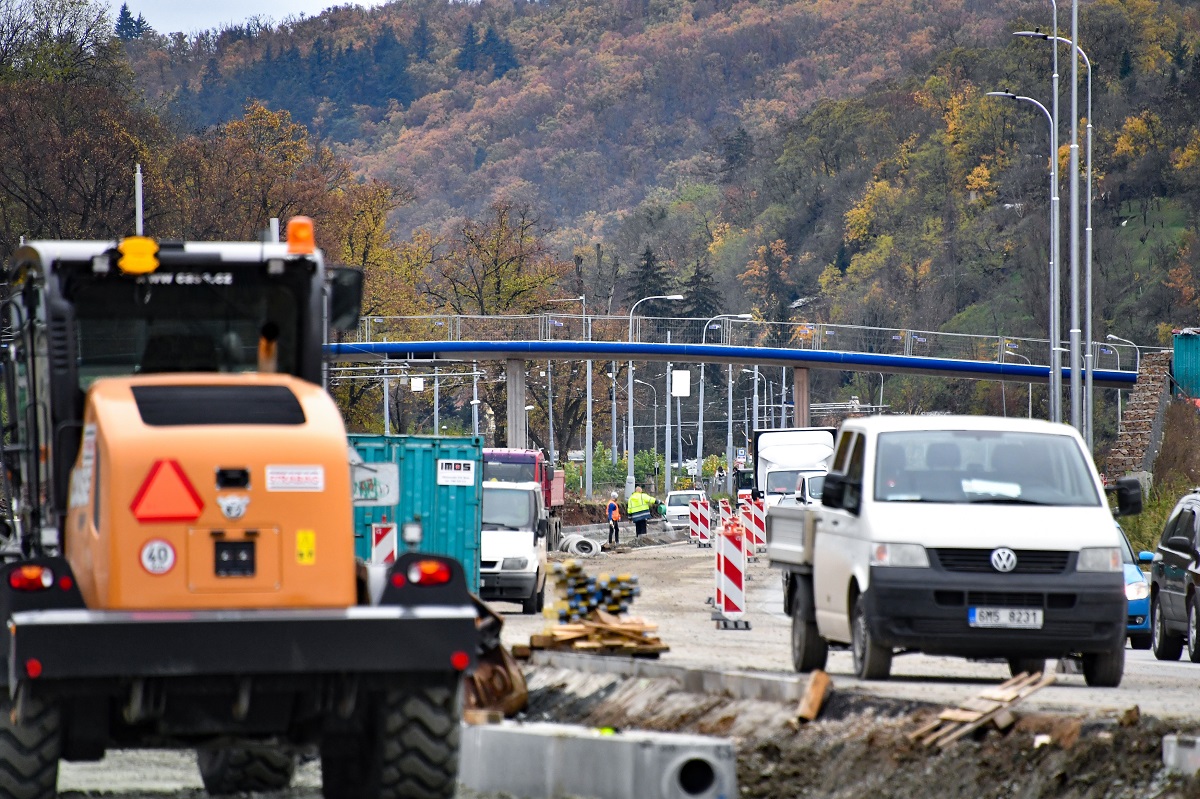 The construction of the Greater City Ring Road (VMO) Žabovřeská is moving to the second stage. The agreement with the contractor was signed on Tuesday. The second stage will involve work between the Kamenomlýnský Bridge and the Hlinka level crossing, as well as the excavation of a tunnel and the relocation of the tram line which will pass through it. The site will be handed over to the contractor by the end of this year. Photo credit: MMB Archive.

Brno, Nov 8 (BD) – Mayor of Brno Markéta Vaňková gave an update on the progress of the project so far: “In the first stage, work took place on the section between the two bridges: Kamenomlýnský and Kníničský. The aim was to create a four-lane road layout here to avoid the traffic jams we have known in this section. It was also necessary to build an accompanying road and footbridge over Žabovřeská, allowing pedestrians to avoid a dangerous crossing of a congested road. One half of the road is completed and the other half should be operational by the end of the year, maybe by December 17th, with the overall completion of the first phase planned for next spring.”

In the coming weeks, the second stage of construction of the ring road on Žabovřeská should begin. The winning contractor is a partnership between the firms Eurovia, Hochtief, and Subterra. On Tuesday, the contractors signed an agreement with the city and the Czech Directorate of Roads and Motorways. The tender competition was repeated after an intervention by the Anti-Monopoly Office in the spring. The construction site will be handed over to the contractor by the end of this year, and the construction should then last 194 weeks, according to the contract, possibly ending in the summer of 2024.

“The second stage begins at the Kamenomlýnský Bridge. Due to the narrow space, it is necessary to relocate the tram line in this section into a 500-metre tunnel. Moving the track will provide enough space for the construction of a four-lane road to Pisárky. A footbridge will also be constructed. From our point of view, with regard to the composition of buildings and the landscape of the area, this is a very demanding construction project, technically and logistically,” said David Fiala, director of the Brno branch of the Directorate of Roads and Motorways. Drivers will in most cases be limited to one lane, he added: “With few exceptions, the road traffic management will continue to be in the 1+1 regime, as was the case in the current part of the construction.”

Compared to the original plans, the construction of the second stage will be significantly accelerated by the closure of tram line 1, which will last for up to two years. Alternative public transport will run via Veveří. Only the Stránského and Bráfova stops will be in operation in the affected section. “We anticipate that the closure of the tram line from Lesnická will begin in January 2021. The exact date is still under negotiation, and will be finalised when the contractor submits their final schedule after signing the contract,” added Vaňková .

The total cost of the construction is CZK 2.035 billion, of which approximately CZK 121 million will be paid by the city. 33 construction objects will be financed from the Brno budget, mainly improving access to the area in the form of adjacent roads and sidewalks and other improvements to pedestrian routes. A footbridge will cross the sidewalk over the road I / 42 and the Pisárky–Komín tram line, thus connecting Wilsonův les and the left bank of the river Svratka. Stage II of the project will also see the massive planting of greenery and other adjustments of vegetation, at a cost of just over CZK 13 million, as well as the renovation of a neo-Gothic chapel from 1884, which was declared a cultural monument in 2015.

https://brnodaily.com/2020/11/08/brno/brnos-greater-city-ring-road-project-moving-towards-stage-ii/https://brnodaily.com/wp-content/uploads/2020/11/MMB-construction-ring-road-zabovreska-credit-Z.-Kolarik-6-1024x682.jpghttps://brnodaily.com/wp-content/uploads/2020/11/MMB-construction-ring-road-zabovreska-credit-Z.-Kolarik-6-150x100.jpg2020-11-08T09:21:03+01:00Jack StephensBrnoNewsBrno,News,TransportThe construction of the Greater City Ring Road (VMO) Žabovřeská is moving to the second stage. The agreement with the contractor was signed on Tuesday. The second stage will involve work between the Kamenomlýnský Bridge and the Hlinka level crossing, as well as the excavation of a tunnel and...Jack Stephens jack.stephens50@gmail.comAuthorA writer and English teacher originally from London who has lived in Brno since 2011, interested in politics, low culture, and all things strange and/or Czech.Brno Daily

A writer and English teacher originally from London who has lived in Brno since 2011, interested in politics, low culture, and all things strange and/or Czech.
View all posts by Jack Stephens →
« Czech Government Draws Up Plan to Tackle Impact of the Pandemic on Mental Health
Research and Development On The Rise in Czech Republic »