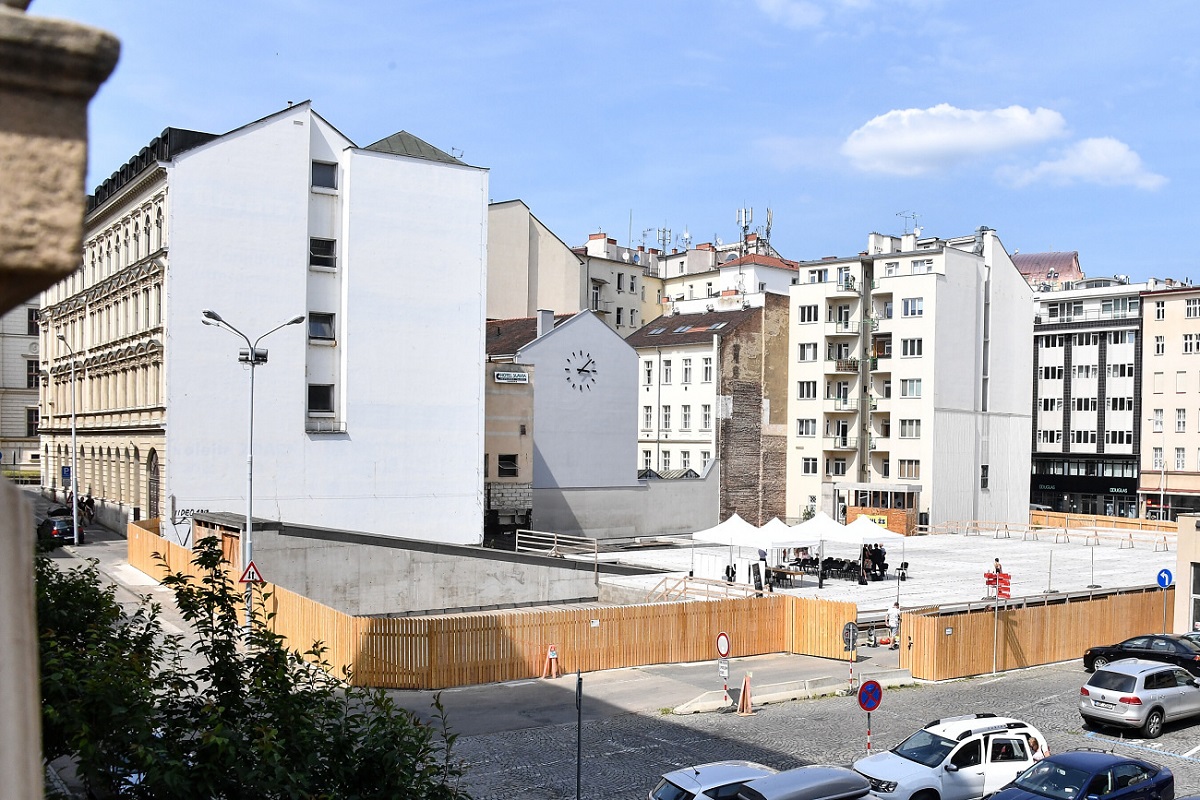 The claimants, Atelier M1 Architects, were suing the city for infringing the licence agreement, but a deal has now been reached with the studio that will allow the project to continue. Photo credit: MMB.

Brno, June 20 (BD) — Following an international architecture competition launched in 2002 for the design of a long-awaited new concert hall for Brno, Atelier M1 Architects, with a design by Jakub Havlas, Jan Hájek and Pavel Joba, were unanimously selected as the winning entry. The competition was followed by a feasibility study, and planning permission was granted in 2013, with documentation prepared by M1. Construction of the first stage of the project was completed between 2015 and 2017, consisting of a three-floor underground car park and structural preparations for the further stages of the project.

In 2016, a tender was announced for preparation of the planning documentation for the second stage of the project, the overground structure including the concert hall. This was won by the team of Tomasz Konior (general designer), Yasuhisa Toyota (main acoustic designer) and Petr Hrůša (construction designer), who presented their design for the future concert hall in September 2018, adapting the original plans. M1, the designers of the original plans, were unhappy with the changes, and sued the city a few days later for infringing the license agreement.

The new city leadership following the October 2018 elections opened negotiations with the architect studio, which in February 2019 resulted in agreement on the conditions under which M1 would take back the case, resulting in this week’s Settlement Agreement, which has already been signed by the architects and awaits approval by the City Assembly. M1 will from now on be consulted on every step of the project including any changes to their original design.

Marek Fišer (Piráti), Council Member for Culture, explained the terms of the agreement: “I am very glad that we have managed to negotiate the terms, of which there are three main points, in our view. The original designers will contribute to finding a suitable architectural and structural solution so that spectators’ views are not obstructed by the columns, with a priority of maintaining the highest sound quality in the concert hall. We have also agreed that the technological center should be placed outside the building, and also on the conditions for the planting of new greenery in the space in front of the centre.”

https://brnodaily.com/2019/06/20/news/agreement-reached-over-legal-dispute-blocking-construction-of-new-janacek-cultural-centre/https://brnodaily.com/wp-content/uploads/2019/06/tisk_konfer_JKC_foto_sch062CrMMB-1024x683.jpghttps://brnodaily.com/wp-content/uploads/2019/06/tisk_konfer_JKC_foto_sch062CrMMB-150x100.jpg2019-06-20T07:24:44+02:00Jack StephensCzech Republic / WorldArchitecture,Brno,Czech Republic,Music,News,Urban PlansThe claimants, Atelier M1 Architects, were suing the city for infringing the licence agreement, but a deal has now been reached with the studio that will allow the project to continue. Photo credit: MMB. Brno, June 20 (BD) — Following an international architecture competition launched in 2002 for the design...Jack Stephens jack.stephens50@gmail.comAuthorA writer and English teacher originally from London who has lived in Brno since 2011, interested in politics, low culture, and all things strange and/or Czech.Brno Daily

A writer and English teacher originally from London who has lived in Brno since 2011, interested in politics, low culture, and all things strange and/or Czech.
View all posts by Jack Stephens →
« Council Approves New Cycle Path Connecting Veveří Castle and Rakovec
Movie Shooting & Free Concert at Zelny Trh Today »