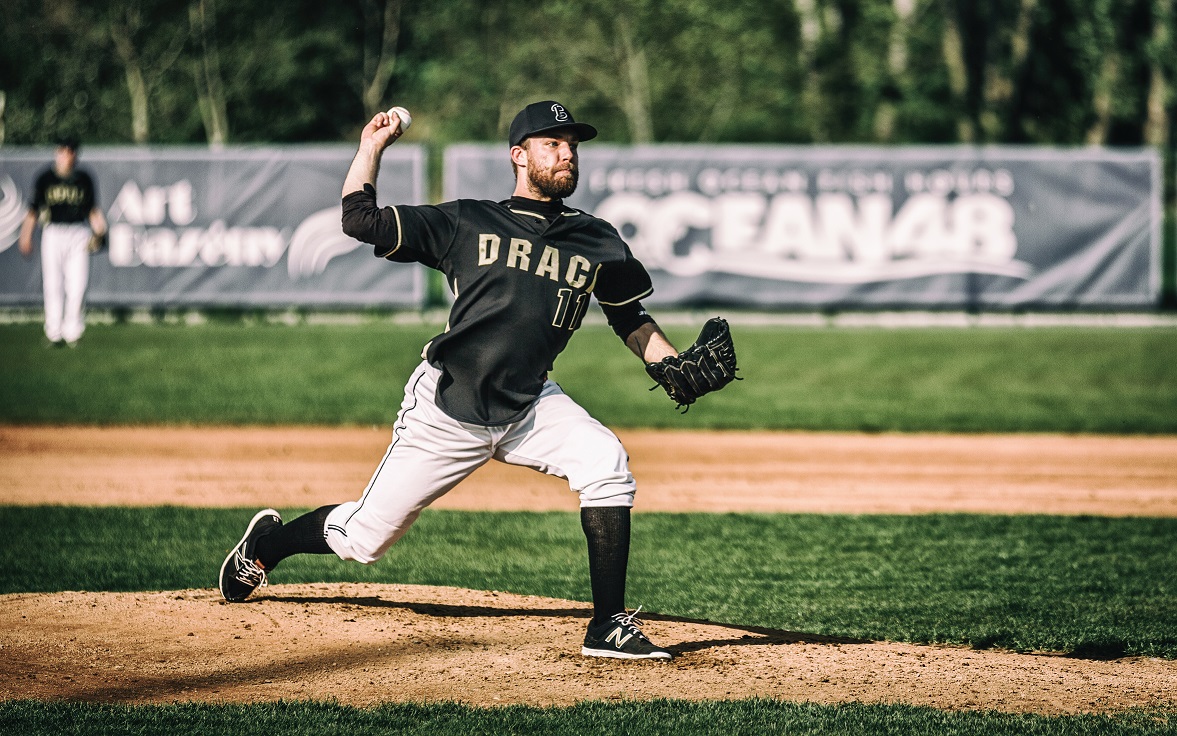 Radim Chroust is a perfect 6-0 this season as Draci Brno fight to get into the postseason. Photo credit: Draci Brno.

Three weekends remain in the Top6 phase of the extraliga baseball season so the battle for postseason spots has intensified.

Unlike most years, Draci Brno are not atop the standings and the 21-time champions do not have a direct line to their 25th consecutive Czech Series. This year, most likely, they will have to fight simply to get into the Wildcard series.

Cardio Hroši Brno are in tough, too.

Only three teams will make the postseason. The top seed proceeds directly to the Czech Series. The best-of-three Wildcard series — between the second- and third-place teams in the final Top6 standings — is scheduled for Aug 2-4; the winner will advance to the best-of-five Czech Series, which will be played over two weekends, Aug. 16-18 and 23-25. The postseason is earlier this year to make room for several national-team tournaments, through which the Czech Republic hopes to make it to the Tokyo 2020 Summer Olympics.

The Draci won two of three games against Tempo Prague last weekend. The first was a 3-0 pitching gem started by Peter Moylan. The Major League Baseball veteran is shifting from a reliever to a starter pitcher in order to try to help his native Australia into the 2020 Summer Olympics. Moylan gave up five hits and struck out seven during six shutout innings on Friday night.

The Draci won again on Saturday afternoon in South Brno, 7-6, but they used seven pitchers (partly to provide playing time). Radim Chroust allowed an earned run in five innings, but his team lost the lead after giving up four runs in the top of the ninth and eventually got the winner because of sloppy Prague defensive play in the bottom of the ninth.

On Sunday, when the series moved to Prague for a game, the Tempo offense put up five runs in the bottom of the first inning and maintained a comfortable lead to win their first game in the Top6, 11-4.

The Draci play three important games against league-leaders Eagles Praha this weekend: at home on Friday (7 p.m.) and Saturday (2 p.m.) and in Prague on Sunday (2 p.m.)

Hroši Brno lost all three of its games to Eagles Praha last weekend and the schedule doesn’t get any easier this weekend with three games against Arrows Ostrava, starting away on Friday (7 p.m. first pitch) and then in Brno on Saturday (4 p.m.) and Sunday (11 a.m.).

The final two weekends are a quick run through the rest of the league so that each team will have four games against each other within the Top6 phase. The Draci will play on the road for four of the five final games: Friday, July 19 at Eagles Praha (7 p.m.); Saturday, July 20 at Kotlářka Praha (2 p.m.); Sunday, July 21 at Cardion Hroši Brno (5 p.m.); Friday, July 26 at Tempo Praha (5 p.m.); and Saturday, July 27 at home against Arrows Ostrava (2 p.m.)

With the long and hot days, the cricket season in the Czech Republic turns to the longer format when the T40 season begins this weekend.

Brno CC – 1st XI begins at home when they host Vinohrady CC 1st XI on Saturday at 11:30 a.m. The season continues through September.

Brno finished second in both the first and second divisions of the T20 seasons.

According to the Fortuna: Narodni Liga website, FC Zbrojovka begins it second season in the league on Friday, July 19 at 6 p.m. at FC Sellier & Bellot Vlašim.

SK Líšeň begins its first season in the league on the following day, Saturday, July 20, at home against FK Varnsdorf. Kick off is 5 p.m.

Longtime HC Kometa player Leoš Čermák hung up his skates last week after a long career. The captain during the back-to-back championship seasons in 2016-17 and 2017-18 played for the team since 2011.

Čermák, 41, will continue with the team as a player development manager for youth teams. He will also help his wife in Třebíč, his hometown, at their wedding salon.

Čermák brought an immediate intensity to the team — earning the ignominious title as the most-penalized player in the league in his first season — as he led the team, which was newly promoted to the extraliga, to an underdog berth in the championship series and a runner-up finish to Pardubice.

In all, he was a central part of the team’s resurgence, playing a leadership role for two titles, two second-place finishes and a third-place finish. He played a total of 823 extraliga games, including 471 for the Kometa. He also played several season in Russia and 33 games for the national team, scoring 10 goals and getting nine assists.

The schedule for the men’s basketball league was posted to nbl.cz earlier this week. To see the entire schedule, click here. All dates and times are tentative.

The regular season has 22 rounds, with each of the 12 teams playing each other at home and away through the end of January 2020.

A connoisseur of the unpredictable and unscripted drama of sports.
View all posts by Bruno Zalubil →
« Janáček Theater Cordons Off the Area to Prevent Further Damage, While Brno Releases Set of Rules
Sting’s Concert at Slavkov u Brna Cancelled Due to Illness »