MENDELU Scientists Build Smart Bins Which Know When They’re Full.. And If They’re On Fire 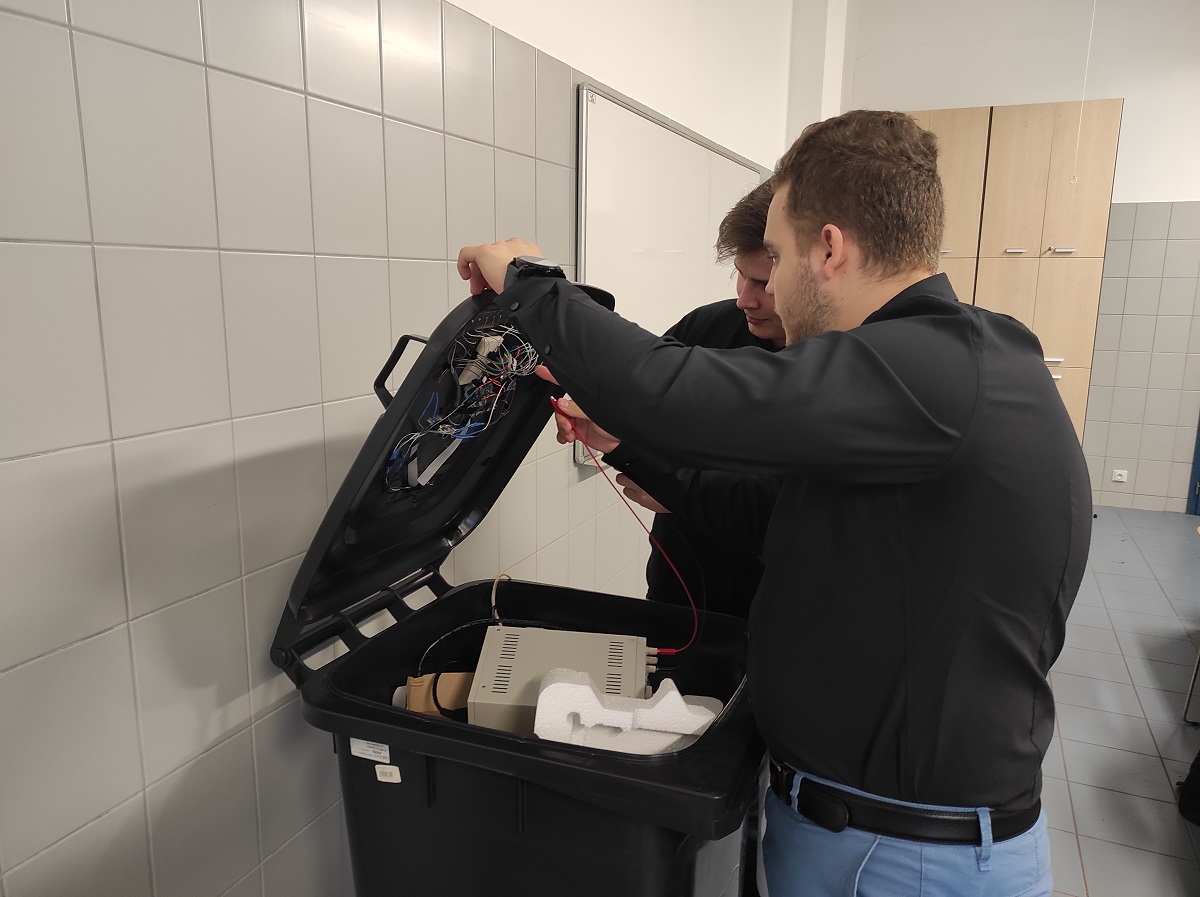 The black bins initially appear no different from those normally seen on the street. Photo credit: MENDELU.

Brno, Dec 15 (BD) – Scientists from Brno’s Mendel University (MENDELU) are developing so-called “smart bins”, adapted to the specific needs of cities, municipalities and companies. Some of the desired features include the ability to be tracked using GPS, or to report when they catch fire. In the laboratory, there is currently a demo version of a smart waste bin that uses sensors to know when it is full and needs to be emptied, and can notify the operator.

Apart from a few flashing sensors and a small display, the black bin in the laboratory at MENDELU’s Faculty of Agriculture appears no different from those normally seen on the street. However, thanks to the connection of special sensors, the container can report remotely that it is full and needs to be emptied in the next waste collection.

“It works on the principle of scanning the interior of the dustbin with the help of an ultrasonic sensor,” explained Jan Janča, a member of the research team and a student at the MENDELU Faculty of Business Economics. “It sends ultrasonic waves into the dustbin, which are reflected, and the sensor calculates the distance from the bottom of the dustbin to its lid based on the time of flight.”

Information about how much free space is left is then displayed on the bin and can also be shared to cloud storage. “For example, it is difficult for some companies to get their new drivers to learn established routes quickly. The goal is for employees to be able to just get into a pickup truck, and the system will automatically work out a GPS route to collect all the full bins in, for example, a city district,” said head of research Vlastimil Slaný from the Institute of Agricultural, Food and Environmental Technology, part of the MENDELU Agricultural Faculty.

The system could not only assist the work of companies, but also make residents more comfortable. “It happens that, for example, during Christmas and other important holidays, collection points are suddenly overflowing. City employees usually have to go around the place themselves and order special pickups. This technology could make it easier for them,” added Slaný.

The researchers have discussed the implementation of GPS technology with the waste management firm Suez, who in turn entered negotiations with the city of Boskovice about equipping dustbins with temperature sensors. “This is fire prevention. If you imagine a typical bin somewhere on a post in the square, it is often supplemented with an ashtray, and it can happen that the end of the cigarette catches fire. The sensor warns of the problem in time, and the city can react before the burning trash sets light to something nearby,” explained Slaný.

Tracking the location using GPS can also prevent the theft of containers with paper or electrical waste. Bins can also report their weight. “However, we must realise that the more sensors we have, the greater the energy consumption,” added Slaný. “So what we are dealing with is the power options, as we need a sufficiently sized battery that can handle temperature fluctuations in winter and summer.”

Slaný’s team also includes a large number of students, not only from his own Faculty of Agriculture, but also from the Faculty of Business Economics. “Our goal is to gather students who are already interested in science and research during their studies and involve them in projects as much as possible,” he said.

https://brnodaily.com/2022/12/15/brno/mendelu-scientists-build-smart-bins-which-know-when-theyre-full-and-if-theyre-on-fire/https://brnodaily.com/wp-content/uploads/2022/12/1670510797334-1024x765.jpghttps://brnodaily.com/wp-content/uploads/2022/12/1670510797334-150x112.jpg2022-12-15T07:44:10+01:00Jack StephensBrnoNewsBrno,NewsThe black bins initially appear no different from those normally seen on the street. Photo credit: MENDELU. Brno, Dec 15 (BD) - Scientists from Brno’s Mendel University (MENDELU) are developing so-called “smart bins”, adapted to the specific needs of cities, municipalities and companies. Some of the desired features include the...Jack Stephens jack.stephens50@gmail.comAuthorA writer and English teacher originally from London who has lived in Brno since 2011, interested in politics, low culture, and all things strange and/or Czech.Brno Daily

A writer and English teacher originally from London who has lived in Brno since 2011, interested in politics, low culture, and all things strange and/or Czech.
View all posts by Jack Stephens →
« Czech Republic Still Has a 24% Gender Pay Gap, Including 12% Pay Difference For The Same Work
Brno Supports 25 Talented Scientists With Ph.D. Scholarship Programme »