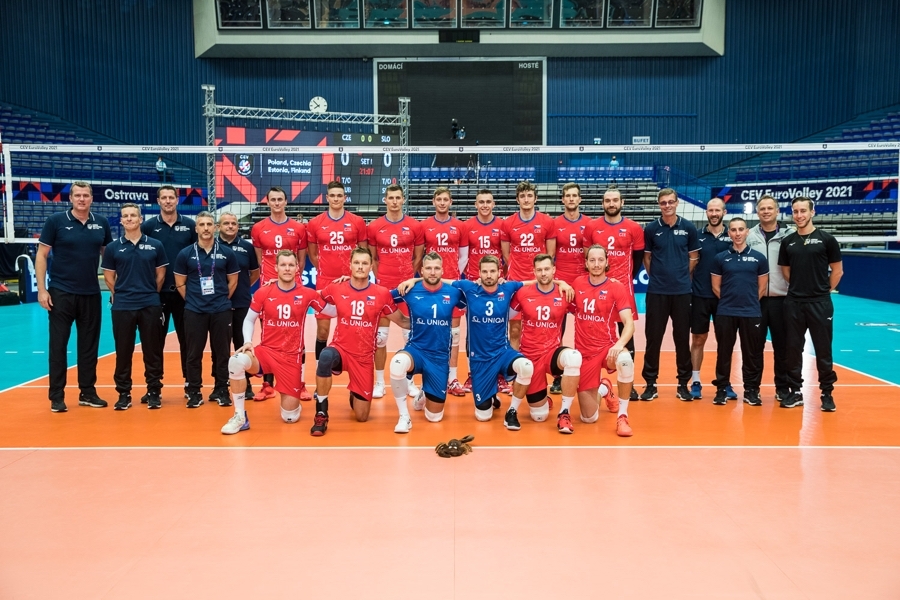 After 18 years, the Czech Republic managed to win the title by defeating favourites Turkiye in the final, who had dominated the last two editions. Photo Credit: cvf.cz

Czech Republic, June 21 (BD) – The match was played over four sets, with the Czech Republic prevailing 3:1. It was far from an easy match for the Czech team, which was seen as the underdog and only managed to avoid the tie-break in the final points of the fourth set. The set breakdowns were 25:21, 25:22, 21:25 and 27:25

In the first set, the Czech Republic managed to dominate, preventing Turkiye from developing their game. In the second set, however, Jiří Novák’s team had problems serving, and fast attack combinations were difficult to defend. The reigning champions led most of the set, up 21-17 at one point. After the last break, however, the Czech Republic fought back to win the tought set 23-21, with a great demonstration of character. The Turkish side did not give up, fighting the third set point to point and challenging the Czech lead.

In the fourth set, the Czech team again had the upper hand, leading 16:12, before a series of mistakes allowed the Turks to take a 23-22 lead. However, the Czechs did not allow a tie-break, regaining a narrow lead, and when right-hander Adam Zajíček sent the ball over the net with an unconventional left hand, they had their third match point. Martin Licek converted it with an ace over the tape. “It’s beautiful, what more can I say. I’m happy that I made it today and got the gold,” he told the media following the final in Croatia.

Coach Jiří Novák commended his team for their quality and energy. “Of course, we made some silly mistakes, but I am surprised that we were slightly superior to Turkiye today. This team always surprises me. Compared to the European Championships we are missing five players, yet this team is still going strong and playing well.”

Captain Adam Zajicek said the victory was among his greatest achievements. “Titles are titles, but that’s at the level of the club, I have yet to win a gold with the national team. Every gold medal I have won has a story. This is again one of those unique ones, where the season was tough and after various setbacks came this one. I am very happy,” he said.

The Czech team will have an opportunity to compete in the Challenger Cup, which is a qualification competition for the elite Nations League. Korea will host the men’s tournament at the end of July.

https://brnodaily.com/2022/06/21/news/czech-national-team-wins-in-croatia-to-become-european-volleyball-league-champion/https://brnodaily.com/wp-content/uploads/2022/06/National-volleyball-team-Czech-credit-cvf.cz_.jpghttps://brnodaily.com/wp-content/uploads/2022/06/National-volleyball-team-Czech-credit-cvf.cz_-150x100.jpg2022-06-21T11:00:17+02:00Ilaria BriziCzech Republic / WorldCzech Republic,European League Champion,Sport,VolleyAfter 18 years, the Czech Republic managed to win the title by defeating favourites Turkiye in the final, who had dominated the last two editions. Photo Credit: cvf.cz Czech Republic, June 21 (BD) - The match was played over four sets, with the Czech Republic prevailing 3:1. It was far...Ilaria Brizi ilabrizi12@gmail.comAuthorItalian girl with a master’s degree in marketing and advertising. I love travelling, reading, writing, listening to music, but most of all I love having breakfast. Against cheese on tuna pasta.Brno Daily

Italian girl with a master’s degree in marketing and advertising. I love travelling, reading, writing, listening to music, but most of all I love having breakfast. Against cheese on tuna pasta.
View all posts by Ilaria Brizi →
« Brno’s World-Leading Electron Microscopy Industry Continues Developing Fast
New Start iD App Will Help South Moravian Students Find Part-Time Jobs, Internships or Apprenticeships »