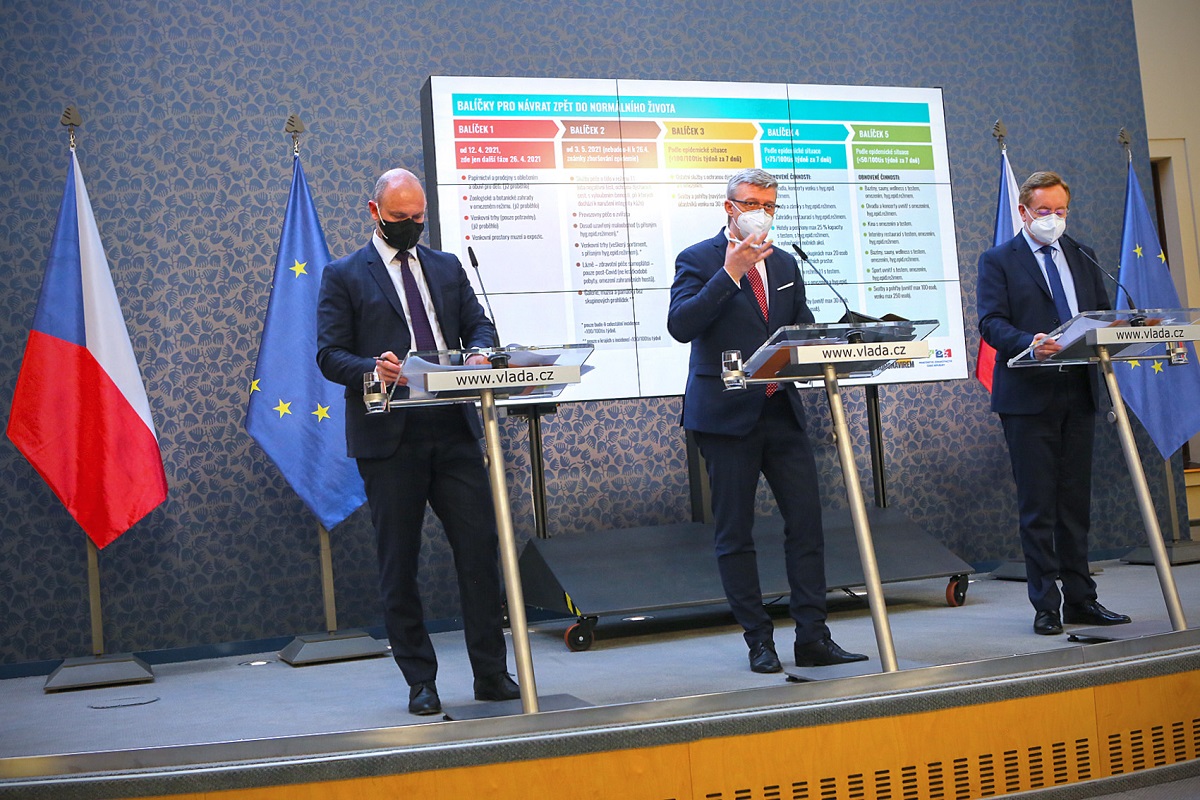 The Czech government has announced that the remaining shops will open on May 3rd, assuming a continuation of current favourable trends in the epidemiological situation, along with markets and certain services. A new “package” system will guide future reopening, based on the ongoing incidence of new cases. Credit: vlada.cz

Czech Rep., Apr 22 (BD) – At a meeting today, the Czech government approved a schedule for the reopening of shops, markets, and certain services on May 3rd, assuming that the epidemiological situation in the country continues to improve.

“If the favorable trend of the epidemic continues, on May 3rd we will release the rest of the shops, markets and, under strict hygiene conditions, selected services related to body care, animal care, and spa health care. At the same time, the gradual release of kindergartens and schools will continue,” said Karel Havlíček (ANO), Minister of Trade and Industry.

In regions where the number of newly confirmed cases is below 100 per 100,000, museums, monuments and galleries will also be allowed to open, though without group tours. This currently applies to the Karlovy Vary, Hradec Králové and Plzeň regions, where kindergartens will reopen normally on April 26th, without masks or testing.

The plans form the second “package” of a new plan of reopening, consisting of six packages in total. The first package was last week’s reopening of a limited selection of shops and services including shops selling children’s shoes and clothes. No timeframe was mentioned for the third or later packages, whose implementation will depend on the development of the epidemiological situation. The schedule of releasing will be announced each Monday for the following Monday, and confirmed on the Thursday of that week. Restaurant gardens, theatres, and open-air concerts are in the fourth package.

In other developments today, the Supreme Administrative Court annulled all of the Ministry of Health’s extraordinary measures including the restrictions on the operation of shops and services, and limits on gatherings of people. However, the decision will only come into effect after a delay of four days. Health Minister Petr Arenberger (ANO) said that the Ministry will replace the measures, taking the judges’ decision into account: “This was mainly a procedural defect, which was supposedly that we did not sufficiently explain why we issued this extraordinary measure before the government had decided.” He added that certain measures would be left out of the replacement version.

According to the Ministry of Health, 2,942 new infections were detected on Wednesday, 772 less than a week earlier, a continuation of the sharp downward trend seen recently. However, the reproduction number R has risen for the fourth day in a row, to 0.85.

https://brnodaily.com/2021/04/22/news/shops-markets-and-hairdressers-to-reopen-from-may-3rd/https://brnodaily.com/wp-content/uploads/2021/04/Press-conference-april-22-havlicek-vlada.cz_-1024x683.jpghttps://brnodaily.com/wp-content/uploads/2021/04/Press-conference-april-22-havlicek-vlada.cz_-150x100.jpg2021-04-22T18:57:00+02:00Jack StephensBreaking NewsCzech Republic / WorldCoronavirus,Czech Republic,Politics,ShoppingThe Czech government has announced that the remaining shops will open on May 3rd, assuming a continuation of current favourable trends in the epidemiological situation, along with markets and certain services. A new “package” system will guide future reopening, based on the ongoing incidence of new cases. Credit: vlada.cz...Jack Stephens jack.stephens50@gmail.comAuthorA writer and English teacher originally from London who has lived in Brno since 2011, interested in politics, low culture, and all things strange and/or Czech.Brno Daily

A writer and English teacher originally from London who has lived in Brno since 2011, interested in politics, low culture, and all things strange and/or Czech.
View all posts by Jack Stephens →
« Five Czechs Detained On Suspicion Of Terrorist Activity In Ukraine
Czech Republic Ranks 40th In Freedom of Press, Amid Global Deterioration »