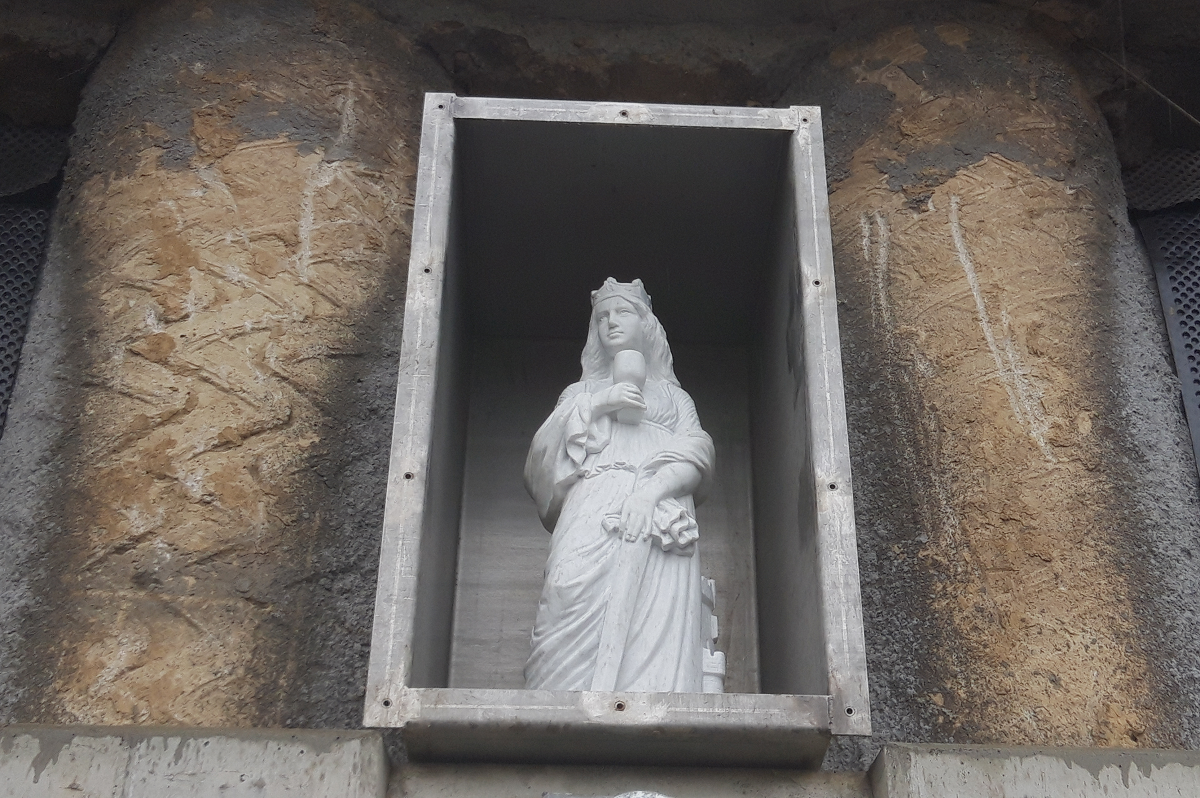 As the extension of the Brno tram network to Kampus Bohunice reaches the halfway point of its construction, the entrance of the tunnel on Netroufalky has been adorned with a statue of St. Barbara. The statue was blessed by Bishop Vojtěch Cikrle in a small ceremony. Photo Credit: DPMB.

Czech Rep., Apr 17 (BD) – The entrance of the new tram tunnel on Netroufalky will be watched over by a statue of St. Barbara, the patron saint of mining constructions. The statue was blessed by Bishop Vojtěch Cikrle in a recent ceremony, half-way through the construction of the tram line extension, expected to be completed by the end of 2022. The Bishop was accompanied by Brno’s Mayor Markéta Vaňková and representatives of the transport and construction companies.

The short ceremony involved the transport of the statue from the church to its final destination, where it was unveiled and blessed by the Bishop, who commented on the pertinence of St. Barbara’s image for the location: “I was sincerely pleased with the initiative of the Brno Transport Company to place a statue of St. Barbara on the tram line, who is considered to be the patron saint of mining constructions. Our ancestors built statues of saints along the way – and it was of great importance to their lives. They admired God’s work in people who were able to live with him and manage their life situations. Today, there are unavoidable advertisements along the way that advise us what to buy, how to use cosmetics, how to brush our teeth… Statues of saints were and are advertisements on how to live. May St. Barbara accompany all those who ask her for intercession in difficult life situations.”

The statue was created from Italian marble from the Carrara area, by employees of the Komárek Stone Industry in Letovice in collaboration with sculptor Albert Soto. While blessings are not unusual, it was the first time that a tram line statue had received the blessing of the Bishop of Brno.

The tram line will connect the stop at Osová with the University Campus, and is one of the city’s most ambitious current projects, as Vaňková confirmed: “The construction of a tram line to the University campus is unique in several respects. In the whole of the Czech Republic, it is the largest project in the last ten years, which is being developed in a built-up part of the city. The amount of the subsidy that we managed to obtain from European funds exceeds CZK one billion, and will cover 85 percent of the costs. Most importantly, however, it benefits the residents, making it easier to travel to the University Campus area, where more than 40,000 people go every day, whether to study or work. Passengers will be able to get there from the city center in 15 minutes.”

https://brnodaily.com/2021/04/17/brno/statue-of-st-barbara-to-watch-over-extension-of-tram-line/https://brnodaily.com/wp-content/uploads/2021/04/Brno-statue-of-St.-Barbara-tram-line-DPMB-1024x681.pnghttps://brnodaily.com/wp-content/uploads/2021/04/Brno-statue-of-St.-Barbara-tram-line-DPMB-150x100.png2021-04-17T14:41:37+02:00Ines RibasBrnoBrno,News,Tram,TransportAs the extension of the Brno tram network to Kampus Bohunice reaches the halfway point of its construction, the entrance of the tunnel on Netroufalky has been adorned with a statue of St. Barbara. The statue was blessed by Bishop Vojtěch Cikrle in a small ceremony. Photo Credit: DPMB.Czech...Ines RibasInês Ribasines.ribas.f.d@gmail.comAuthorPortuguese aspiring writer, bachelor of History and master's student of European Politics. Always sarcastic, sometimes funny. Enthusiastic about old book shops and espressos.Brno Daily