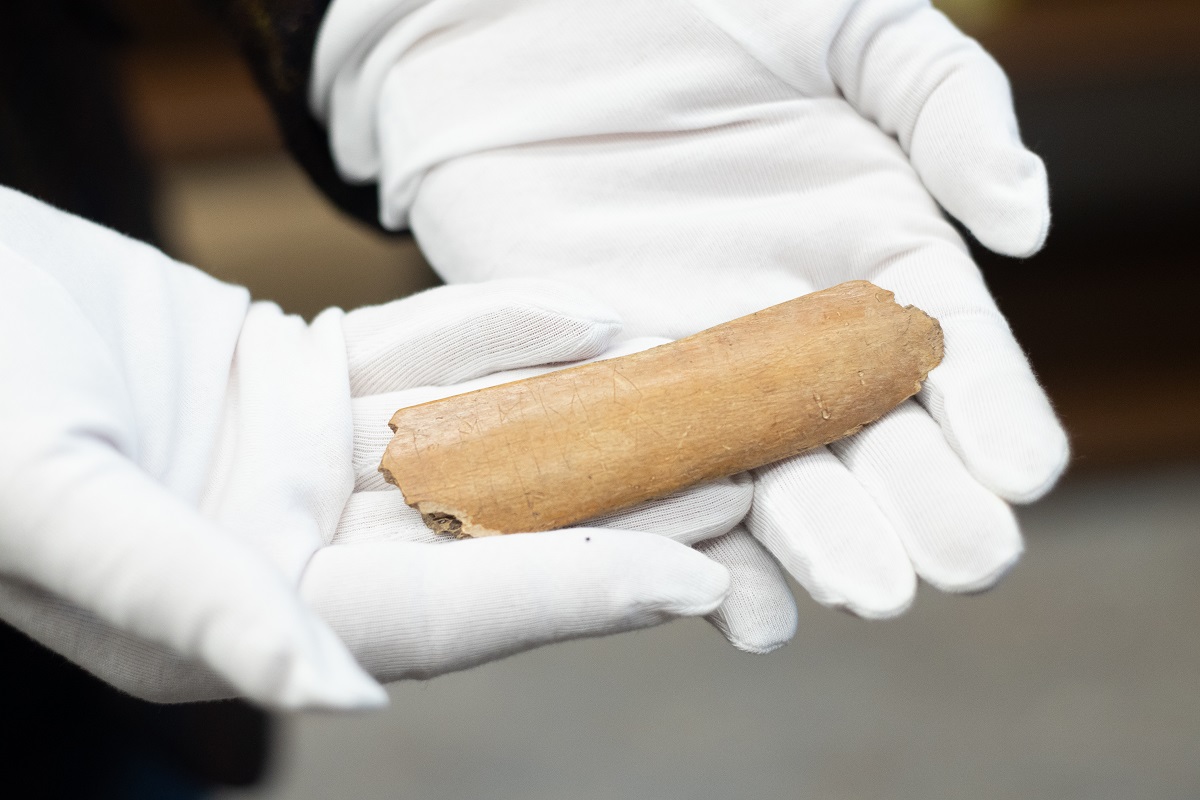 A team of international researchers and archaeologists from Masaryk University have uncovered evidence that an ancient Germanic language may have been used by the Slavs as early as 600 AD, thanks to the discovery of a bone with carvings of Germanic runes near Břeclav. The Glagolitic script from the 9th century AD was previously believed to be the earliest writing system of the Slavs. Photo credit: MUNI.

Brno, Feb 11 (BD) – Archaeologists from Brno’s Masaryk University (MUNI) have discovered a unique artefact which may be evidence of the earliest writing system amongst Early Slavs. The archaeologists found an animal rib with inscriptions carved into it at the Lány-Břeclav site in South Moravia. A curious feature of the bone is that it is inscribed with Germanic runes, rather than the Glagolitic script which was previously considered to be the first writing system used by Slavs.

“The inscribed bone we excavated in 2017 was studied by an international team of researchers from the Czech Republic, Austria, Switzerland, and Australia, who found it to be the oldest inscription by Slavs ever discovered. This is a major discovery of not just national significance but of European importance,” said Jiří Macháček, Head of the Department of Archaeology and Museology at MUNI.

The inscriptions were identified as older Futhark by Robert Nedoma from the University of Vienna, an expert in Germanic languages. Older Futhark was used by Germanic-speaking inhabitants of Central Europe from the 2nd to the 7th century AD. The alphabet of this ancient language is made up of 24 letters, the seven last of which were carved into the bone that was found. The artefact appears to have been a learning aid, and is a rare find; European scientists know of only 17 preserved examples of complete or partial inscriptions of older Futhark.

The artefact was analysed using the latest genetic and radiocarbon dating methods and the age of the inscription was determined through use-wear analysis and electron scanning microscopy. “These sensitive analyses revealed the bone to be that of cattle which lived in approximately 600 AD,” said specialist Zuzana Hofmanová, a member of the team from the University of Fribourg in Switzerland.

The oldest writing system used by Slavs was believed to be the Glagolitic script, introduced to Moravia during the Byzantine Empire in the 9th century AD by Saints Constantine and Methodius. ‘‘The fact that it is the earliest evidence of writing among Slavs is certainly interesting for the nearly 300 million people who speak Slavic languages,” added Macháček.

In modern times, old Germanic runes are associated with Germanic mythology which people may recognise from fantasy films and books such as ‘The Lord of the Rings’, or from PC games. The Lány runes will be exhibited to the public at Masaryk University.

https://brnodaily.com/2021/02/11/culture/brno-archaeologists-reveal-early-slavs-used-germanic-runes-in-oldest-script/https://brnodaily.com/wp-content/uploads/2021/02/history-archaeology-bone-germanic-language-credit-Masaryk-University-5-1024x683.jpghttps://brnodaily.com/wp-content/uploads/2021/02/history-archaeology-bone-germanic-language-credit-Masaryk-University-5-150x100.jpg2021-02-11T14:42:42+01:00Kim BingelArt & CultureBrnoArchaeology,Brno,Culture,History,Masaryk University,Science,South MoraviaA team of international researchers and archaeologists from Masaryk University have uncovered evidence that an ancient Germanic language may have been used by the Slavs as early as 600 AD, thanks to the discovery of a bone with carvings of Germanic runes near Břeclav. The Glagolitic script from the...Kim BingelKim Bingelkjbingel@gmail.comAuthorSouth African in Brno. Independent international traveller. Enjoys nature and a sustainable lifestyle.Brno Daily

South African in Brno. Independent international traveller. Enjoys nature and a sustainable lifestyle.
View all posts by Kim Bingel →
« 2021 Schedule For Expansion of Residential Parking Adjusted To Include More Districts
State of Emergency in the Czech Republic To End On Sunday »