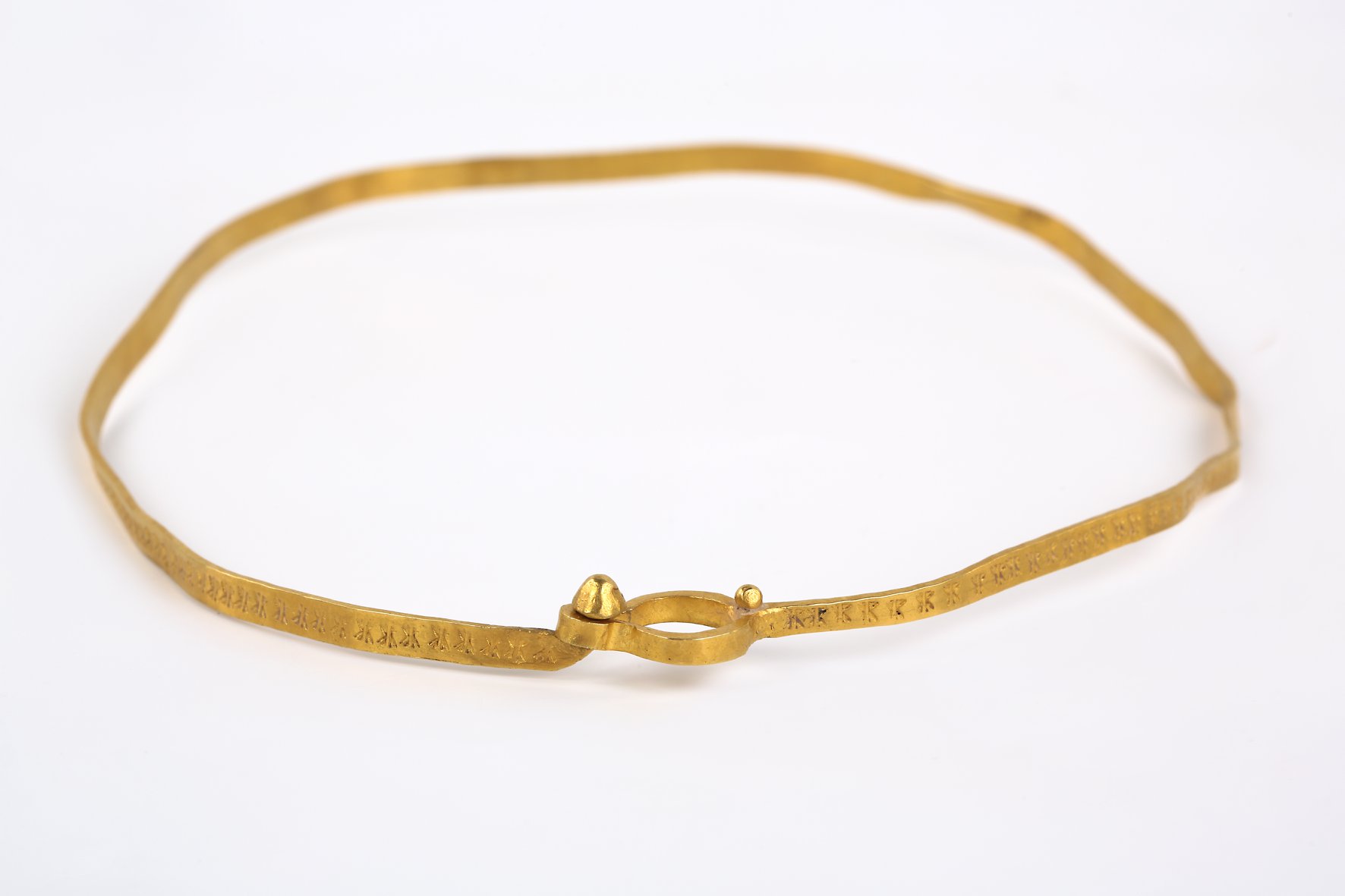 An historical mystery from Roman times in the Ždánice Forest southeast of Brno, where amateur treasure hunters found a gold necklace dating back to the Late Roman period in the 3rd-4th centuries AD. However, archaeologists did not find any other archaeological evidence of Roman presence at the site to better explain the origin of the necklace or why it was in that location. Photo credit: UAPP Brno via Facebook.

Brno, Jun 2 (BD) – Amateur treasure hunters Lukáš Kotásek and Tomáš Lusk contacted the Brno Institute of Archaeological Conservation (UAPP Brno) immediately after their unusual discovery in the afternoon of January 9th, 2020. Archaeologists quickly went to the site and eventually excavated an area of 2.5 meters, but found nothing else. “The purpose of the dig was to check for a secondarily damaged (robbed) grave, which could have been the source of the prestigious artifact,” said representatives from the Institute of Archaeological Conservation. The area was also examined with a metal detector, again with no result.

According to Kotásek and Lusk, the necklace was found about 20 centimeters below the surface. The site had caught their attention due to a previous discovery at the same location, of a set of coins from the period of the Thirty Years’ War.

The discovered necklace, weighing 32 grams, had a pear-shaped fastener at one end and a button at the other. It was made of a thin flattened gold ribbon and decorated with an irregular stamped ornament. Orientation measurements showed a purity of 900/1000, with a slight admixture of silver and copper. The discovery was unusual, considering it took place in the territory of the so-called Central European barbarian.

According to UAPP, necklaces with pear-shaped closures made of precious metal appear most often in the richly-adorned tombs of the Late Roman period, but could also be found in settlements from the latter end of this period in the 3rd-4th centuries AD. This type of jewellery has never been found in Moravia before, though necklaces of this type have been discovered in the surrounding areas to the west (Bohemia), north (Poland, Germany), and east (Slovakia).

According to archaeologists, the necklace may have been moved from a nearby unknown tomb, lost, or buried as a votive offering for religious reasons. “All these and other hypotheses must be taken into account. However, it may also be the case that the true story of the fate of the necklace will forever be shrouded in mystery,” said the archaeologists of UAPP Brno.

https://brnodaily.com/2020/06/02/brno/gold-necklace-from-roman-times-found-in-a-forest-near-brno/https://brnodaily.com/wp-content/uploads/2020/06/gold-necklace-found-in-forest-credit-Uapp-Brno-Facebook-2-1024x682.jpghttps://brnodaily.com/wp-content/uploads/2020/06/gold-necklace-found-in-forest-credit-Uapp-Brno-Facebook-2-150x100.jpg2020-06-02T10:13:00+02:00BD StaffBrnoNewsBrno,NewsAn historical mystery from Roman times in the Ždánice Forest southeast of Brno, where amateur treasure hunters found a gold necklace dating back to the Late Roman period in the 3rd-4th centuries AD. However, archaeologists did not find any other archaeological evidence of Roman presence at the site to...BD StaffBD Staff team@brnodaily.czAdministratorBrno Daily - English News and Events in Brno.Brno Daily